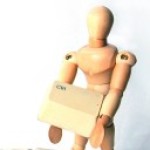 If you've got spent, empty film cassettes lying around collecting dust, Photojojo has a crafty idea for the mindful re-user: make them into rolled invitation or stationery holders.

It's quite simple: cut and decorate 1.375″ x 11″ strip of paper, pop the top off the film cassette (you can use a bottle opener) and tape the inside end of the strip to the film spool. Wind the paper into the cassette and leave a tab for the recipient to unfurl the message.

Reuters to Use Robotic DSLR Cameras for Olympic Coverage

Sports photographers use a variety of techniques and gear to shoot from different angles that are less accessible to the photographers during action: wirelessly triggered cameras mounted behind backboards, perched on overhead catwalks, clamped on the ground. Reuters photographers Fabrizio Bensch and Pawel Kopczynski decided to take the technology of remote photography to another level for the upcoming 2012 Summer Olympics with robotic cameras.

Lytro has been pushing to make their living pictures -- interactive, clickable photos that have a variable focus point -- easier to share. Lytro is a camera that has a very specific, proprietary way of saving and viewing photographs, so sharing these photos can be tricky. Nevertheless, Lytro has been able to quickly expand living photos across the web through social media, most recently to Google+ and Pinterest through Google Chrome extensions.

Street Photos of Commuters Reading on the Subway

The UK government issued an updated copyright policy statement today that's intended to modernize copyright law in a digital era. But here's where those traditionally protected under copyright -- authors, poets, artists, photographers and so forth -- begin to cringe: sweeping definitions of "orphan works" and Extended Collective Licensing could allow companies to buy chunks of content without compensating original authors.

Tired of your boring Nikon point and shoot? Does the sleek modern silver clash with your vintage threads? Breathe easy: German company PimpmyDigicam offers these sticker "leather kits" for Nikon J1 cameras for a retro look that will pair impeccably with your vintage Oxfords.

Photographer Benjamin "Von Wong" has pulled of a flashy feat with fire: a multiple exposure shoot of a pyrotechnician at work -- all photographed and produced in his Nikon D800. That's right -- all in-camera, no stacking in Photoshop.

A UK couple is very displeased after their wedding photographer lost all the images from their wedding during a scuffle in a pub.

Jackie and Anam Sanderson enlisted a friend, Ben Fagan, to take wedding photographs -- mostly to his benefit, they said, to boost his portfolio. But after the wedding, Fagan placed the card in his wallet and lost it a week later -- though he doesn't have a clear memory of when or where. Unfortunately for the couple, who had a small wedding service with just 60 guests, Fagan was the only one taking pictures, save a few blurry photos taken by guests.

Instagram's latest 2.5 update has swapped out their "popular" tab for a new "explore" feature which allows users to browse photos based on users and hashtags -- it's a more functional search system. Now, instead of seeing photos that have the most likes, users can search for hashtags based on events and topics, which also makes it possible for users to have wider circulation of their images.

Editor's note: This post contains graphic photos that some readers may find disturbing.

Javier Manzano is a freelance photographer currently based in Afghanistan -- no stranger to documenting conflict. He received a 2011 World Press Photo award for an image from his 2010 work in Ciudad Juárez, Mexico. The border city has been embroiled in a drug war since 2008 when the Sinaloa cartel moved to take over Juárez -- located just over three miles from El Paso, Texas. Violence broke out between warring cartels, gangs and police. In 2010, Juarez recorded over 3000 homicides.

Javier Manzano: I was born and raised in Mexico and moved to the United States at the age of eighteen. Soon after graduating from college I landed a job at an advertising agency where I worked in for several years. The events that unraveled early on the morning of September 11, 2001 would change our lives forever. For me, it meant quitting my job and returning to school for what I believed was my calling in life – journalism. After completing several newspaper photography internships y became employed at the Rocky Mountain News in Denver, CO. The paper folded in 2009 and over 200 people were laid off. Since then, I've worked as a freelance photographer producing a wide range of material, from editorial and commercial photography, to news and documentary films.

The last time C. Corey Fisk walked was in 1992. She has multiple sclerosis, an incurable disease that affects the central nervous system and gradually took her ability to walk and leave her bed.

But early February, she went on a photo walk with photographer John Butterill in the woods behind his house in Ontario, Canada -- all from her own home in northern California.

A Polish collector claims he's found an extremely rare daguerrotype of composer and pianist Frédéric Chopin, taken in his final repose in 1849.

If the image is authentic, it would be one of only three photographs of the composer, including the image of him alive in 1846, above. And it would be the only known original daguerrotype in existence -- all other images are duplicates.

What was supposed to be a routine press preview of the Turner Prize exhibition in London turned a two-hour standoff between photographers and Tate Britain gallery contract-wavers.

Press photographers refused to sign a problematic form at the door that required them to guarantee their images would not "result in any adverse publicity" for the host gallery and reportedly signed away permission sans-royalties for gallery publicity.

Instead of securing a monopoly over the favorable images produced at the event, the gallery succeeded in the opposite, mucking up press relations in a very public way.

Future Cameras May Be Equipped with Invisible Flashes

Future generations of photographers may one day look back and wonder why we often blinded each other with painfully bright flashes of light for the sake of proper exposure.

NYU researchers Dilip Krishnan and Rob Fergus are working on a dark flash that eliminates the "dazzle" effect of regular flashes in a low-light room. They've created this camera rig that combines common infrared photography techniques with an ultraviolet flash that produces a dim purple glow instead.

The team placed an infrared filter on the lens of the Fujifilm S5 Pro, which is has a modified CCD sensor that specializes in IR and UV photography. To supplement existing UV light, the team created a modified filter on an external flash to emit only UV and IR wavelengths.

Some of the most raw, intimate and iconic photographs of the Civil Rights Movement were taken by photojournalist Ernest C. Withers. He was present during the entire Emmett Till trial, when Martin Luther King, Jr. rode the first desegregated bus, and in the hotel room where Dr. King was assassinated. Many civil rights activists would cite Withers' images as key to informing America of their plight and fight for equality.

But recent reports by Memphis publication The Commercial Appeal indicate that Withers, who passed away in 2007, was also informing the FBI -- on their payroll.

The Commercial Appeal posted documents indicating that while Withers was photographing key members of the movement, he was also acting eyes and ears for a now inoperative wing of the FBI that heavily tracked civil rights activists.

Due to a clerical error revealing Withers' informant number, reporters at The Commercial Appeal were able to connect Withers' name to informant activities.

If you tried to visit the Nikon Rumors site this morning, you’ve probably gotten …

Wedding Photographers Get Grooms Excited by Bundling iPad with Albums

Some wedding photographers offer a package that includes an iPad pre-loaded with images from that special day.

It's a simple, yet brilliant way to get both bride and (especially) groom more excited about the album -- while assuring their photos won't lie forgotten in a dusty album years later.

The digital trend is catching on, said Pennsylvania-based photographer Daniel Lanton, who bundles the iPad with engagement photos. Lanton said in an interview with Tampa Bay Online that the iPad it adds a bit more immediacy to the images, as well as a sort of permanence in a new digital age:
"I just foresee a time when the wedding album becomes non-existent or continues falling away ... Now I'm selling more iPads with bound albums. I sold six in the first week."