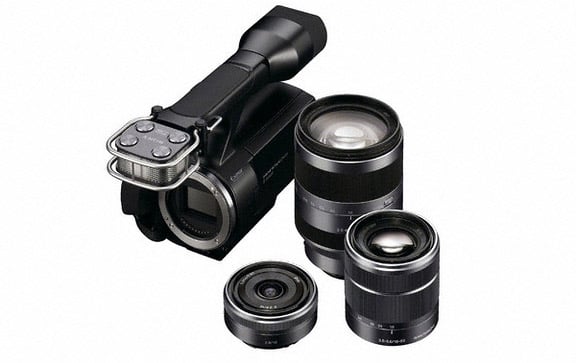 Canon and Nikon broke ground when they launched DSLRs that have HD video capabilities. Now Sony’s taking a different approach by offering a comparatively affordable HD video camera with all the attractiveness of interchangeable lenses, plus the ability to take high resolution stills.

Sony revealed its plans to release a camcorder with the same interchangeable lens system as their NEX series cameras this past May, but announced today that the NEX-VG10 will be available in September for around $2000.

Not only will the camcorder share the same Sony E-mount as the NEX series (it comes standard with a kit 18-200mm f3.5-6.3 lens), Sony DSLR owners will be pleased to know that with a separate adapter, the camcorder can be mounted with any A-mount lenses — including Sony G and Carl Zeiss lenses.

The camcorder also has the same Exmor APS HD CMOS sensor as the NEX-3 and NEX-5. The DSLR sized sensor alone gives the camera a lot of extra real estate to work with; Sony boasts the sensor to be approximately 19.5 times larger than the standard sensor of conventional camcorders.

The NEX-VG10 can shoot 1920×1080 high def video at 60 fps, which Sony says is ideal for Blu-Ray recording. And for stills shooting, it can capture 14 megapixel images with a continuous burst of up to 7 fps.

Some benefits of using the NEX-VG10 over a video DSLR is that the camcorder has the right ergonomics and image stabilization for shooting video, and doesn’t have the same limited clip time that plagues DSLR video shooters — it can shoot up to 315 continuous minutes. Also, Sony says the NEX-VG10 has a silent auto-focus system that could cut down on noise typical on video DSLRs.

Stills shooters may appreciate the camera’s Auto HDR mode, but the fact that it doesn’t shoot RAW images could be a dealbreaker.

You can pre-order the NEX-VG10 from Sony Style.

Update: Here’s a Sony promotional video with some demo footage shot with the NEx-VG10. It’s a bit hard to judge the full quality of the video, since the YouTube upload isn’t in HD, but it’s a decent overview of what the camera can do.