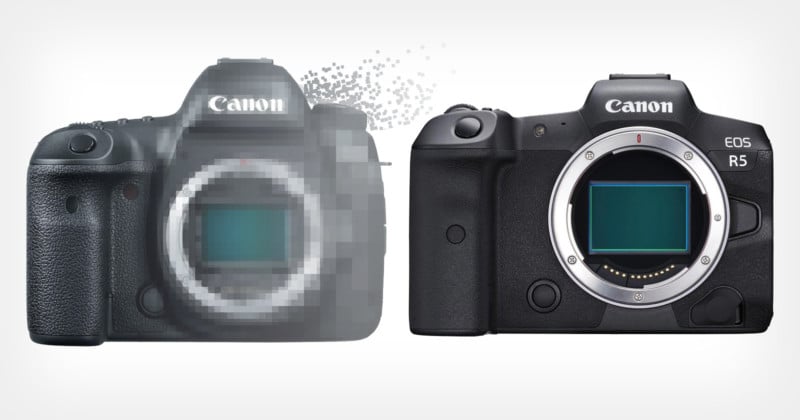 With 2021 well and truly over, those manufacturers that align their finances to the calendar year are now producing their financial reports. Canon’s latest figures reveal strong and sustained performance, even during the pandemic, which is a result of its shift to mirrorless camera manufacture and facilitating the beginning of a new market dominance.


Here is a look into what Canon’s latest financial report reveals about the company’s current status and trajectory in the camera industry.

The Death of the DSLR and the Rise of Mirrorless

The emergence of the COVID pandemic came at the wrong moment for a camera industry already rocked by the implosion of sales that led to a massive contraction of the market and exodus on once-household names. It didn’t start there, as the seeds sown by Sony with the release of the E-mount and subsequent Alpha 7 called the death knell on the DSLR.

What is evident more than ever – and particularly looking at the CIPA shipment data for 2021 – is that the mirrorless camera is now the beating financial heart of the industry, accounting for 38% of units shipped but 67% of value. In fact, the news comes thick and fast: Ricoh tries a “workshop-like” production model for Japanese DSLR customers, Canon shuts down its last remaining Chinese factory (Zhuhai) largely ending integrated camera mass production, and the BCN Awards show that Canon and Sony are stealing the show.

This is a pivot like no other the industry has seen, and it is largely split into two camps: Sony, Fuji, Olympus, and Panasonic all developed viable mirrorless systems from the get-go in the early 2010s and have seen success to a greater or lesser extent. Canon, Nikon, and Pentax tried alternatives that were predominantly failures because they were never intended to replace their money-making DSLR.

Canon and Nikon have had to replace their camera systems at a time of dramatically falling sales, diminishing market share, and now COVID.

A Look Into Canon’s 2021 Financials

So how did Canon fare? The headline results from the whole business are an 11.2% increase in net sales to ¥3,513 billion (~$30 billion), up from ¥3,160 billion and ¥3,593 billion in the pre-COVID 2019 year, almost bringing it back to parity. Operating profits rose 155% to ¥282 billion and beat 2019 by some margin. This is a result of increased sales in 2021 but significantly lower costs than 2019 resulting from medium-term restructuring (and you have to imagine that the Zhuhai factory closure was part of this).

It’s worth noting that Canon has restructured the reporting of its divisions; strangely Inkjet Printers used to operate within Imaging, but this has now moved to Printing, a division renamed from “Office” and incorporating all its print technologies. Canon makes all comparisons retrospectively so that the requisite groups are in the right divisions.

Canon goes on to provide more detail around its Imaging Division, splitting its products into “Cameras” and “Network Cameras & Others”. “Network Cameras” account for 34% of net sales, although the general “Cameras” area is of more interest and saw a 24.6% increase in net sales. Canon confirms sales of 2.74 million interchangeable lens cameras, a drop of 1% versus 2020.

CIPA data for 2020 reports a total of 5.27 million units shipped, close to Canon’s figure of 5.38 million, which the company believes will increase to 5.65 million units. It also suggests that Canon holds around 52% of the whole ILC market, a remarkable achievement. Canon also confirms 1.15 million compact camera shipments, representing 38% of the CIPA shipment data and fairly close to the 34.1% shown recently in the BCN Award data.

The Camera Industry in 2022 and Beyond

Given that mirrorless cameras are the only category that increased shipments, my expectation is that mirrorless units may see shipment growth to around 3.5 million units. Canon will want to be grabbing as much of that expanding mirrorless pie as possible and — surprisingly — projects grabbing it all! As I’ve noted before, and perhaps counter-intuitively, Canon expanded DSLR sales in 2021 at the expense of Nikon, so it may be looking to sell further into this market.

If — and it’s a big if — the BCN Award market share illustrates a wider trend, then Canon will need to be taking market share from Sony. This seems unlikely given both historic performance and the release strategies of current manufacturers.

The mirrorless market is not like the DSLR market where Canon and Nikon have long dominated and Canon has potentially increased its share to around 60%. There are numerous, successful, manufacturers who still take significant sales and, to a large extent, aren’t competing directly with Canon. Olympus, Fuji, and Panasonic all fall into this camp and none (with the exception of the Panasonic S1) produce a full-frame range, yet have significant sales. Along with Nikon, this group makes up 50% of mirrorless shipments, a significant proportion.

With the Zhuhai factory closure, it’s interesting to see that compact camera shipments for 2022 are predicted to decrease to 600,000. Expect to see many low-value models pulled from the shelves as Canon increases its focus upon the higher value, higher profit, segment.

Overall, this is a compelling set of results for Canon that shows a highly successful pivot to mirrorless, shuttering of its compact cameras, and the consolidation of resources. Its single most important goal is to establish a greater market share in the mirrorless sector, with one eye still on the DSLR.

If there was one question in the back of Canon’s mind, then it might be this: is the old dog dead? The slowing of the DSLR implosion suggests there might well be a long tail (oh dear!), so is the unthinkable possible? Might we see a new (non-flagship) DSLR model hit the shelves? It might not happen in 2022, but we’ll know more about how the DSLR and mirrorless sectors are performing by the end of it.