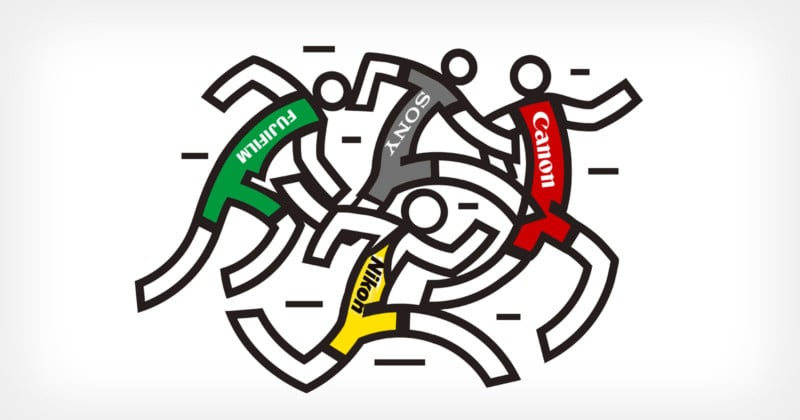 The BCN Awards are a stalwart in the annual calendar as they recognize sales achievements for (among others products) camera manufacturers. While they only account for the Japanese market, they provide a marker for how well manufacturers are doing. So what are the big takeaways this year?

BCN Rankings: A Bellwether of the Camera Industry

Before we get on to the winners and losers in this year’s award — and ultimately as a bellwether for the industry as a whole — it’s worth revisiting what BCN actually does. They are interested in a number of different high-tech industries — not just cameras — and monitor online and in-store sales data from participating retailers.

The raw data is paywalled, which means you need a subscription to take full advantage of what is a detailed set of information, but every January the BCN Awards celebrate sales achievements across the full range of tech sectors. For camera manufacturers, there is particular interest in integrated, mirrorless, and DSLR segments, although there are also video and action cameras.

It is worth remembering that BCN only represents sales in the Japanese market and then only for retailers that feed data back to them. We don’t know who they are, but it is thought they represent about 40-60% of Japanese sales; that means we don’t know what is happening across Asia, Europe, or North America, although Japan is a good barometer for how well companies are doing even if the mix of sales might vary between regions.

So how did 2021 shape up for manufacturers at the BCN Awards?

Compared to last year there is a dip for Canon with Fuji holding steady while Sony continues to climb, but this is likely to change with the closure of Canon’s Zhuhai factory, which primarily produces its integrated cameras.

More importantly, integrated cameras now only make up 36% of total camera shipments (as recorded by CIPA) and just 15% by value. It’s a hollow win for Canon and one it is likely to be relinquished in the next one to two years.

For DSLR cameras, we see Canon increase its dominance (59.8%), Ricoh (Pentax) near doubling its market share (5.8%), and Nikon losing out by dropping to 33.9%. Again, DSLRs are a declining market (26% by shipments and 18% by value) but still important.

It’s bad news for Nikon, as this remains a small but vital source of income for their Imaging division. Are Nikon shipping fewer DSLRs or are consumers buying less of them? It’s difficult to know, but either way, it’s potentially a drop of some 230,000 units; not a trivial number.

Conversely — and perhaps counterintuitively — Canon could actually have sold more DSLRs last year than in 2020! The other good news is for Ricoh (Pentax); I recently questioned their strategy shifting away from mass-market production in Japan, but these results suggest that it potentially moved upwards of 120,000 units last year.

Maybe, just maybe, Ricoh believes it can appeal to a small sector of consumers that have no intention of shifting away from DSLRs in the same way that we see Leica making rangefinders or the increasing popularity of film cameras. Either way, it is good news for Ricoh.

Of course, the prize in the digital camera market is mirrorless sales. Petapixel has already reported on annual CIPA shipments for 2021 and how mirrorless cameras now make up the single largest number of units shipped (38%), representing 67% by value.

This is largely a repeat of last year, except Sony and Canon have both increased their shares. Sony went up 4.5% and Canon 4.6% while OM dropped a whopping 10.7% which means OM is losing sales to (principally) Fuji and Nikon.

Of course, Nikon is the elephant in the room: where are they? While Sony and Canon are increasing their market share, Nikon is yet to register in the top three and, tellingly, has less than 12.7% market share. That’s desperately bad news for Nikon which seems unable to shift its market share (at least in Japan), but represents a solid result for Canon and Sony.

How Camera Manufacturers Are Faring in 2022

What do these latest sales numbers say about the emerging mirrorless market and how 2022 might shape up? It seems to be business as usual for Canon and Sony.

Canon, in particular, has managed to evolve its sales rapidly toward mirrorless. However, another way of looking at this is that Canon’s sheer dominance in global sales (demonstrated by its DSLR sales figures) is simply reflected in the way it’s been able to pivot a proportion of its consumers over to mirrorless.

Maybe Canon isn’t moving any quicker than Nikon, it’s just that it has more customers. In that sense, Sony might be witnessing the calm before the storm; will its sales figures simply be swallowed up as Canon ramps up production, transitioning more users over to mirrorless? That remains to be seen and, in the interim, there is everything to play for in terms of attracting new customers.

Of course, this doesn’t help Nikon which is seeing its DSLR sales plummet while its mirrorless sales remain flat. Is this a case of not getting enough cameras on shelves (a mix of COVID and chip shortages) or are consumers deserting it? The latter would seem harder to fathom given the quality of the Z system and the number of Nikon users, however the longer its figures are stagnant the less confident the market will be.

It’s difficult to say too much about Fuji, other than it is obviously selling compact cameras (!). Likewise, Panasonic doesn’t feature in the three main categories although it romped home with the video camera award taking 43.6% of sales, followed by Sony (26.3%), and DJI (11.2%). Quite which cameras fall in this category and how many global shipments they represent remains to be seen, but Panasonic is clearly playing to its strengths.

That leaves OM Digital (cameras formerly known as Olympus) with a real drop in sales in what is an expanding sector. That represents a significant blow to its new owners as they try to balance the books and generate a steady stream of income; that said, it still potentially represents in excess of 250,000 units which, if it can keep development going and its user base happy, could make for a fair business.

All eyes will be on ensuring production can return to normal levels. Sony and Canon are scrabbling for share, and Nikon is trying to establish a solid footing. Ricoh is trying to make the best of what remains of its camera business, but don’t expect it to remain in its current form for too much longer. What will OM Digital’s move be? I hope we will see some new products begin to flow, but that will very much depend on R&D investment.

If nothing else, 2022 promises to bring more change to an already-tumultuous camera industry.