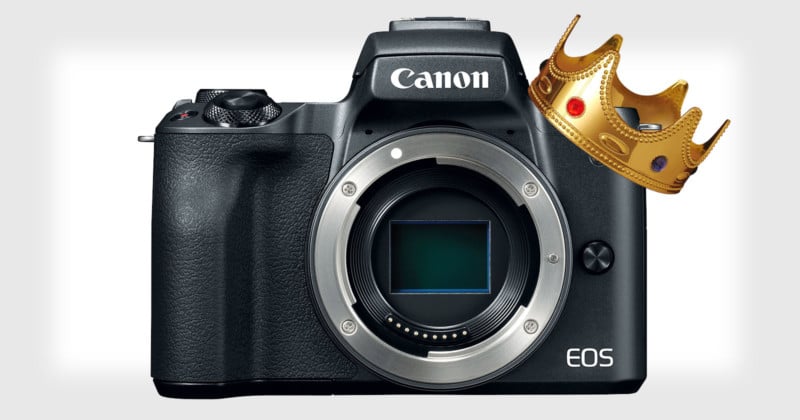 Canon Rumors reports that in reporting its 2018 2nd quarter financial results recently, Canon claims that it has taken the #1 spot in mirrorless camera market share over the first half of 2018.

The APS-C Canon EOS M50 is apparently selling well enough to the masses to beat out the technologically impressive cameras by competitors such as Sony (which won “Camera of the Year” for the a9).

Currently priced at $629 for the body only or $699 with a bundled 15-45mm kit lens, the EOS M50 competes against other affordable mirrorless cameras and entry-level DSLRs in targeting casual photographers and the general consumer, and it enjoys the advantage of having Canon’s long-established brand recognition in the photo world.

“In the second quarter, sales were driven by the EOS M50, a strategically positioned mirrorless camera,” Canon states. “Despite being an entry-class model, it incorporates features found in more advanced cameras while delivering easy operation for beginners. Through this, we are bringing new users into our ILC ecosystem.

Canon says it will further strengthen its camera lineup by announcing new products in the second half of 2018. Canon already said that it’s willing to cannibalize its DSLR business to gain further mirrorless market share, and with Nikon’s new full-frame mirrorless system just around the corner, Canon’s announcement is likely coming soon as well.

Update: Nikkei reports that in the system camera market, Sony now has a 13.3% market share compared to Canon’s 49.1% and Nikon’s 24.9%. (via sonyalpharumors)

You Can’t Do War Photography From a Distance