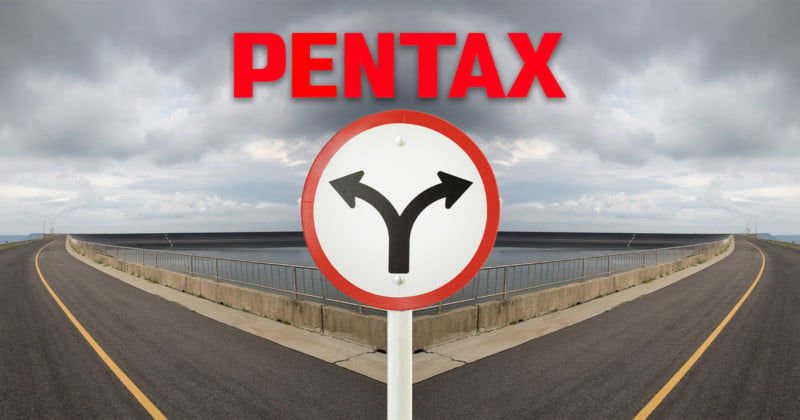 Ricoh seemingly made the significant announcement that it would cease the mass production of digital cameras (which includes the Pentax brand), shifting instead to a direct-to-market model. For now, it only affects its business in Japan, although the ramifications could affect its business more widely. What does this mean for Ricoh (and Pentax) and their future?

Editor’s Note, Update 1/21/2022: After publication, and nearly 24 hours after this story broke, Ricoh USA was finally able to provide some clarity into the situation. Ricoh Japan will be adding its bespoke, direct-to-consumer model to its existing network of distributors, not replacing it. While this changes things, it does not take away from the story below and we believe the discussion and points raised on the issue are still valid.

Ricoh put out news of significant restructuring to its camera business beginning in April 2022. This came directly from Ricoh in Japan and was not formally announced on their English news pages or by any of their regional sales offices, as that division has now clarified that it applies only to the Japanese market. That said, it was released by Noboru Akahane, current President and CEO of Ricoh Imaging. It’s worth noting that Akahane was Ricoh Imaging President from 2012 to 2017 before moving to Corporate Vice-President of parent company Ricoh, then moving back to Ricoh Imaging in November last year.

So, what does the announcement actually cover? Based upon a translated version, it is worth highlighting some significant points. Akahane begins with the following:

I feel that the conventional method based on mass production and mass sales is becoming less accustomed to the recent changes in the market environment.

Let’s dive into this a little deeper; the graph below shows digital camera shipments (and value) since 2003 and highlights the 2011 high in the industry when the number of units shipped peaked at 120 million before imploding back to a new low in 2021 of 8.3 million. 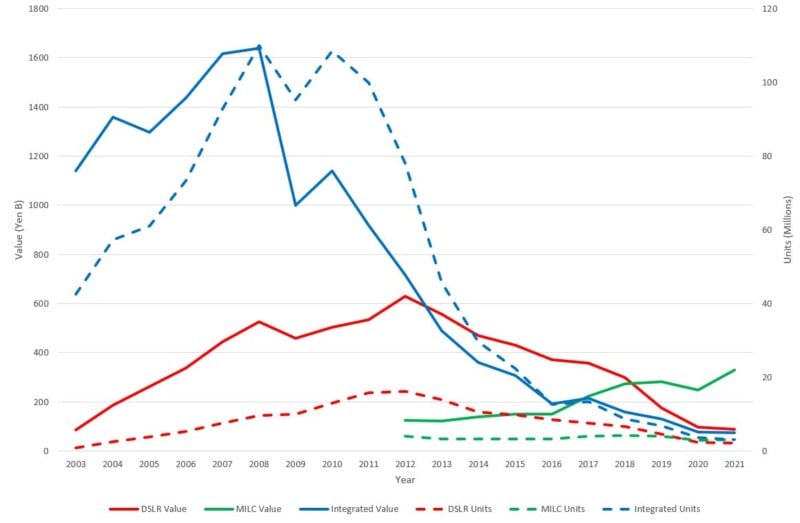 Ricoh’s purchase of Pentax in 2011 for $124 million from Hoya probably seemed like a great deal, particularly as shipment values of DSLRs rose to an industry high of ¥628 billion in 2012. Pentax was also riding with the release of not one, but two mirrorless systems and had a highly successful medium format system.

Unfortunately, that isn’t how it panned out for Ricoh with both mirrorless systems largely seen as ignominious failures, at a time when Sony was successfully pushing the mirrorless full-frame format and DSLRs had begun their decline. In 2019, mirrorless cameras out-valued DSLRs followed by out-shipping them in 2020. With Canon and Nikon ceasing DSLR development and all but exiting the market, Pentax has been left to pick up the pieces of a dwindling sector.

That’s not to say that there isn’t money to be made in DSLRs; there is, and the 2.2 million units shipped in 2021 are testament to that. But it is a rapidly diminishing pie and it remains to be seen what it ultimately will be worth. In 2020, BCN reckoned Pentax had about 3% of the DSLR market in Japan which may equate to about 100,000 units globally (compared to possibly around 1.2 million in 2012).

This is Akahane’s point: there is no money to be made in the mass production of DSLRs. They are yesterday’s technology and, in the same way that we’ve seen integrated camera sales all but erased, the same fate awaits the DSLR. Of course, while it appears that Akahane has been sent in to balance the books at Ricoh Imaging, you have to ask how they got into this position in the first place under his tenure during the critical years from 2012 to 2017.

Ricoh as a whole employs about 90,000 people worldwide with a turnover of about $20 billion, however, it is primarily a printer and copier business which it then integrates horizontally with software-based document management. Ricoh Imaging falls into a division that manufactures electrical components which, as a whole, only accounts for 8% of sales. In short, Imaging is a small fry within the whole business and would appear to be unsustainable in its current form. Understanding the nuances of the Imaging division’s profit and loss is difficult, though, given that they are subsumed within a much larger division.

Within this context, Pentax’s DSLR “brand vision,” announced in 2020, makes more sense. Running with the strapline “Pentax believes in the future of SLR photography,” it espoused a single-minded commitment to its existing DSLR lineup, highlighting the quality of manufacture with a particular focus upon the optical viewfinder.

There is one big takeaway from this: don’t expect a mirrorless Pentax; it’s DSLR all the way. This announcement would appear to be a financially driven imperative. Developing a new camera system is expensive, as evidenced by the commitment made by Nikon and Canon. There is simply no backing internally for this, given the competition between Sony, Nikon, and Canon amidst a shrinking market. If you are not going to develop a new system and the market is shrinking to the point that mass production is no longer viable, what are the alternatives? Akahane presents a two-pronged strategy:

It’s worth reiterating that this is a Japan-only initiative — at the moment. In a manner similar to Nikon’s medium term strategy, Ricoh wants to bypass traditional marketing channels with direct-to-customer interaction. With a dedicated user base, this makes sense, although how effective it is in appealing to new markets remains to be seen. More importantly, it is less about having cameras on shelves in-store and more about interacting directly with the customer by selling online or through its first party stores. As PetaPixel notes, this is fairly similar to the way Leica operates.

The move to “workshop-like” manufacturing is more difficult to pin down until we see exactly what it looks like, however, Akahane notes that, “We will expand the range of various customizations to further reflect the needs of our customers.”

It is possible that you will be able to select your model online and then customize it to a greater or lesser extent. Quite how this will work remains to be seen, but it could follow one — or both — of two routes. Firstly, bespoke limited-edition models could be made exclusively available online in the way that Leica does. Secondly, it is possible that small batch runs of specific models could be manufactured to a base level before limited customizations are made after customer purchase. For example, think about selecting a top-end bicycle where you are able to select from a limited range of components to complete it. Ricoh clearly states that it is renewing both the manufacturing and sales systems in Japan.

A Lot of Unanswered Questions

There is one elephant in the room: Ricoh will still need to sell enough cameras, at the right price, to make it a viable business model. Back in 2016, Leica was selling somewhere over 100,000 cameras a year and, given the current climate, this is unlikely to have changed very much. This would appear to be the level Pentax is currently at; what proportion is sold to the Japanese is unknown although, as a whole, DSLRs ship about 5% to the region which may equate to about 5,000 units.

Perhaps the key question is whether Ricoh is using this as a test case to see whether it is viable to roll out to the whole of Ricoh Imaging. What happens in the Japanese market is important to the business as a whole, while the risk remains relatively low. Crucially then, the question remains: can Ricoh shift the same number of units using a “workshop-like” model as opposed to mass production?

It seems likely that the cost of a Pentax camera will have to increase, possibly heading towards the territory of a Leica. If this is the case — and we will have to watch closely once April arrives — we will have to ask ourselves this value proposition: is owning a Pentax worth that amount of money? Of course, we are viewing Pentax cameras through their “worth” today and by changing their production it is possible that Ricoh could also change their value. This could be a gradual metamorphosis, led by Japan.

Ricoh is rapidly approaching a fork in the road where it needs to make a decision. Income from the sales of GR and Pentax models is falling off a cliff, so the key question is whether it can bolster those sales in order to build a profit-neutral business. Is the shift to “workshop-like” manufacturing a sound business solution that could eventually be implemented to save Pentax as a brand, or does this mark beginning of the end? An end that would be a slow death for a once-great camera manufacturer that is scrabbling around trying to make ends meet. Or, will this presage a holding strategy for a potential future sale in the same way that Olympus has moved on to?

Either way, 2022 could be a defining year for Ricoh-Pentax.