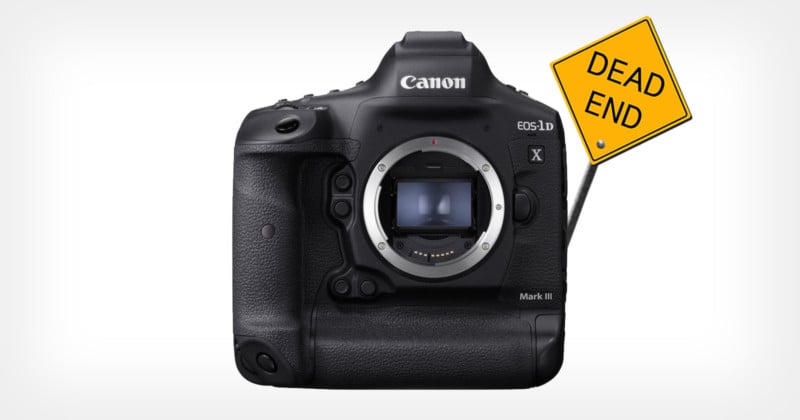 The age of Canon DSLRs is rapidly coming to an end. Canon has officially confirmed that the Canon 1D X Mark III will be its last flagship DSLR camera as it turns its attention toward a future of mirrorless cameras.

In a new interview with Japanese newspaper Yomiuri Shimbun, one of the five major newspapers of Japan, Canon Chairman and CEO Fujio Mitarai stated that the company’s development and production of flagship DSLRs will be wound down “within a few years.”

“Canon’s SLR flagship model is known as the ‘EOS-1’ series, the first of which appeared in 1989,” the article states. “The latest model ‘EOS-1D X Mark III’ released in 2020 will be the last model in fact.”

“The market needs are acceleratingly shifting to mirrorless cameras,” Mitarai states in the interview. “In line with this, we are steadily shifting people. […]

“Demand for beginner and intermediate SLR cameras is strong overseas, so we plan to continue development and production for the time being.”

The Canon 1D X Mark III was announced in January 2020 with a price tag of $6,499, and it continues to be a popular choice among professional photographers at major media outlets. Canon’s service facility at the Tokyo 2020 Olympics in Japan was stocked with row after row of the flagship DSLR.

While some publications such as Y.M.Cinema and Photo Rumors have interpreted Mitarai’s words to mean Canon has officially revealed the end of all of its DSLR lines, Canon has confirmed that the scope of Mitarai’s statement only extends to its flagship DSLR.

“As reported in the article, we plan to make future flagship models strictly mirrorless cameras,” Canon says in a statement provided to PetaPixel. “Naturally, we are considering an RF mount camera as our next flagship model.”

There are also no exact dates yet as to when the production of Canon’s flagship DSLR will come to a close.

“The broad details of Mr. Mitarai’s interview as described in the article are true,” a Canon spokesperson tells PetaPixel. “However, while estimated as ‘within a few years,’ exact dates are not confirmed for the conclusion of development/termination of production for a flagship DSLR camera.”

Canon may not have officially confirmed the end of all its DSLR lines in Mitarai’s statement, but Canon has been reiterating the fact that it sees its RF mirrorless camera mount as its future. The company stated in January 2020 that it is done making EF lenses unless the market demands more, and there has been a steady stream of popular EF lenses being discontinued since then.

There has also not been any new EOS DSLR announced since the Rebel T8i (AKA 850D) was unveiled in February 2020, and there is no word that Canon has any plans to release any more.

On the mirrorless front, however, Canon is making huge investments and ambitious plans. The company has rapidly been bringing popular DSLR lens focal lengths into the world of the RF mount, and the upcoming EOS R1 flagship mirrorless camera will reportedly be a “jack of all trades, master of everything.”

PetaPixel recently predicted that both Canon and Nikon are done making new DSLR cameras, and given how fully invested the rivals are in winning the mirrorless camera market, it would be quite surprising if either company released a new model going forward.