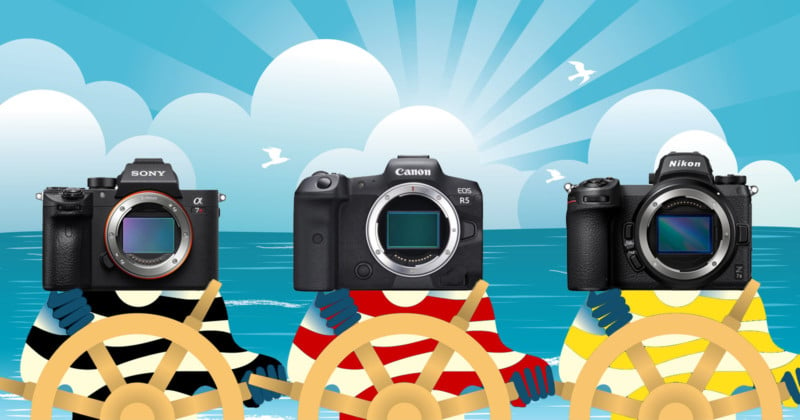 With an implosion of shipments caused by COVID in 2020, the expectation was that 2021 would see a rebound… until COVID hit again. So how have camera manufacturers fared in what has become another traumatic business year?


Editor’s update on 2/3/2022: CIPA has now released a confirmed December shipment figure of 686,000 giving an annual total of 8,362,000, an increase from the estimate below of 8,261,000. While changing nothing else in the article, it’s worth noting December was particularly good this year in comparison to previous years. This is likely due to surplus DSLR/compact camera stock and manufacturing capacity.

The implosion of the camera industry is no secret. In fact, the long drawn-out affair has been painfully watched by those both inside and outside the industry as year-on-year shipments of cameras dwindled from the heady heights of 120 million units in 2010 to the woefully desperate 8.9 million by 2020.

Of course, the detailed picture is a little more nuanced and is something I’ve discussed at length; of those 120 million units, 108.5 million were integrated cameras. In fact, the interchangeable lens camera (ILC) peaked in 2012 at over 20 million units, dropping to a pre-COVID 8.5 million by 2019.

Sure, that is still a significant drop, but nowhere near as profound as the overall figures suggest. And for completeness, it’s worth reiterating that the figures come from CIPA data, which are collated from manufacturer shipments.

So how has the past year unfolded for camera manufacturers? CIPA has just published the November shipments which are critical to understanding how the year has gone as it includes the big Christmas bump, however that does mean that December’s figures are still outstanding.

The chart below shows the last five years’ monthly shipment data (for combined integrated, DSLR, and mirrorless categories); in this instance, I have estimated the December 2021 data as 80% of the November shipment total. This is slightly optimistic as while this occurred in 2020, for the four years prior it was consistently 75%. The impact of the annual total will be minimal and gives us a very close estimate for the annual total. 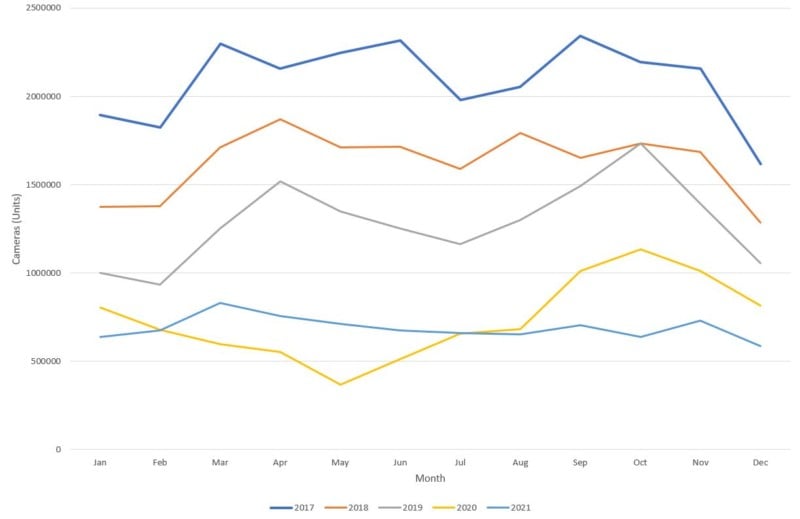 This shows an interesting picture for the year where the positive end to 2020 continued into 2021 and only dipped below 2020 levels by August when COVID and supply chain problems began to bite. Shipments then remained flat to the end of the year likely marking a disappointing Christmas season in terms of sales.

Overall shipments came in at 8.3 million, slightly down on the 8.8 million last year. How then does this fit into the overall picture of the number and value of shipments over the last 20 odd years, given that there has yet again been another drop?

A 20-Year View of Camera Shipments 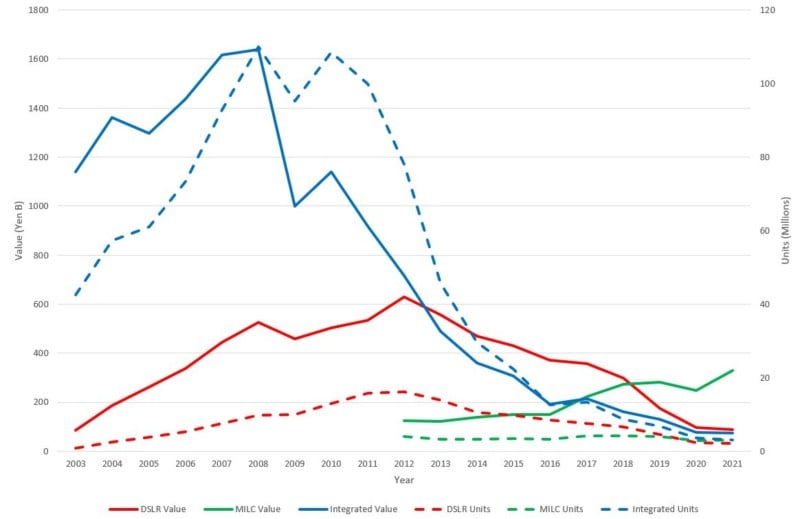 The picture for 2021 is perhaps even more interesting to view. For a second year running, mirrorless cameras out-shipped DSLRs; last year it was 2.9 million to 2.4 million respectively, while this year this widened at 3.1 million to 2.1 million respectively. This is perhaps not as big a fall for the DSLR as expected given that shipments dropped from 4.5 million units in 2019 and likely reflects a whole host of reasons.

Firstly, the DSLR market is now undoubtedly mature and people buy what they know, particularly given that they have already bought into the lens system.

Secondly, DSLRs are relatively cheap compared to their mirrorless counterparts, which in part reflects that nobody (other than perhaps Pentax) is releasing new DSLR models.

Thirdly, manufacturing is already in place for these models and uses older designs, meaning that they are probably easier to source and manufacture.

Like the DSLR, there has also been a drop in shipments of integrated cameras from 3.6 million in 2020 to 3 million this year which now means the mirrorless camera is the single largest category that is shipped.

The Mirrorless Camera Boom is Real

This is the first time since integrated cameras were recorded (in 2003) that it isn’t the largest category and shows how significant the shift to mirrorless has been. Not surprisingly then, the total value of shipments for integrated cameras and DSLRs has also dropped, although both have seen a slight bump in unit cost reflecting a rise in camera prices.

And finally to the elephant in the room… yes, the value of mirrorless shipments is a huge success story for the camera industry. The scale of this cannot be underestimated as it is the first time since 2010 that there has been a significant rise in anything related to camera shipments.

Given how compressed the graph is becoming, let’s look at that in more detail. 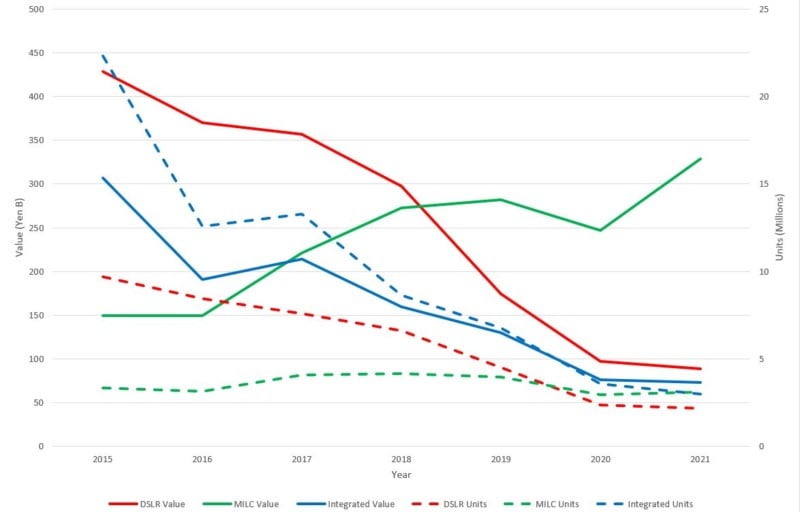 Shipments of mirrorless cameras — and more importantly the value of those cameras — undoubtedly increased as a result of newer models becoming available on the market, particularly from Nikon, Canon, and Sony. Given these production lines are relatively new and that component shortages have been widespread, the capacity of the market into 2022 could be considerably larger.

It also reflects pent-up demand in the consumer sector for purchasing new devices, a result of surplus cash in the economy and the plethora of new models that have been hitting the market. Expect integrated cameras and DSLRs to drop in both units and value as mirrorless models replace everything. It begs the question as to whether CIPA will continue monitoring DSLR and integrated segments, and therefore if we might see mirrorless being subdivided, perhaps into price brackets.

The only conclusion you can come to is this: if as a manufacturer you’re not into mirrorless, then you don’t have a future.

Nikon and Canon have stopped the development of DSLRs and are making money where it is easy and cost-effective, but make no mistake, there will be limited or no future development. Nikon has already pulled out of the integrated camera market and this might well be the smartest move; there are undoubtedly niche areas such as shockproof and travel cameras, but it remains to be seen if they will survive the smartphone onslaught.

It is now about having a compelling system and trying to Hoover up customers as they look to shift up. If supply problems can be mitigated, then 2022 has the potential to be an exciting year of sales, but more than that, understanding the three-way race between Nikon, Canon, and Sony will help get a better idea of which horse consumers are backing.