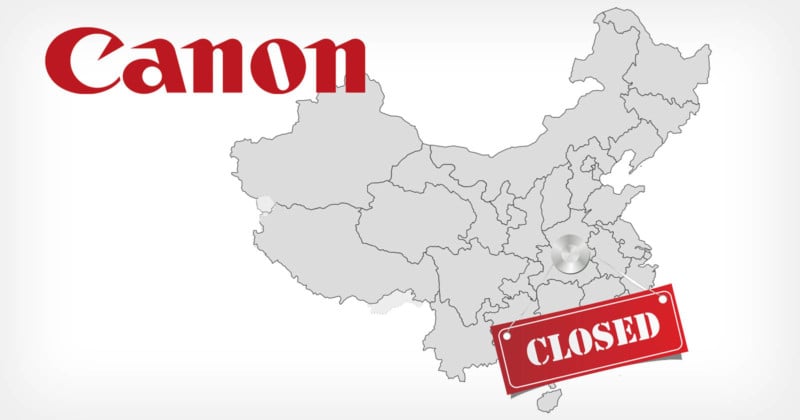 Another month, another camera factory shutters its production. This time it’s Canon with its remaining plant in China, and it can now be confirmed that it has gone further and will be closing — ceasing all manufacturing and shutting the factory.


This should come as no surprise given the way the camera market is changing and, in fact, it’s astonishing that it hasn’t happened sooner.

Canon Announces the End of Its China Camera Factory

Earlier this week Canon announced it was shuttering production at its Zhuhai plant in southern mainland China, broadly a result of the continued contraction of the camera market, ongoing problems with COVID-19, and the related chip shortage.

Here’s a statement Canon provided PetaPixel regarding the closure:

It is true that manufacturing at Canon Zhuhai will cease. With the guidance of the Zhuhai city government and High-Tech Zone authorities, discussions are currently underway with Canon Zhuhai employees, suppliers, and other affiliated parties. As these discussions are currently in progress, we cannot yet disclose any information. Further announcements will be made if and when deemed necessary.

The unit in Zhuhai was established in 1990 and is Canon’s only factory in mainland China manufacturing digital cameras. Canon also manufactures its (many) cameras in Taiwan and at its Oita, Miyazaki, and Nagasaki factories in Japan. Oita is its primary camera manufacturing plant and produces DSLRs, EF lenses, and camcorders, employing over 4,000 staff. It also leads in building and testing prototypes.

It is difficult to know exactly what was manufactured in Zhuhai, but as reported in the South China Morning Post, Canon China public relations representative Shen Yue commented that “because of the development of the smartphone, the market for compact digital cameras has been shrinking.” The Global Times reports, based on a source, that the facility “mainly assembles small digital cameras.”

I recently commented on how camera shipments have unfolded in 2021 for manufacturers based upon CIPA shipment data. It looks like 2021 will be a new low in terms of total units shipped at 8.3 million, down from that mesmerizingly high of 120 million units in 2010. However, that hides a diminishing but largely stable level of ILC shipments. This was principally DSLRs but is now largely mirrorless models.

The crash in camera shipments came from the integrated (AKA compact) camera segment resulting from the “pile it high, sell it cheap” mentality of the heydays. Let’s take a look at that in more detail.

What this clearly shows is the dramatic increase in shipments in the early 2000s as compact cameras reduced in price and became desirable consumer purchases. The market expanded massively with good — but decreasing — margins being made.

Revenue for the camera sector was principally driven by compact camera sales and is one reason for the dramatic expansion in new mirrorless cameras in the early 2010s where everyone manufacturer released new systems and Pentax released two! However, following the maxim of the “higher they rise, the harder they fall,” the industry came crashing down. Unit shipments were maintained through to 2011 but the value had already started imploding.

Four short years later, a sector that had been worth ¥1,600 billion (~$14 billion) had been reduced to around ¥300 billion (~$2.64 billion). Integrated cameras have been in decline year on year, but 2021 will be a landmark as the first time that integrated cameras weren’t the largest single category by unit shipments (and it’s worth remembering that — by value — this mantle was lost to the DSLR segment in 2013).

With only 3 million units likely to ship, mirrorless cameras are now the single biggest segment (38%), but what this hides is that mirrorless makes up 67% of shipment value, likely with better margins.

In short, compact cameras are a turkey because they have diminishing shipments and low margins, not a sector for technology leaders.

Canon’s Markets in the Camera Industry

What has this to do with Canon? The graph below shows the market share for the integrated camera as reported in the BCN Awards. Online and in-store sales data is collected by BCN Retail, although this only represents the Japanese market and only for retailers that report back to BCN.

It is thought that the data represents some 40-60% of domestic Japanese sales, which in itself represents about 15% of total shipments (as recorded by CIPA). Understanding Japan can help us understand the whole market.

It’s a point that Nikon understands all too well, having closed and merged many of its overseas factories and essentially stopping the production of all compact units. If you look at the company’s website, they now only list seven models; four bridge (superzooms) cameras, two point-and-shoots, and one shockproof model. Conversely, Canon is offering 13 models, a range of Powershot and Ixus compact and bridge cameras.

It’s also worth noting that Nikon threw in the towel with its 1 System, realizing sometime ago that this was like flogging a dead horse. There is only room for one mirrorless system and for Nikon that means FX and DX versions of its Z system.

There remains considerable discussion about the future of Canon’s EOS-M and while Canon procrastinates over a clear statement of intent (i.e. either kill it or expand it), users are more likely to look to other camera systems.

All of which brings us back to the Zhuhai factory and its closure. With its reported production of many of Canon’s compact models, the writing would appear to be on the wall for at least some of Canon’s current compact cameras. We know that the factory produces some 1 million cameras and 12 million lenses. Given Canon’s 40% Japanese market share, it is possible that it shipped up to 1.2 million units last year worldwide.

Are we about to see a dramatic reduction in its compact camera range? Is it also possible that the EOS-M system has reached the end of its life? The dust is still to settle on this particular factory closure, but it seems likely that it will mark a major shift in Canon’s Imaging Division and the cameras it produces.

The future is the mirrorless camera and manufacturers are restructuring to make this the focus of their business and, more importantly, a profitable one.