Another prominent figure in the photography industry is being accused of sexual misconduct. Several women are claiming that photographer and photo editor Patrick Witty sexually harassed them in a variety of ways.

The accusations were first reported in an exclusive story published by Vox, which investigated the circumstances surrounding Witty’s departure from his position as Deputy Director of Photography at National Geographic.

“In November 2017, several women at National Geographic pressured the magazine’s human resources department to investigate [Witty] for allegedly abusing his power in the industry for years to get away with predatory sexual behavior toward female colleagues, freelance photographers, and peers in the field,” Vox reports. But Nat Geo had already been investigating Witty for a month after there were anonymous murmurings of inappropriate behavior.

Witty quietly and abruptly stepped down from his position in December 2017, and no reason was given by Witty or the magazine about the departure. Witty announced his move on social media at the time: 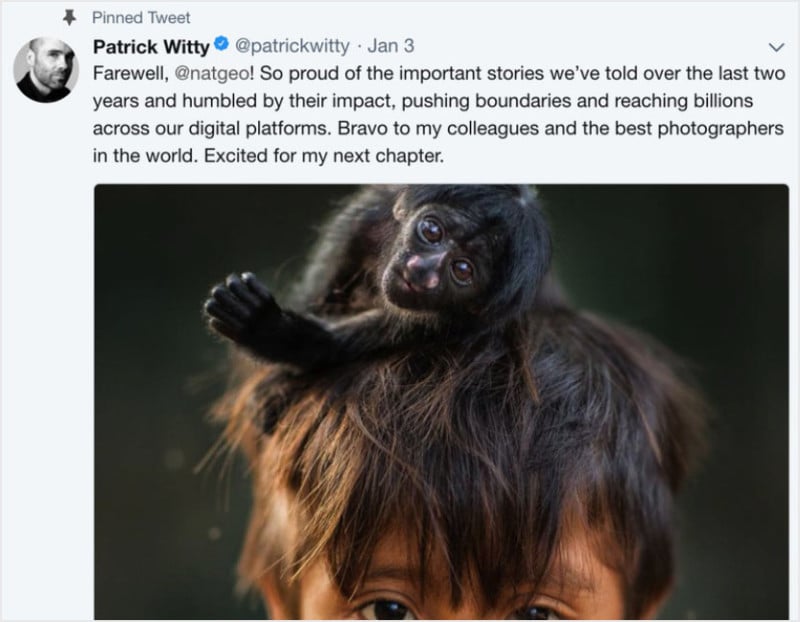 At the time he left, Witty was a prominent photojournalist and editor with notable jobs and achievements on his resume. Here’s a short bio written by Nat Geo in March 2016 when he was hired:

Patrick was most recently the director of photography at WIRED […] Prior to joining WIRED, Patrick was the international picture editor at TIME where he edited global visual coverage that won numerous awards and recognition from organizations including the World Press Photo of the Year, Pictures of the Year International, the American Society of Magazine Editors and the Society of Professional Design. […] Previously, Patrick was the international picture editor at The New York Times and was a member of the foreign staff awarded the Pulitzer Prize in International Reporting in 2009. […] His editorial work has appeared in publications including TIME, The New York Times Magazine, Vanity Fair, Stern and GEO.

Vox reports that accusations made against Witty include “unwanted touching, kissing, and other advances at a variety of professional events during and prior to Witty’s employment at National Geographic.” Witty is also accused of inappropriate behavior while serving as a coach at the exclusive and prestigious Eddie Adams Workshop in 2015.

Several of the unnamed accusers are freelance photographers and editors whose careers could be heavily influenced by Witty’s prominent positions.

“Multiple women say that Witty wielded this exact power over them when they rebuffed his advances, alleging that he threatened them with professional retaliation. Others said he put them in a position that damaged their credibility on the spot,” Vox reports.

While other prominent photographers (including Terry Richardson, Bruce Weber, and Mario Testino) have been blacklisted by the industry in light of accusations, National Geographic reportedly kept the matter quiet and allowed Witty to leave without making any public announcements regarding its investigation.

We reached out to Witty for comment, and he denies engaging “in any behavior that amounts to sexual aggression.” Witty says that he did not intend to ever be hurtful towards women and that he now realizes that his perception of a situation “may not always align” with someone else’s. Here’s a full statement Witty provided PetaPixel through his attorney:

I’m deeply sorry that some of my past behavior has been hurtful to women.

I was raised by six powerful women—five older sisters and my mother, now 86—who taught me to respect women and to fight for women. I’ve advocated and championed women’s advancement as photographers and editors my entire career.

With firm conviction, I deny that I’ve ever engaged in any behavior that amounts to sexual aggression. I also strongly deny ever insinuating that I would give someone professional help—or withhold it—on condition of sexual favors or romantic interest. I’ve never been accused of wrongdoing of any kind in the workplace, so I was shocked and dismayed when I first learned of the accusations against me.

But I’ve also come to realize that my perception of a situation and someone else’s may not always align. In many otherwise innocent interactions I may have underestimated the power of my position. What I’m hearing makes me think about the impact of my behavior on others in a whole new way, as it should. I am saddened to think that I in any way have contributed to or reinforced the imbalance of power between men and women in my industry.

We as a society are in the midst of a stark and imperative reckoning—long overdue—about the reprehensible ways men have behaved toward women all across our culture, as well as in particular industries like photojournalism, to which I have devoted my heart and soul for the past 25 years. This new dialogue is enlightening to me, as a man undergoing a much-needed awakening, and as a father who wants to do better by his own son in the hope that he’ll know, and help to shape, a culture of respect and equality for all. I wholeheartedly embrace and support this movement.

Witty has since gone dark. His Twitter has been deleted, his Instagram account is now to private, and his website only has a single entry. On his LinkedIn, Witty now describes himself as a self-employed freelance producer, editor, and photographer.

This Award-Winning Wildlife Photographer is Only 13 Years Old

Shooting a Magazine Cover with a Smartphone