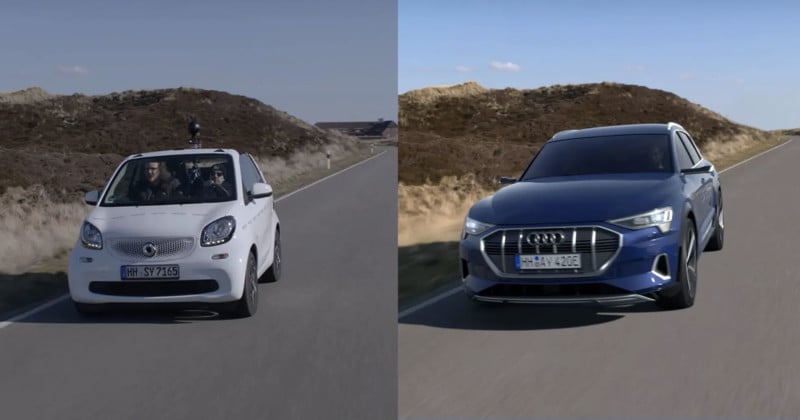 Thanks to the power of high-resolution 360-degree cameras and 3D compositing technology, production companies can produce full commercials for new cars before any model ever makes it off the line.

As explained in an Insta360 blog post, production companies can use a car-mounted 360-degree camera — in this case, an Insta360 Pro 2 that shoots in up to 8K resolution — to fully capture a car commercial before the target vehicle is even ready to be driven.

It’s hard to tell when this technique is being deployed because when it’s done correctly, the viewer likely won’t be able to tell if the car is there or not.

In this particular example, production company Harvest uses the Insta360 Pro 2 attached to the top of their “dummy” vehicle, and, because the camera can provide an unobstructed view of the surrounding area, the production team is able to track all the necessary shots and replace the dummy stand-in car with a 3D render of the desired vehicle. They are able to sync the 360-degree plates with 3D-generated graphics to create a finished render that looks like the real thing. Arlart says that recreating a perfect match of a filmed environment would typically be extremely time-consuming.

“Even scanning the environment, creating a 3D version of the environment on the fly, is only partially possible at the moment — it’s just an overwhelming amount of data, and endless hours of editing,” he says.

“Luckily, one can capture a 360 image, or a 360 video in our case, of the filmed environment. This immersive image/video can then be projected onto a 3D sphere.”

In the center of that sphere is the 3D model, which in this case is a stand-in car. “This solution is very lightweight, integrates the model nicely and the lighting and reflections of the environment on the 3D model are realistic. If the car passes a bright red house in the film, for example, this house will be reflected in the model, most notably in the paint and windows,” Arlart adds.

The dummy vehicle seats two Harvest employees: a driver and an operator for the virtual reality (VR) system. The dummy vehicle gets filmed in the shot while the 360 degree camera takes care of the surroundings. “In post, we tracked all the necessary shots, replaced the stand-in vehicle with the desired 3D car and synced the 360 plate with the filmed backplate. Once we’ve fine-tuned all of the 3D elements, we render! That’s it. Enjoy the outcome and convince yourself of the brilliance,” Arlart says.

“Without a VR camera, there isn’t much you can do. Rebuilding a dummy-version of the environment in 3D, creating custom lighting as best as you can, using a static HDR if possible. It could still look decent, but it would be a lot of work for little payoff.”

Arlart says that prior to this project, called “Road to Diversity,” his team tried similar approaches with multiple GoPros or other VR cameras, but they ran into issues with needing to do extensive fixing in post and the resolution wasn’t ideal.

While clearly designed as a testimonial for Insta360’s 8K Pro 2 camera, the idea and execution are still impressive and give a behind-the-scenes look at how the commercial car industry works. The finished video is so realistic that it might just make it difficult to believe any car commercial is actually real.