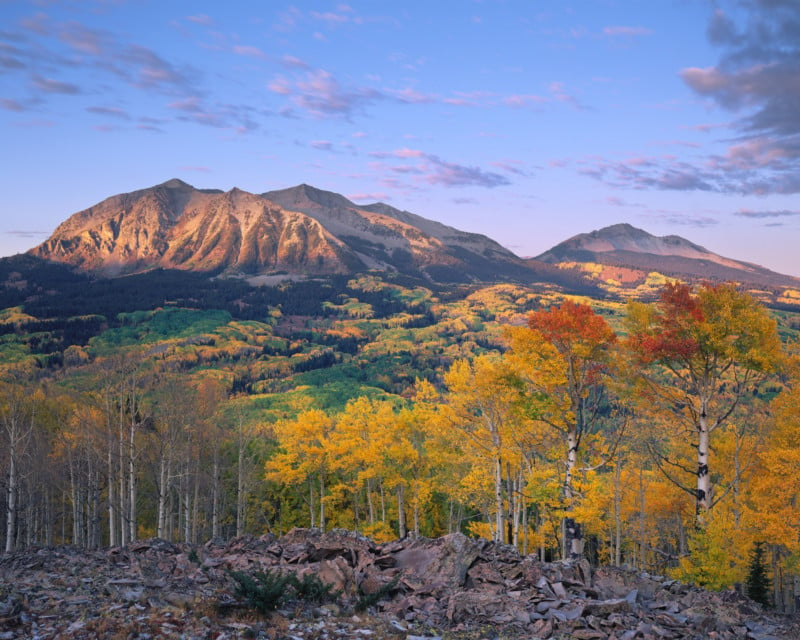 Autumn is something I never miss when it comes to photography. I may be working on other projects or other ideas, but when the leaves start to turn it’s hard to resist the urge to get out there and capture the vibrant colors.

This is the transition season when I shift from summer backpacking adventure to a month on the road in my van. It’s the last chance of the year to experience landscape photography without a heavy winter jacket so the warm afternoons, crisp mornings, and generally delightful weather are enjoyed as much as possible. After having all my film developed and the majority of it scanned in, it turned out this autumn was exceptionally productive, so it’s time to share the results.

As usual, I started off my autumn in the Colorado Rockies. It was off to a late start this year which made for an extended backpacking season above the treeline. No complaints from me! Timing the annual fall trip is always a challenge as peak color can vary up to two weeks from year to year. My typical method is to keep that time of year flexible with no rigid plans. A lot of loose goals are set, but the dates and locations need to stay open so that plans can be changed as the season progresses.

Colorado never ceases to amaze me. In some ways, it seems I know all the best spots to see aspen turn color, but in reality, I know that is far from the truth. Just beyond every ridge is another valley full of surprises so my typical plan is to revisit old locations but always set aside some time for finding new ones. An entire lifetime could be spent in this state without seeing it all as once you get past the roads, travel is on foot and there’s a lot of ground to cover. It’s also hard not to revisit favorite locations as there’s always new light and conditions to create images each autumn.

This autumn was generally light on clouds and the first dusting of snow was running even later than the changing of the leaves. Mixed skies of blue and clouds along with fresh snow on the peaks always make for my favorite grand scenic autumn images, but sometimes you have to take what you can get. What this year did have going for it was incredible color in the forest. Aspens did their normal change to gold, but this year was of a particularly brilliant hue and mixed with bright oranges and near reds. There’s always something to photograph in the autumn so this time I spent most of the season shooting without any sky in the frame; just intimate views of the aspen forest. Days were spent wandering around backroads as well as taking long hikes to see different patches of forest.

I’ve always felt that one of the best ways to bring the feeling of the aspen forest into a two-dimensional media is by making large panoramic prints that give you a view of just the trunks and perhaps some of the ground. There’s something about standing in front of a six-foot long print that takes you there into the moment. Leaving out the sky accomplishes two things: it removes the tricky part of the image that can’t be exposed deep within the forest and it creates a touch of mystery that lets the viewer fill in the scene with their imagination. It inspires you to think that it is just endless aspen forest no matter where you look.

The 4 x 5 film ends up being a great format for creating panoramas; with the massive amount of resolution available, a pano can simply be cropped out of the middle of the frame. Some people may prefer to use 6 x 12 cm or 6 x 17cm backs and use roll film, but I’ve found that using the whole sheet makes for the most flexible image afterwards. When it comes to printing, you never know if a customer might want a little extra height to fill a wall. There have been countless times when I was glad I had the whole sheet to work with. Even when making panoramas, it’s nice to have the rise and tilt available with a view camera to ensure proper perspective control over the aspen forest and maintain those perfect verticals.

Autumn in Colorado ended much more quickly than it came. A winter storm arrived with high winds and blew off most of the leaves while covering the peaks with snow. Part of the fun of fall is how fleeting it is. I took a few days at home to recover and resupply before heading out east for round two.

The lower elevations and warmer nights put the changing of the leaves quite a bit later in both the Great Lakes region and Appalachia. Out there you can find much more in the way of fiery oranges and bright reds in the foliage combined with the special look of a hardwood forest that you don’t find in the Rockies. The colors are deeper, the forest darker, the weather more often moody and wet. A completely new feeling fills my body and mind and changes the way I look for images.

Another difference in this region is that I’m no longer in my backyard so the landscape is unfamiliar. In some ways I’ve become quite relaxed about location research over the years as I have more time to travel than I used to. I get ideas for regions I’d like to see but often don’t find exact spots before I get there. The goal is to get my feet on the ground and feel it out for myself, which results in varying levels of success.

I travel many more miles each day than when I’m close to home and I take fewer images as I have to find them differently, but in the end I still enjoy the process and the attempt to stay away from the popular landscape icons. The forests of the east are a place where this method works particularly well. It’s not as though you need to have exact locations planned out to photograph intimate forest scenes and it’s hard to know where the best color would be ahead of time anyway.

From the Finger Lakes region of New York down through Pennsylvania and Virginia, I was repeatedly treated to moody weather that gave the forests an extra dimension. The mountains of Shenandoah were in the clouds almost all the time I was there, obscuring the distant ridges in varying thicknesses of fog and pulling me into close-up views of the chaotic forest. It’s a challenge making images that pull a viewer in, given such messy forests, but as photographers we have to organize the scene and make some sense of it. I try to find a grab: a lone tree of color in a monotone forest or an opening that makes you want to walk into the image.

Overall, I’m very pleased with the image that came out of my two long autumn trips. A full month of wandering and about 5,000 miles on the road resulted in 150 exposed sheets of 4 x 5 film. I hope you have enjoyed this selection of my favorites.

About the author: Alex Burke is a large format film photographer from Greeley, Colorado. Specializing in landscapes of open prairies and remote wilderness regions, he works with sheet film to capture images with endless detail and a unique color palette. Alex also aims to educate new and experienced film photographers through his blog and ebooks.