Director of photography Miguel de Olaso, Macgregor and architectural photographer Art Sanchez have been working on a new technique called the “Quicklapse” that allows them to achieve 8K video with cameras such as the Nikon D800, which is normally limited to 1080p. The trick involves capturing 36.3MP still photos in burst mode and then using interpolation in post to turn the images into real-time footage.

The video above shows an example of what a Quicklapse video looks like (it’s at a much lower resolution for web viewing, but the original data was shot at 8K).


The duo, which offers their services as Sanchez&Olaso, spent two weeks scouting out the best lighting and locations for the Son Brull hotel in Spain. Most of the shots were then captured in “8K 12bit RAW” using Hasselblad and Nikon lenses.

Macgregor first began dabbling with this technique back in 2012 on a trip to Iceland, during which his cinema camera got damaged and left him with only a Nikon D800. Instead of capturing 1080p video, he decided to shoot JPEG frames with a 5 shot per second burst mode of up to 100 photos. This meant each sequence could be up to 20 seconds long.

Afterward, the duo began testing multiple cameras to see which one would hold up best for shooting quicklapses. Of the many cameras they tested (e.g. Canon 1DC, Canon 5D mark III, Nikon D4, Sony A7, A7R, a99, a6000), the Nikon D800 still emerged as the best candidate. 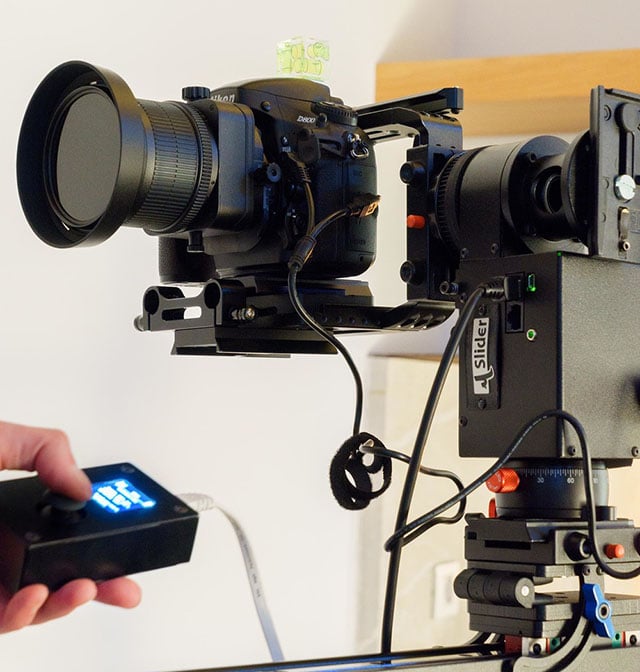 For this latest project with the Son Brull hotel, the duo shot more than 50,000 RAW stills at 36MP over the course of 2 weeks. It took their computer another two full weeks at 24 hours a day just to export the color corrected images as 4K frames with Lightroom.

These frames were then imported into Adobe After Effects, where they did stabilization, perspective control, and time remapping (which automatically adds in between frames to give the appearance of smoother real-time video). That process took yet another two weeks. Sanchez&Olaso says that quicklapses are great for instances where you’d like to capture 8K footage with photographic quality without having to use an extremely expensive piece of equipment. Downsides are that motion in a scene can ruin shots, and of course the ridiculously tedious and time-consuming work that needs to go into converting the giant pile of photos into a video.

P.S. If you’d like to see the original video at the top in the 4K resolution it was delivered in, you can download the file over on Vimeo.