Last Friday, we shared a video that compared the burst mode shutter speeds and sounds of various Canon DSLRs, and lest Nikon fans think we’re biased towards one brand or another, here’s a similar video by YouTube user bauercti that does the same thing for several of the camera’s in Nikon’s lineup.

By the looks of it, bauercti is a sports photographer who shoots mainly golf. As such, a quick camera that can capture every aspect of Tiger Woods’ or Adam Scott’s swing would make a great addition to the ol’ camera bag. In the video, burst mode speeds (at full resolution) are shown for the D700, D3X, D300S, D7000, D800 and D4.

Between those six cameras, continuous speeds range from 4fps for the super-high resolution D800, to a “machine gun” 10 fps for the much more expensive D4. 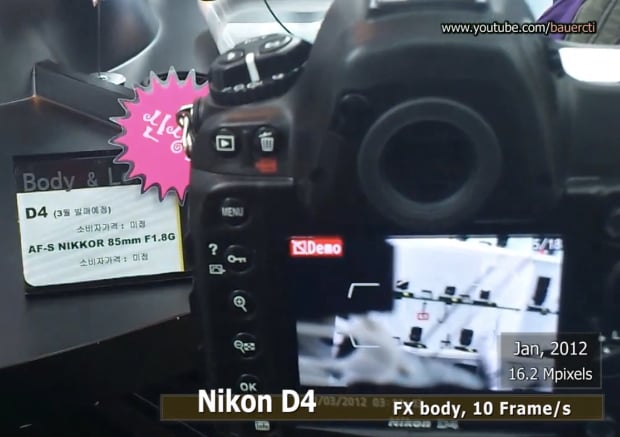 It’s worth noting that the D4 can actually go way above and beyond 10fps, it would just require you to drop the resolution … in some cases significantly. If you’re willing to shoot at 2.5-megapixels in live view, you can push that baby to 24fps, at which point you might as well just say “to heck with it” and record video.

Also, while Canon’s 1D X may be able to shoot at a mind-bending 14fps, that limits you to JPEG files. RAW ability maxes out at 12fps, and even then you can only shoot 38 RAW files max before the camera needs to buffer. In comparison, the D4 can keep 10fps going (with full AF and AE performance) for almost 100 RAW shots (according to Nikon).

In other words, if high-speed continuous shooting is your game, then Nikon’s slightly slower D4 may still beat out the 1D X when you consider all the facts. On the other hand, you could always just click play, listen to the cool shutter sounds, and not weigh in on the Nikon vs Canon debate at all … yeah, we’re gonna go with that.