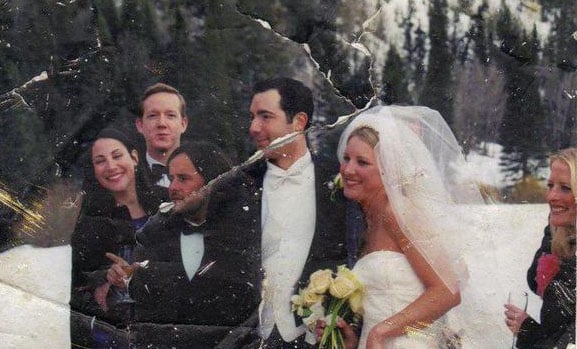 For the past thirteen years, Elizabeth Keefe has sought to find the mystery couple in a wedding photograph she happened upon.

The photograph, which depicts a smiling bride and groom with four of their wedding guests, was given to Keefe by a friend who had found it at Ground Zero weeks after the 9/11 attack.

Every year since 2001, Keefe has been searching far and wide to find someone who might happen to know one of the people in the photograph. And while the number thirteen isn’t exactly known for its luck, the thirteenth anniversary of 9/11 proved to be the one that finally brought her to the photo’s owner.

When the anniversary date came around again this year, she Tweeted the same message she always does on Twitter:

This year, however, she received a response Tweet from a man named Jason:

Much to her surprise, Keefe soon learned that all six of the people in the photograph were alive and healthy. One of the men pictured in the photograph (the man on the left) was Fred Mahe. He’s also the person who had lost the photo on 9/11/2001.

@ProfKeefe I KNOW THE PEOPLE IN THE PICTURE! I was at the wedding.

Dear Everyone: introducing the very much alive & well @FredWMahe!! #FARLEFT #weallknowyou #911photo #AMAZING #NYC Thank you to ALL

It turns out Fred Mahe is a Colorado resident who had been working in the World Trade Center in 2001 but hadn’t arrived at the office yet at the time of the attacks. The photo, which was taken at a friend’s wedding in Aspen, Colorado in 2001, had been lost in the rubble when the towers collapsed.

He tells Boston magazine that, “The picture was at my desk in the World Trade Center, Tower Two, on the 77th floor. The picture has been kept safe by [Keefe] for the last 13 years […] She kept my photo safe for 13 years in her favorite Ernest Hemingway book, A Moveable Feast.”

What if Sports Cameramen Were Allowed to Get as Close to the Action as They Wanted?

Leaked Photos and Specs of the Samsung NX1 Mirrorless Camera