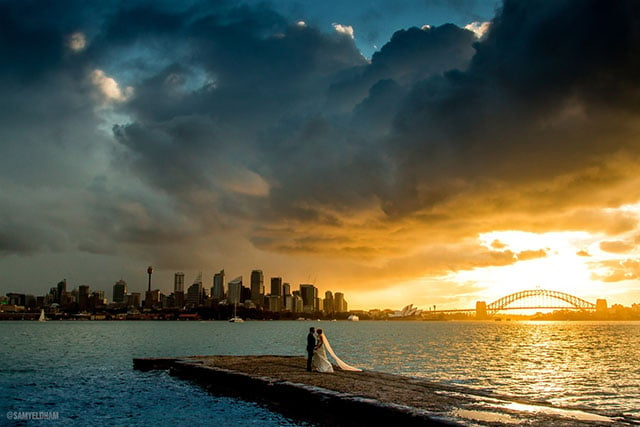 One of the big photo stories on the Web this past week has been the picture above, shot over the weekend by Australian photographer Sam Yeldham. Yeldham was shooting time-lapse photos of a storm rolling into Sydney when a bride and groom strolled into the scene. He captured a gorgeous shot of the couple as the sun was setting and before the storm struck, but the couple was gone before he could get their contact information.


Yeldham then posted the photo to his Instagram account, calling it his “first wedding photograph.” “Sometimes you are lucky enough to be there for a moment,” he wrote.

Sometimes you are lucky enough to be there for a moment || sometimes the moment have actually organised to be there and you just need to find out the time they are meeting.. My first wedding photograph – taken yesterday during the coming of a #Sydney storm from #bradleyshead at #sunset whilst shooting #timelapse

The photo soon went viral, receiving over 1,900 likes and a great deal of press from around the world. All the attention helped bring photographer and unknown subjects together.

Yeldham was contacted on Tuesday by the newlyweds, Jess and Chris, who were on their honeymoon in Hawaii. The couple tells BuzzFeed that it was sunny at their church ceremony but raining as they drove to Bradley’s Head on the north shore of Sydney Harbour.

“When we arrived we didn’t think we’d get any good shots,” they said, “but then for 15-20 seconds there was this amazing light! We were so lucky!”

It turns out the official wedding photographer, Liv of Liv Style Photography, managed to capture some incredible shots as well. Here are the ones she shared on her Instagram account:

You can find more of Liv’s photos from the wedding in this Facebook album.

Yeldham posted an update yesterday of another photo he shot to tell his followers that the couple has been found:

Thanks to the internet my #Sydney Wedding snap traveled around the world to reach the very lovely newlyweds on their honeymoon! Thank you to everyone who shared or commented on the original #sunset photo, and to the happy couple for being totally cool with their wedding being plastered all over the internet. The lie is that the day ends. :)

P.S. Art world instigator Jonathan Jones of The Guardian has some harsh thoughts on why people are drawn to Yeldham’s photo.