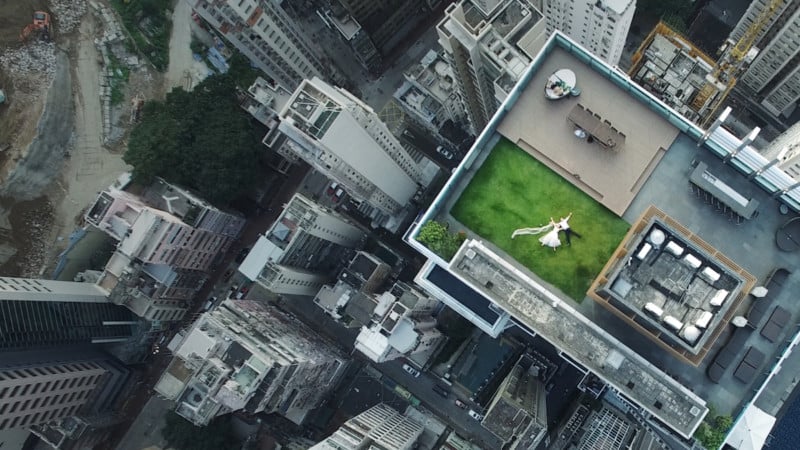 This beautiful still frame, captured by travel filmmaker Brandon Li in Hong Kong during a drone test, is a complete accident. And as accidental photos go, it falls somewhere between spectacular and “holy crap that’s cool.”

“A friend and I were testing out a DJI Phantom 3 in the Wan Chai/Causeway bay area of Hong Kong, mostly trying to catch the sunset,” Brandon tells PetaPixel. “But the battery was almost dead so we pointed the camera down to catch another angle and let the drone return to home.”

Funny enough, they didn’t even see the couple as they were shooting. It wasn’t until Brandon was reviewing the footage later that he noticed the perfectly arranged couple, lying face up on the roof lawn. Here’s a closer crop, posted to Instagram:

“[I have] no idea who they are, but I assume they were practicing a pose for a wedding photograph or something,” he tells us. “Or maybe they were just making lawn angels.”

It’s too great of a shot to waste, so Brandon did some color correcting to make the couple pop, cloned out “what appeared to be either some extra clothes or another person standing near their feet” and published the photo on Facebook in the hopes that he can find the mystery couple and give them this beautiful image.

So, do you know who this is? According to Brandon’s friend Doug Hac of the One Bag Company, this is the J Residence hotel in Hong Kong. If you know who this couple is, or have a way to track them down, drop Brandon a line in the comments or find him online on his website, Facebook, Instagram, and Twitter.

Image credits: Photograph by Brandon Li and used with permission.

Even Obama is Sometimes Asked to Help Snap Group Photos