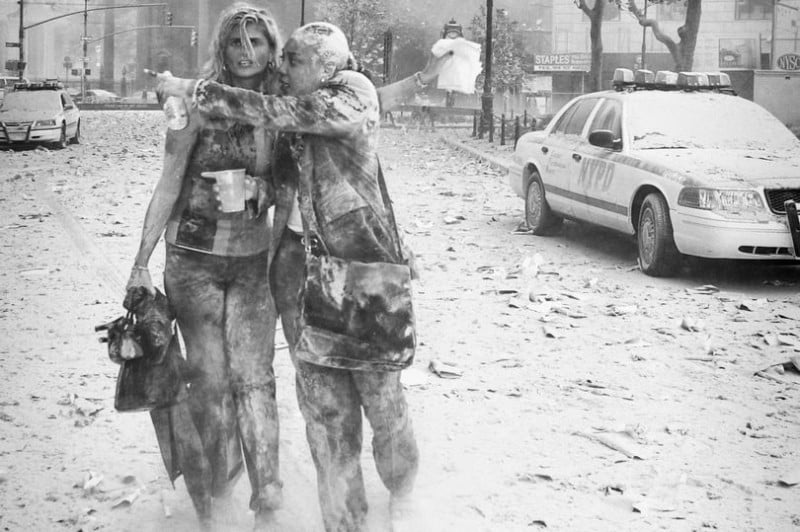 After the terrorist attacks on the World Trade Center on September 11th, 2001, a dust-covered Joanne Capestro was photographed by street photographer Phil Penman as she stumbled away from Ground Zero. Fast forward 17 years, and Capestro recently had Penman photograph her again — this time for her wedding.

Capestro had been working as an assistant secretary on the 87th floor of the North Tower when the hijacked American Airlines Flight 11 crashed into the skyscraper five or six floors above her. She then ran down 87 flights of stairs in 22 minutes and had barely stepped outside before the tower began to collapse.

And as she walked away from the dust-covered blocks surrounding Ground Zero, Penman noticed her and captured his now-famous photo.

The Daily Mirror reports that Capestro and Penman were reunited three years ago after the photographers 9/11 photos were shown at the National September 11 Memorial & Museum. A museum staff member recognized Capestro in the photo and helped connect her with the photographer.

When Capestro married her fiancé Robert Vasquez last month, she asked Penman to be her wedding photographer.

Penman is a Leica photographer and Leica Fotografie International winner who’s based in New York City. You can find more of his work on his website and Instagram.

(via Mirror via Fstoppers)

Image credits: Photographs by Phil Penman and used with permission

iPhone XS vs. iPhone X : A Look at the Camera Hardware Changes