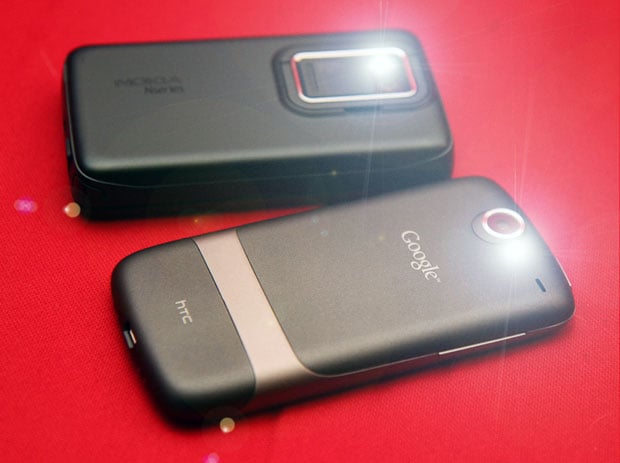 Mobile photo sharing has become one of the big photography trends over the past couple of years, and smartphone makers are now working hard to win the affections of smartphoneographer by developing better cameras and sleeker features. Two of the big players in the game, HTC and Nokia, are both generating some buzz this week through reports that they have some big photo-related plans in store for their upcoming phones.

The two (proprietary) technologies that are making headlines are: HTC’s “Ultrapixels” and Nokia’s “PureView.”


On the HTC side of things, Pocket-lint is reporting that HTC will be introducing a new camera sensor in its upcoming M7 smartphone — a sensor that will feature what the company is calling “Ultrapixels.”

The rumored 13-megapixel sensor won’t capture 13-megapixel photos. Instead, it will comprise 3 sensor layers that are each 4.3-megapixels, with the resulting data combined into a single sub-13MP photo.

Does that description remind you of anything? Yup: that sounds exactly like how Sigma’s Foveon X3 sensors work. The sensors are designed to capture more color information than traditional sensors, leading to cleaner photos and better color reproduction.

The idea of using more megapixel than you need to create a higher-quality photo (with smaller dimensions) sounds like what does with the PureView 808 smartphone, but Nokia uses a single sensor layer and combines every 7 pixels into 1 in order to improve image quality.

In a new “Brief History of Photography” infographic published on its blog, HTC disses Nokia’s PureView directly, citing one reviewer who concluded that the 41-megapixels “won’t help you at all”: 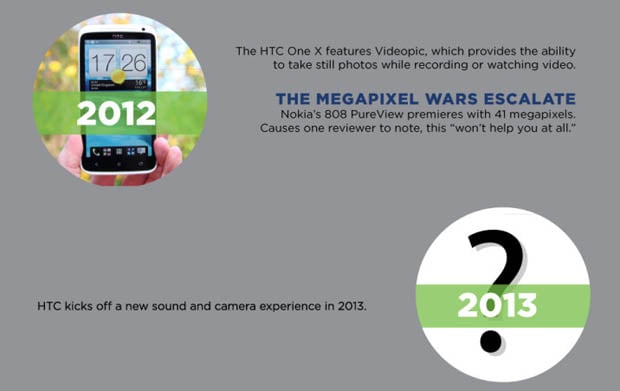 We’ll likely hear much more about “Ultrapixels” on February 19th, on which HTC will reportedly be launching the M7 and unveiling the technology.

On the Nokia side of things, The Guardian is now confirming that the same mega-megapixel tech that’s found in the 808 PureView will be introduced in upcoming Lumia smartphones. This is something that we first reported back in mid-2012.

When the Nokia Lumia 920 was unveiled in September 2012, it carried the same PureView tag but lacked the same beastly camera as the 808 PureView. Although the 920 proved to be fantastic in low-light situations, many people were left wondering whether the 808’s impressive image quality would appear in the Lumia line. The answer is “yes”.

It will reportedly be introduced in a Nokia Lumia EOS (Canon is cringing right now) smartphone that is set to arrive sometime this summer.

Image credit: Photo illustration based on Google Nexus One vs Nokia N900 (4 of 6) by markguim, HTC ChaCha Camera by abulhussain, Nokia 808 PureView by John.Karakatsanis

Exhibition Uses a Computer to Generate Every Possible Photograph