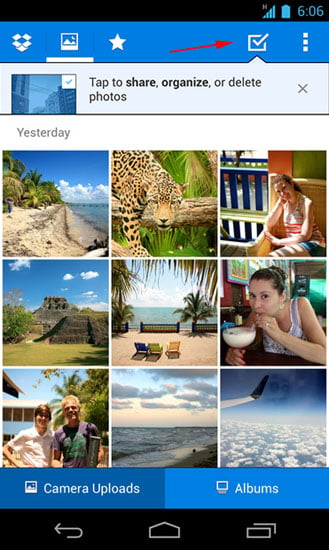 Dropbox has been making major moves toward being a series photo-sharing service as of late, and its latest Android app update moves the service one step closer in that direction. The new feature allows users to quickly and easily share entire collections of photographs with friends and family.

After selecting the images you’d like to share from the Photos tab, simply tap the button in the upper right to grab a public share link that you can send out. The recipients won’t need a Dropbox account to view all the photographs. To get started, simply grab the latest update from the Google Play Store.

Last week we reported that Dropbox has partnered with Samsung to offer 2 years of free 50GB storage for Samsung camera purchasers. The news comes just weeks after it was announced that the service had acquired Snapjoy, a major player in the cloud photo sharing space.

You can follow along with our coverage of Dropbox’s transformation here.

(via Dropbox via Engadget)

The End of an Era: Steve McCurry and the Final Roll of Kodachrome Film