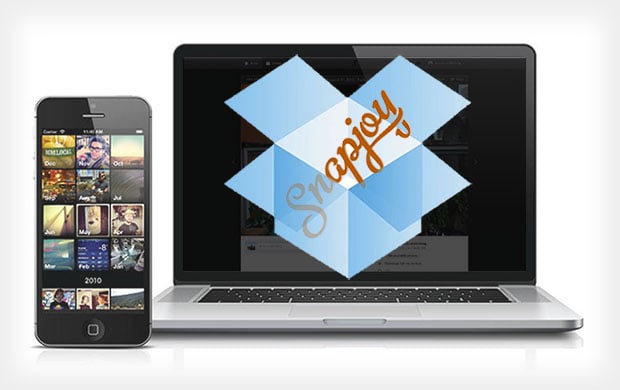 In the world of cloud data storage, Dropbox is one of the 800lb gorillas fighting for your files. In recent days, it has been making big moves to become more of a player in photo storage and sharing. After all, everyone needs a safe place to keep their digital images, right?

The company’s latest play came today in the form of an acquisition: Dropbox has acquired fellow cloud-storage company Snapjoy — a business based around aggregating photos from around the web and from your various devices. This news comes less than a week after Dropbox launched a big update to its mobile apps that introduces a new Photos tab. The feature offers a front-end viewing experience for enjoying the images you have stored in Dropbox’s cloud.

In a blog post announcing the acquisition, Snapjoy founders Michael Dwan and JP Ren write that the service will continue to exist for the near future… at least for existing customers:

By combining forces with [Dropbox’s] amazing team, we can leverage the technology and scale of their platform and focus on what matters — delivering an incredible photo experience to over 100 million people.

So what happens next? First and foremost, don’t worry — your photos are safe! Though we won’t be accepting new signups, existing users can continue to use Snapjoy to share and enjoy photos just as you do now.

The terms of the deal (including the price) have not been disclosed, but TechCrunch reports that, according to Dwan, it was “A furlong of sunshine or a bucket of rainbows, whichever is less.” They also write that Snapjoy decided to sell in order to take advantage of Dropbox’s massive customer base and its scale.

As we’ve been saying quite often as of late, cloud-based photo storage and sharing appears to be one of the hot areas in the business world right now. It seems like every company is struggling to snatch a piece of the pie. Recent launches in this space have come from companies such as Canon, MyShoebox, Eye-Fi, and Facebook.

More and more of these cloud storage services have begun adding easy-to-use front end interfaces for sharing and enjoy photographs, bringing them into direct competition with existing photo sharing services (e.g. Flickr and 500px) that emphasize quality over quantity.