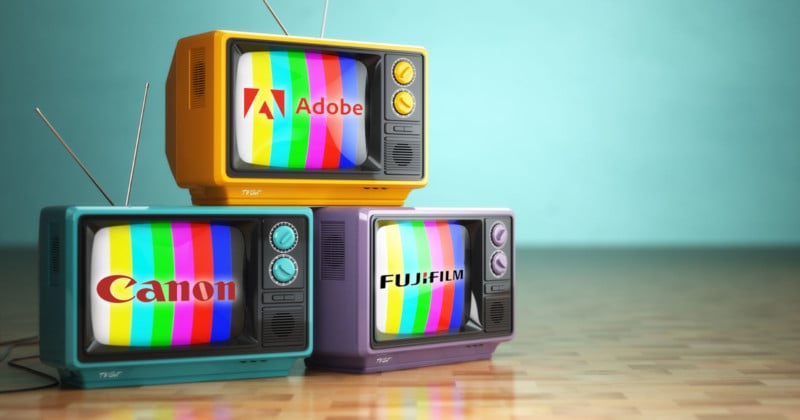 Seeing television ads for cameras and camera products is not nearly as common as it used to be, but that is starting to change as companies realize they need more general consumer support to survive at a time when the market is shrinking.

Canon is about to make a return to television advertising for the first time in nine years as it attempts to boost widespread product awareness of its printers, scanners, and webcam software.

Outlined in a report from Digiday, the company says that its goals for returning to broadcast television is to increase customer awareness of its brand beyond just cameras.

Canon’s overall spend on U.S.-based advertising rose to $6.6 million from 2021’s $5.2 million spend, but it’s still not a lot considering the overall TV ad spend in the U.S. hit a peak of $68.35 billion, despite the growth and popularity of streaming services. Digiday says that Canon’s spend has been spread across social media, influencer marketing, and digital video ads, but that is poised to change. That strategy so far isn’t uncommon — it exploded in popularity in recent years due to the success that rival Sony has seen — but it might not be enough.

“We haven’t been as out there, potentially as in the past,” Canon’s director of marketing and service, Kevin Price, tells Digiday, referring to advertising on broadcast television. “We want customers increasingly to be aware of the types of products and solutions we offer.”

Canon launched a new campaign called “Harmony at Work” in September, which features elements of work-from-home and looks perfect for use on broadcast TV. The ads feature actor and comedian Brett Gelman, perhaps best known for his role as Murray Bauman in Netflix’s Stranger Things.

Canon, which is traditionally known as a camera company, is likely trying to diversify its image because its full product suite has allowed it to continue to succeed despite the low-end of the camera market completely evaporating due to the rise of the smartphone. From a strategic standpoint, it makes a lot of sense to grow those other segments in order to make up for it.

It’s probably a smart move. Adobe, for example, recently started advertising Creative Cloud Express on broadcast television through a series of ads, likely to grab the eyes of users who are familiar with the brand but aren’t subscribers due to a sense that the company’s software is either too difficult to use or too expensive.

Targeting enthusiasts who frequent YouTube channels about photography or photo editing and publications in the photography trade space won’t be enough to allow Adobe to properly compete with growing powerhouses like Canva or Picsart.

Canon and Adobe’s strategies are both in contrast to Fujifilm’s. The camera company has been producing video advertisements for the last couple of years that are very much targeted at camera enthusiasts specifically but have limited reach to just the company’s YouTube channel. Just this past week, it published a humorous video ad that is designed to assure its fans that still photography is very much a focus for the company (no pun intended).

Many of these videos, while well-produced, don’t have very many views. As competition to grab the attention of the shrinking number of camera “power users” or enthusiasts continues, how companies choose to position their products and marketing is a good way to discern, at least in part, where the business will put its efforts. Whether any of these ads actually work remains to be seen, but what is clear is who these companies hope is paying attention.