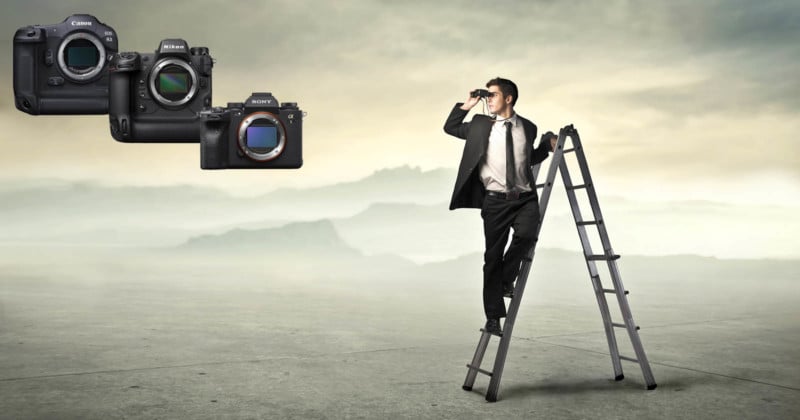 The news of falling camera shipments is like the dripping of a faucet. It comes with a regular, steady, beat, and just when you think it has stopped… plink, there it goes again! So perhaps it’s no surprise that CIPA — the trade body for manufacturers — has a downbeat forecast for 2022, but strangely seems to have missed the good news!


For those that aren’t familiar with the digital boom-and-bust of the camera industry, the graph below shows the number of units (dashed) and their value (solid) for cameras (red) and lenses (blue). 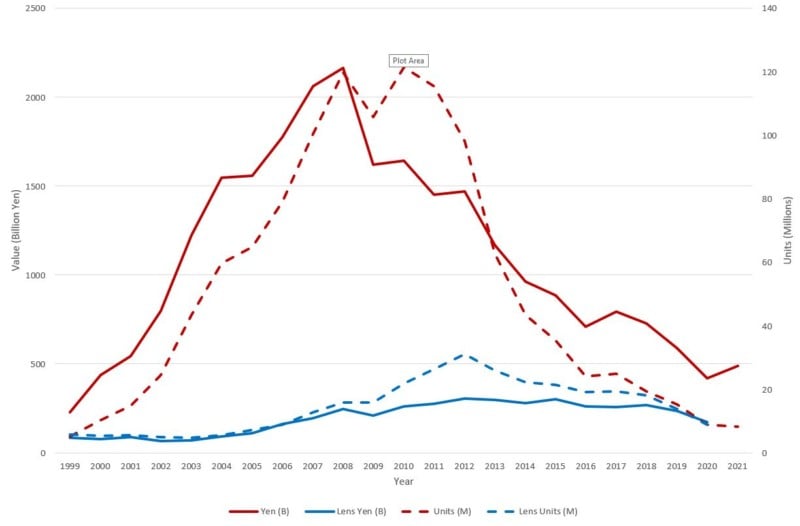 Units and value tend to track each other and simply reflect unit prices; ultimately value is the most important because… well, that’s income for the industry! Lenses have generally been more stable but that is simply because they reflect DSLR (and latterly mirrorless) shipments.

Until 2020, the integrated camera was the single biggest segment, making up 92% of the 121 million units shipped in 2010. And since then, it’s been downhill all the way for what has been a roller coaster of a ride for the industry. That implosion has been driven — unsurprisingly — by the smartphone which basically overtaken integrated lens camera sales. Nikon has all but pulled out of that market, while Canon is shutting camera manufacturing operations in China.

The industry finds itself back to making interchangeable lens cameras (ILCs) for a relatively small, but stalwart, market. The cash cow that was integrated cameras is no more, however, what has made the impact of this decline more severe has been the pivot to mirrorless (this is at least the case for Nikon, Canon, and Pentax) combined with COVID-19.

It’s no surprise that 2021 saw a contraction of camera shipments, coming in at 8.3 million units, down from 8.9 million units last year. It’s worth stating that this collapsed from a pre-COVID 15.2 million in 2019.

In its February press release, CIPA looks ahead at the coming year to prognosticate on the state of the industry. It highlights a 5.9% drop in shipments from 2020 to 2021 which was entirely attributable to integrated cameras which actually dropped 15.8% as a category. CIPA also lumps DSLRs and MILCs together as ILCs, and together notes growth was flat, which doesn’t seem to be a ringing endorsement.

That said, CIPA believes the semiconductor shortage has affected the ability of the industry to ship products and that demand is actually there, a sentiment that echoes independent investigation by PetaPixel as well. The good news is that the shipment of lenses actually increased by 5.8% to 9.55 million units, making for a 1.6 times multiplier for the number of ILCs shipped.

The headline outlook is a 6.1% drop in total shipments to 7.85 million, with a 15% drop in integrated cameras (to 2.5 million) and a 1.1% drop in ILCs (to 5.3 million). That’s a pretty depressing report and the only good news CIPA seems to rustle up is that while the sales of lenses will drop slightly, it will be less than the proportion of ILCs (meaning the multiplier will increase slightly).

What Has CIPA Missed?

Canon is far more bullish about prospects for 2022. In its annual report, the company estimated the ILC market for 2021 at 5.27 million units, close to CIPA’s 5.35 million. But in stark contrast to CIPA, Canon believes that this will actually increase to 5.65 million. I’d have to agree as the underlying data is a little more nuanced.

Somewhat counterintuitively, CIPA decided to amalgamate the data (which they record separately) for DSLRs and MILCs, and when you do this the picture is more interesting. Specifically, while DSLR shipments dropped last year (to 2.24 million), it was only by 140,000. In contrast, MILCs actually increased shipments by 180,000.

Canon’s outlook is for that successful MILC market to continue to expand while the inexorable demise of the DSLR abates, at least for the time being. Canon’s best guess is that while the overall market will decline (because of contraction in the integrated camera market), ILCs — and specifically MILCs — will expand. One could argue this is particularly problematic for Nikon, which appears to have largely pulled out of DSLR production and could leave Canon and Pentax to mop up remaining sales.

Maybe CIPA is just hedging its bets, but the market appears to be expanding — a result of pent-up demand, factory closures, chip shortages, and a surplus of cash — not contracting.

Bear in mind that the pre-COVID 2019 shipment data showed 8.46 million units were shifted and the expectation is that if 2022 doesn’t match that level, then we should at least be approaching it. The release of new mirrorless models from 2019 onwards also plays to this understanding and manufacturers’ expectations may well be that they begin to reap the sales rewards of consumers replacing their aging DSLR systems. Sure, not everyone will but there should be some boom effect.

It’s also worth noting that CIPA’s positive outlook around the lens multiplier effect (1.8 times for 2022) is bogus. Yes, the multiplier has always been there but in actual fact, it has been decreasing year on year. In 2017 it was 2.1, while in 2014 it was 3.1; that’s a big drop and, for manufacturers, a worrying trend as it suggests that those customers that remain are buying fewer lenses than they used to.

That is unlikely to be the case at all. What is likely more true is that consumers are buying fewer lenses from CIPA member manufacturers which excludes, for example, Chinese and Korean brands. It’s quite possible that the multiplier is significantly higher but that sales are being cannibalized from third-party sellers, taking valuable revenue from system manufacturers.

Overall, the outlook for 2022 is positive, despite CIPA’s doom-and-gloom headline. The key question is: who can take advantage of it?

Image credits: Header illustration based on photo licensed from Depositphotos