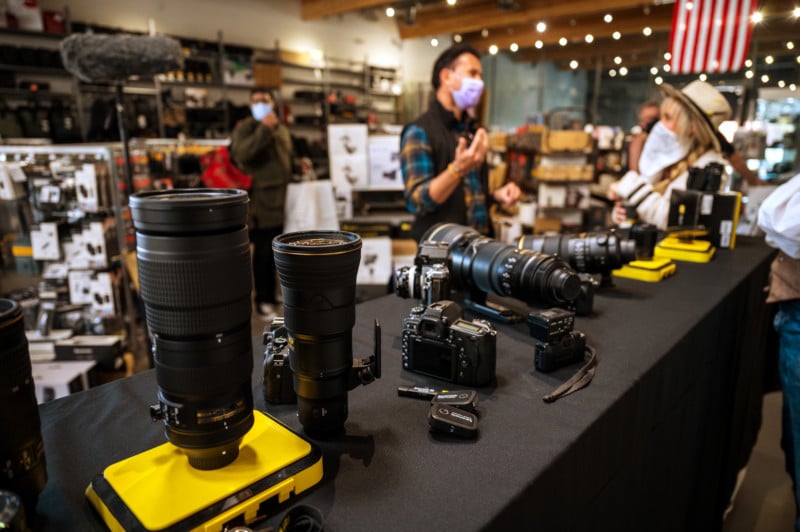 The camera industry suffered a massive blow at the onset of the COVID-19 pandemic, but began to recover just in time for the global supply chain to collapse. Very few want to openly discuss this problem, but the industry is currently in a tough spot.

This fact has likely been obvious to those who have been paying attention for through most of 2021: products just are not hitting store shelves. What started with a low availability of the Nikon Z7 II and the Fujifilm GFX100S in the early months of the year has expanded to basically every new camera or lens made by any manufacturer. While camera and lens makers have acted as though nothing has changed by regularly announcing new products, those launches are nearly immediately followed by notices of short supply, “unexpected” demand, or delays.

Major manufacturers across any industry that needs microchips to power devices clearly know there is a problem even if they choose not to admit it. Apple, Audi, and Sony have recently either announced or are rumored to be in the midst of major product shortages or delays due to the lack of chip availability. Fujifilm informed PetaPixel that it was delaying the XF23mm f/1.4 R LM WR lens, which was originally planned to be available in November, to February of next year. Fujifilm’s GFX 100S, Canon’s R5, Sony’s Alpha 1, and countless new lenses all announced this year are on backorder, with no real expectation of arrival available.

Some new cameras seem to be immune to the problem. The Sony ZV-E10, for example, is widely available, but experts with whom PetaPixel spoke speculate this is because the camera reuses parts from older devices, making it much easier to manufacture and distribute. Sony declined to comment.

To make matters worse, while most companies have been quietly releasing short product advisories about production issues, none will speak openly about the problem. PetaPixel reached out to nearly every major manufacturer to discuss the topic and all declined. Even major nationwide dealers are quiet, and none agreed to speak on the record about the pervasive issue of low stock. The industry’s major players are aware of the problem, but all seem content to pretend it does not exist, all acting as if there is no war in Ba Sing Se. 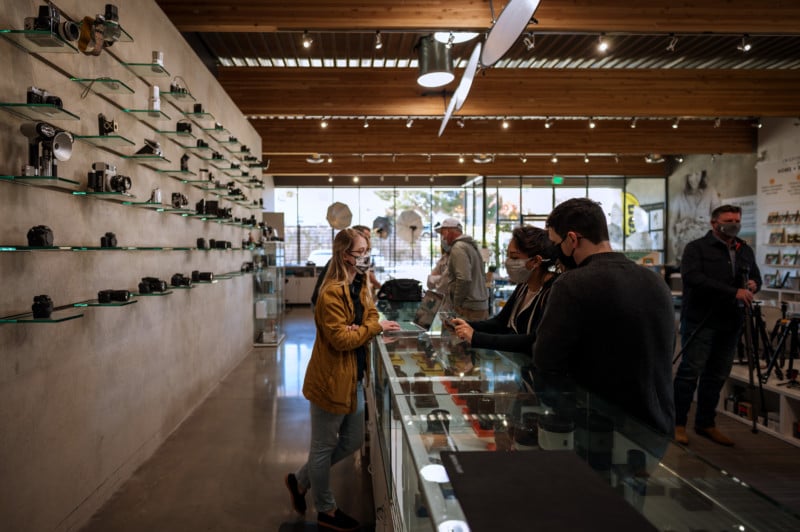 Luckily, not everyone feels the need to stay silent on the issue. MacKenzie Hughes, general manager at Forth Worth Camera in Fort Worth, Texas, was willing to speak to PetaPixel frankly about the issue. In short, he confirms what everyone already seems to know: products are extremely difficult to acquire right now.

Hughes is a member of multiple organizations that small businesses like his are a part. For example, he’s a member of the Photographic Research Organization (PRO) which is a membership group made up of smaller shops like Fort Worth Camera. He describes them as basically co-ops where the members can band together to bargain for better deals with vendors. It’s why he knows the situation he’s dealing with isn’t limited to just his shop.

By erratic, Hughes explains that sometimes products will arrive in large amounts suddenly and all at once, but then availability will soon after dry up and disappear for weeks or months at a time.

“We’ll have an onslaught of Tamron and then we won’t. There will be nothing from Canon, then there is a bunch from Canon. It kind of comes and goes where every brand is having a different time. It’s not all at once from every brand. Every now and then we get a shipment but it’s not consistent,” he explains.

Hughes says that he and his staff know that everything is not fine in the industry and are doing their best to communicate that to customers.

“Everything is not fine, it’s why you have to react a little quicker. That has been our mantra.” 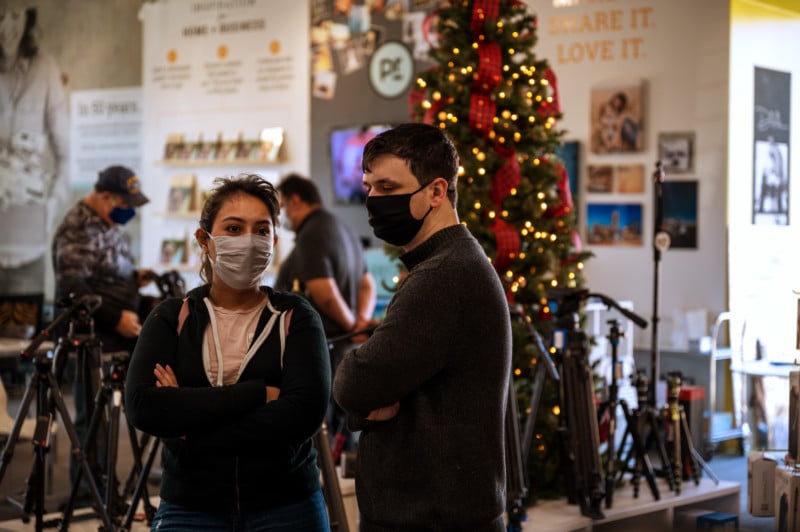 Demand is higher than he’s seen in years, but there simply are no products to sell. This puts the camera industry in a tough position, as for the first time in years customers are dying to spend money in an industry that has done nothing but shrink up to this point over the last decade, but companies can’t take advantage of the situation. The industry is still trapped, but this time for an entirely different and even more frustrating reason.

“The demand is really supercharged right now,” Hughes says. “The demand is much higher because people know that there is a shortage. I was on a conference call with colleagues in the printing industry and it’s the same thing. One way or another, something is going to be held up. In the case of printing, it’s hard goods because of shipping problems, photo developing chemicals, or just shipping paper.”

In an interesting turn, Hughes says that the scarcity of items has not only supercharged demand, but it has also provided what he describes as a “mini-renaissance” for smaller regional camera stores like his.

It might seem like something you would hear out of a used car salesman trying to get a quick sale, but the emphasis on buying something if it is seen on a store shelf is actually good advice right now across all of consumer technology. Basically, if someone was hoping to snag a great deal on highly-coveted tech products this winter, it’s time for a harsh reality check: it’s not likely to happen.

“People are spending more money and more aggressively because they know they can’t get it,” Hughes says. 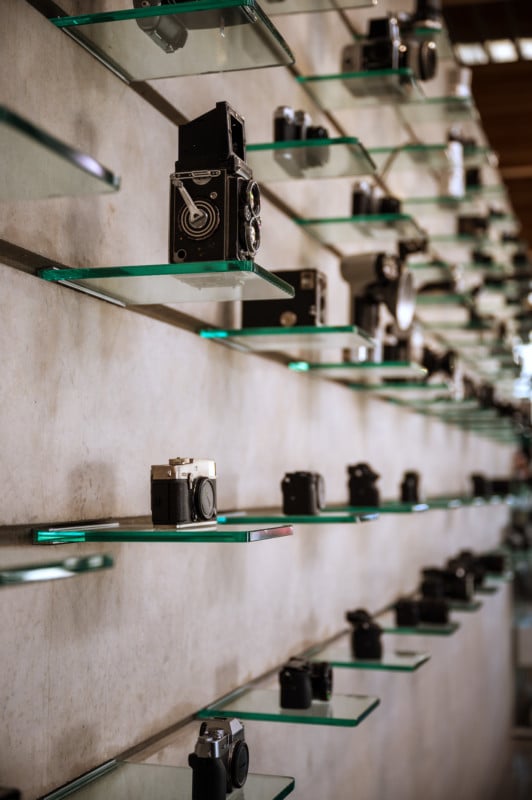 “I haven’t seen people clamoring for digital cameras since they came on the scene. Digital cameras were the rage back then, and now we’re having people pre-pay for cameras that don’t exist yet,” he says. “For example, people were throwing down $3000 for the R3, a camera they didn’t know how much it was gonna cost. Now it’s happening with the Z9. I had someone pre-pay for 10 of them yesterday.”

Hughes says that the situation has worked to his advantage over larger online retailers. Since customers don’t get the advantage of quick shipments and ease of online shopping, the competitive advantage of the brick-and-mortar store has come back around.

“If you can’t get it at [a national retailer] why not get it from us?” Hughes says. “We haven’t been shy about saying that the other guys don’t have it either. There is an advantage to shopping here. Forget that you can get your hands on it because you can’t, but you can talk to a real person which you can’t do at those other places. But we’re here, and it’s a pleasant experience.”

When asked why he thinks the situation is so bad and when he thought it might improve, Hughes wasn’t sure about the latter but explained that it isn’t just a chip shortage.

“I think it’s a little naive to blame it solely on the chip shortage when there are supply chain issues aside from that,” he says. “There are lots of lots of ships parked in harbors that can’t get unloaded.”

Until both the supply chain issues, as well as the chip shortage, are addressed, the situation is unlikely to improve. Forecasters have said that the shortage issue could last for another year at least, and some say that it’s worse — there is no end in sight.

“We’re having to evolve our sales strategy, to basically have Black Friday right away and telling people, ‘Hey, let’s not fool each other. Start shopping now.‘”

Image credits: Photos of Fort Worth Camera by Ted Forbes and used with permission.