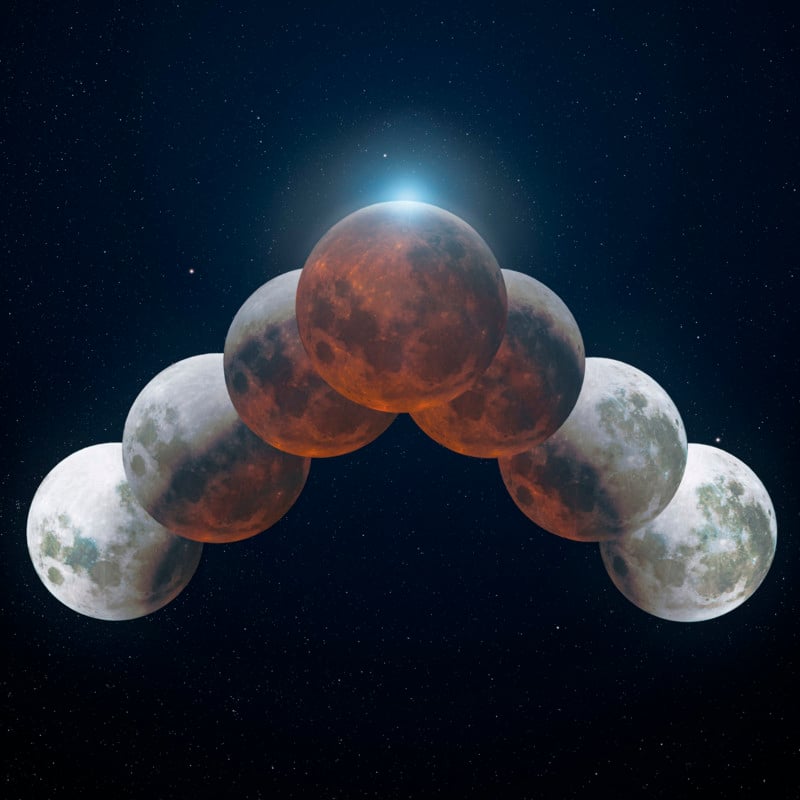 The longest partial lunar eclipse in 580 years occurred this week, and photographers around the world did their best to capture the once-in-a-lifetime event on camera. Photographer Andrew McCarthy went the extra mile by staying up until 4am and capturing thousands of photos to create an incredible composite of the eclipse.


“I planned this shot in May during the total lunar eclipse we had back then,” McCarthy tells PetaPixel. “Unfortunately, I was geographically limited so couldn’t see the eclipse in its entirety.

“For this image, due to the time of the eclipse starting and its position in the sky, I was able to capture the entire sequence from start to finish. That enabled me to get a detailed shot during every stage of the eclipse.”

Read also: How to Photograph a Total Lunar Eclipse

McCarthy prepared to capture the eclipse by setting up three cameras with three telescopes in his backyard in Florence, Arizona.

“At first I had a vision that each image would overlap just enough to create a round shadow showing the circular shape of Earth’s shadow,” the photographer says. “However, that has been done many times before and I wanted to try something unique.

“By positioning each image in these positions, I felt it gave the composition a greater sense of depth, and really helped illustrate what we are looking at, which is a shadowed sphere.”

After capturing a huge number of photos over the course of the eclipse, McCarthy combined thousands from various phases of the eclipse each into a high-definition photo of the Moon. The photos that went into each phase were a combination of images captured with the three different telescopes and using different exposure settings on the cameras (to capture as much detail as possible on both the shadowed and illuminated sides).

The final composite photo, titled An Evening in the Shadows, features 7 of the highly-detailed moon phases and has a massive full-size resolution of 356-megapixel.

Here are behind-the-scenes videos McCarthy captured throughout the event showing his setup and process:

The eclipse on November 19th was the longest partial lunar eclipse since the year 1440 and it will hold the crown until the year 2669.

If you’re interested in buying a print of McCarthy’s composite photo, you can do so over on McCarthy’s website. You can also follow along with his photography and receive great perks by signing up to be a patron through Patreon.