The Marine Corps’ latest ad is a masterclass in cinematography, advertising, and visual allegory. It is the result of Oscar-winning talent and keen insight by a sophisticated advertising agency. Such mastery of the cinematic language warrants a deeper look.

The client in this case is the Marine Corps. The crew includes Wally Pfsier, the cinematographer from Christopher Nolan’s Inception, and composer Hans Zimmer, who lends his signature combination of big brass and ethereal pipe organ. The task is to imagine what could be, in essence, fantasy; something Hollywood knows well. Yet, there are no actors here, all of the “characters” you see are in fact, real, active duty Marines.

Here, the fantasy takes on many forms. The opening scene is an imagined idea of the not too distant future. And, the ensuing depiction of the Corps is not so much who it is, but who it is becoming and who it wants to be, and that is a good thing. This is a Post- Global War on Terror Marine Corps, that has gone back to the basics, literally: basic training and earning the title at Parris Island, SC. The video begins with a scene akin to the world of Blade Runner 2049 or Spielberg’s A.I. Across the top right hand of the frame flash three words: Allure, Perfection, Luxurious. These are the values, it is suggested, that characterize today’s world. These words are surely meant to contrast sharply with the Marine Corps’ own three core values: Honor, Courage, Commitment.

The entire ad itself seeks to juxtapose two worlds, both incompatible with the other. The main character is confronting not only his avatar (the ego,) but also his identity and sense of worth (mis)informed by the digital version of himself. 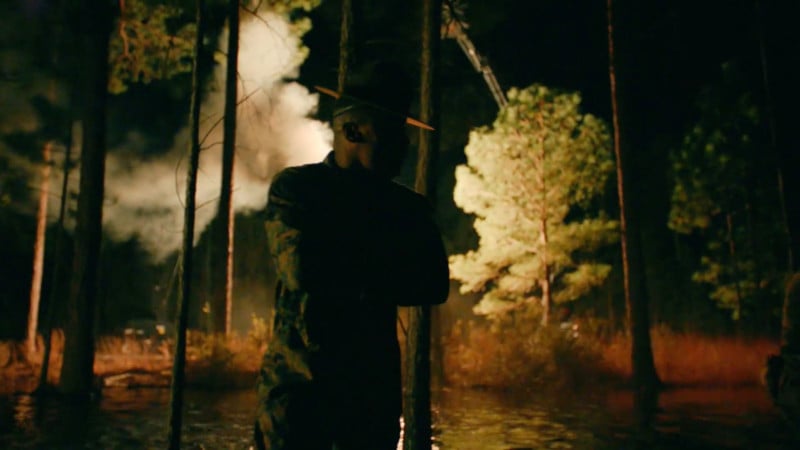 There is a sharp transition from a very cool, artificial color palate to a warm, more natural color palette (minus the mustard yellow glow of what is likely a 40mm illumination round.) This contrast of opposites quickly establishes the separation of the two worlds.

Filmmaking is often a question of what is in the frame, what is outside of it, what does the light reach, what do the shadows hide, etc. We see the eyes of the recruit, but the drill instructor’s (DI) face remains in shadow. DI’s are trained to not eat, drink, or sleep within eyesight recruits, they appear almost as superhuman like figures who collectively embody some version of a carefully scripted character. Time in the pool is an essential part of training for Marines whose duty could be on land, in air, or at sea. But visually, these three shots signify much more than that. Boot camp is meant to break down the individual, and build them back up. Here, we see our character sinking and reaching the bottom before bouncing back up. If you notice, the playback of his entrance into the pool is actually played in reverse (watch the ripples) – giving it a sort of surreal effect. And, in the western tradition, submersion in water and resurfacing conjures images of baptism and renewal, of rebirth. Initial cool tones of a dark and uncertain world give way to an emergence into warm, bright light. Throughout the piece, the subject is often backlit. Besides making for an epic shot complete with lens flares, this camera position silhouettes the subject, making them anonymous and encouraging the viewer to put themselves in place of the faceless figures.

In the above shot, there are a variety of focal lengths and film speeds. This is the sort of Chariots of Fire, running on the beach in slow motion moment. After a quick long lens shot, we’re placed in the action with some nice handheld camera work. This is the first unobscured look at a drill instructor, backlit no less. Stoic and dispassionate, he states simply, “You earned this, Marine.” 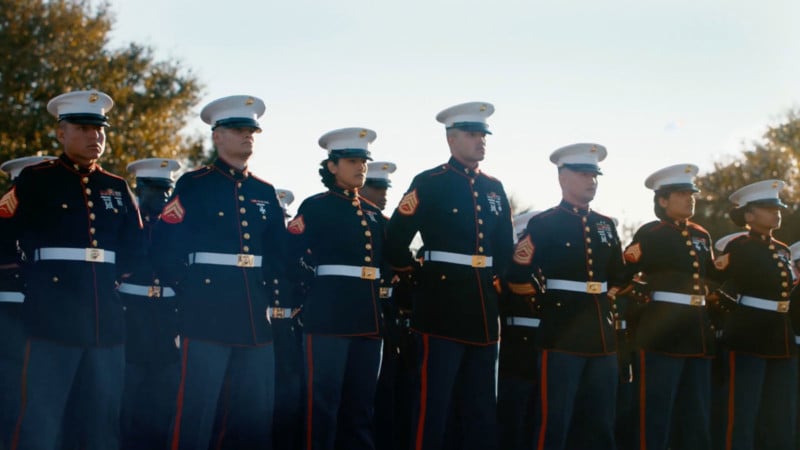 With the individual transformation complete, we’re given a variety of crane shots that shows the order, symmetry, and precision of the organization itself.

Notice the pull/push technique used in the gif, a technique pioneered in 1958 Hitchcock’s Vertigo. Zooming in with the lens while you dolly the camera in reverse allows the subject to remain the same size within the frame while the background expands. This has the effect of making the foreground seem even more imposing and powerful. 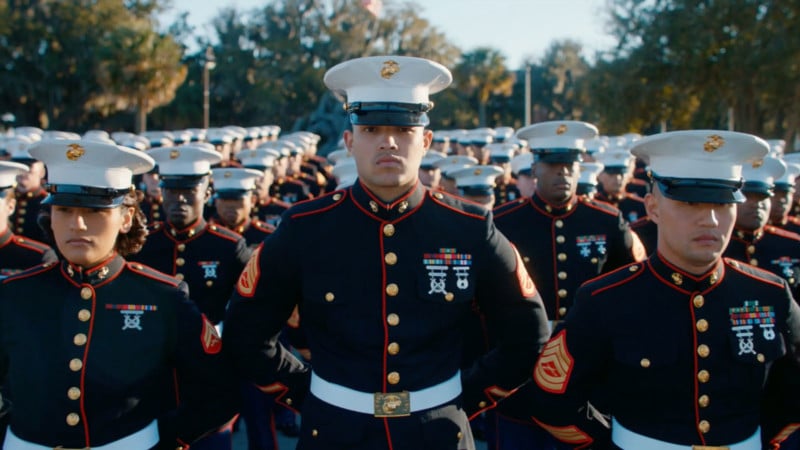 Closing the loop, we finish where we began, with our main character. He is now squared off with the camera, standing at parade rest (reminiscent of this ad from WWII) though in 2020 he is now flanked by noncommissioned and staff noncommissioned officers, with rows and rows of freshly minted Marines behind him. One key distinction is that unlike the figure from the poster, he is not looking down on us, the camera or perspective is now eye level – communicating that we are equals, at least in potential and opportunity.

About the author: Doug Jackson is a photographer based out of Orlando, Florida. He holds a Bachelors of Science in Film and served as a U.S. Marine in the Iraq War. You can find more of his work and writing on his website and blog./em>