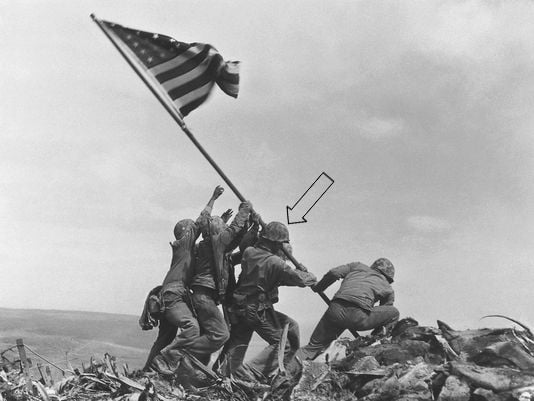 The U.S. Marine Corps has officially corrected photographic history this week. After a formal investigation, the Corps is admitting that one of the men in AP photographer Joe Rosenthal’s iconic WWII photograph “Raising the Flag on Iwo Jima” has been misidentified for the past 71 years.

The misidentified man, Navy Pharmacist’s Mate 2nd Class John Bradley, is not depicted in the Pulitzer Prize-winning photograph, the Marine Corps announced Thursday. The man we’re pointing to in the photo above is, in fact, Private 1st Class Harold Schultz.

The investigation was launched almost a year after a couple of amateur historians, Eric Krelle and Stephen Foley, used other photos as evidence to raise doubts about the identity of two of the soldiers, one of them Bradley. They claimed that Bradley’s pants, helmet, and belt didn’t match those of the man identified as Bradley in the iconic photo.

Now we know why.

For many of us this is an interesting historical factoid, but the news probably comes as a blow to one person in particular: John Bradley’s son James Bradley, author of the best-selling book about his father, “Flags of Our Fathers,” which was later turned into a feature film by Clint Eastwood.

Though he recently admitted that he wasn’t certain his dad was there, Bradley Jr. has spent years publicizing the story. Now, 70+ years later, it turns out his father John Bradley was definitively not in the original photograph.

As for the Marines, who for a long time stood by the idea that Bradley was the man in the photo, the Corps seems unfazed by the findings.

“Although the Rosenthal image is iconic and significant, to Marines it’s not about the individuals and never has been,” Marine Corps commandant Gen. Robert Neller said in a statement. “Simply stated, our fighting spirit is captured in that frame, and it remains a symbol of the tremendous accomplishments of our Corps—what they did together and what they represent remains most important. That doesn’t change.”

7 Reasons Why Fisheye Lenses Are Awesome

Amateur Astronomer Discovers New Moon of Jupiter in Photo from 2003