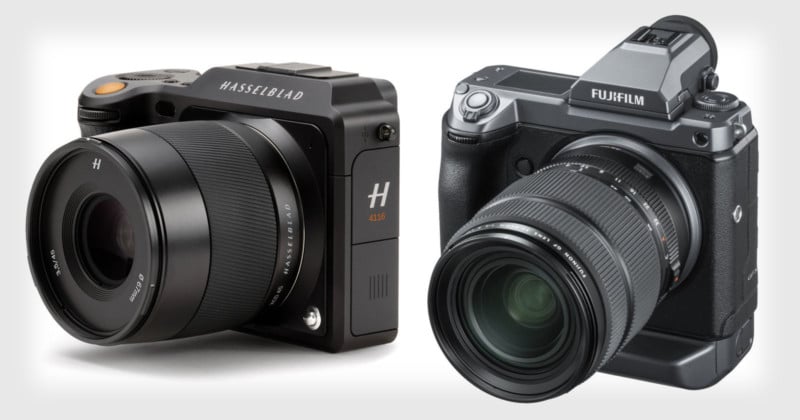 Hasselblad. The company that went to the moon. A company known for producing some of the most iconic cameras in history. Since 1948, when Hasselblad produced its first consumer camera, it has built a strong reputation within the industry. As with many companies, it has had a few bumps in the road, but for the most part, it remains a highly respected organization.

I previously talked about how Fujifilm is now the main player in the industry. With that in mind, how now can a company like Hasselblad compete?

Fujifilm is a huge organization. It is a company that’s currently about 3 times the size of Nikon. Individually it is larger than the whole medium format industry and DJI combined.

Some of you may want to point out how its camera division is smaller than the rest of the company. While that is true, it’s important to remember that just its Instax division is set to be a billion-dollar segment in the next year. This is more revenue than what Phase One, Hasselblad, and Leica generate, combined.

This is also without taking into consideration what Fujifilm’s X mount and GF system generate. Once again, Fujifilm is a huge organization. It is the largest player in the medium format industry and it has the most amount of investment potential available.

With its recent deal with Phase One and the announced specs of the upcoming GFX 100S, it seems Fuji is putting its resources to good use. It seems to want to dominate the industry, and with its extensive experience in medium format, this may not be difficult for it.

What’s interesting to me is that in some respects, Fujifilm seems to want to act as though it is the underdog when in fact it is the overlord in medium format. This is by no means a bad thing — the point is simply that competing with such an organization is not going to be easy.

When news first came out that Hasselblad may have been acquired by DJI, many people considered this to be a bad thing. I was actually quite excited by the news because I was looking at the potential. DJI is a relatively young company that’s seen incredible success in a very short space of time. Its products are simply brilliant, and it has essentially cornered the whole market. If you want to buy a drone, for many people DJI is the only option.

As a company, it also generates a significant amount of revenue from its drones and this has allowed it to innovate and possibly even purchase companies like Hasselblad. I believe DJI can really help Hasselblad depending on the kind of deal they have together.

The Hansen years have taken a massive toll on the company’s brand and this takes time to redevelop. In essence, I think DJI need to help Hasselblad with developing more high-quality products before DJI can leverage the brand for marketing purposes.

The most important thing to remember is that any new products that are developed must remain true to the Hasselblad brand. The last thing anyone wants to see is something like another Ferrari camera or a rehashed Sony.

The Hasselblad brand and company means far too much to the history of photography for that to happen again.

I still think the camera is stunning. The construction is fantastic the dials and the grip just feel premium to me and I think Hasselblad has something special with this camera. I also think Hasselblad rushed the camera out of the gate to try and be first. This is why when the camera was first released there were some major issues, bugs, and glitches. Reviewers did not take kindly to this and many early reviews panned the camera. Unfortunately, this perception stuck with the majority of people even after the camera had been improved with updates.

Recently, however, I’ve been testing and using the Hasselblad X1D with a number of lenses. In short, I’m very impressed with this camera. There are a few minor issues — the lack of having a joystick is a bit of a pain and the start-up time is slow — but aside from that, I thought the camera performed really well. I was very surprised at how much I liked and enjoyed shooting with the X1D.

Most importantly, the lenses are superb. Focus by wire is frustrating at times, although that’s more of a personal preference. In any case, the lenses that I did use were brilliant. My favorite go-to lens was the XCD 45mm f/3.5. 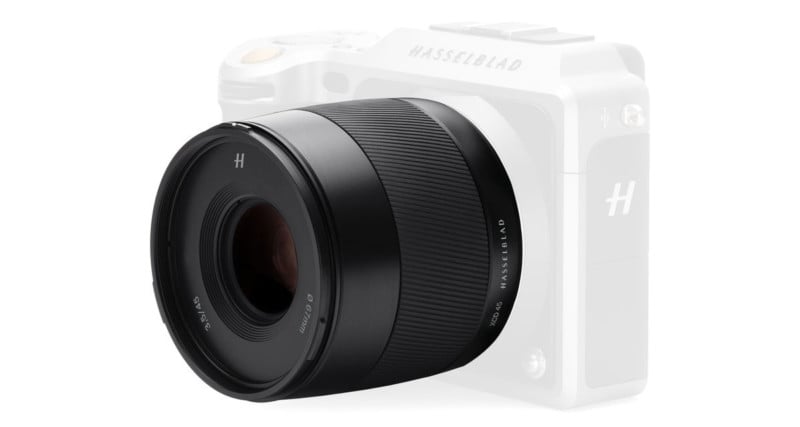 I found this lens was not only great at focusing but the image quality was stunning.

Even in low light scenarios, shooting at high ISO was relatively fine.

I absolutely loved the kind of images this camera was producing. The X1D feels like a lot of time and effort has gone into developing it. I also get the feeling that engineers at Hasselblad are enjoying developing new lenses for this mount. This is the Hasselblad I want to see more of because this is what the company is supposed to be known for. High-quality cameras and lenses that bring you joy when you shoot with them.

Now you may be wondering why I’m gushing about this camera. Well, it’s because I think this camera is what’s going to help it compete against Fujifilm.

This is not going to be a popular opinion, especially among many Hasselblad photographers, but hear me out first. Let’s face it, mirrorless is the future and most companies seem to have accepted this. The H mount will be discontinued at one point or another, and now is the perfect time to start working towards that.

The reason I say this is because almost every company is starting to shift over now anyway. Therefore, it’s not going to seem out of the ordinary if Hasselblad did the same. Just to be clear, I’m not suggesting that Hasselblad should discontinue this mount tomorrow, but it should start the process now.

It’s outdated, has a huge flange distance, the current lenses for the mount are not the best and developing new lenses for this mount is challenging, especially on the wider end.

I previously reviewed and discussed the H mount lenses and for the most part, they’re not that great. Developing cameras with the huge mirror box is also preventative when it comes to new and interesting features. Essentially it takes up far too much space.

The alternative that I strongly suggest is that it shift over to its new XCD mount because this mount has a huge degree of potential. Hasselblad can continue supporting the H mount as it does many older cameras that have been discontinued. Support doesn’t need to go, but new developments and cameras with the mount do.

The XCD mount also offers an adapter anyway, so photographers can still use H-mount lenses. This is no different from how Canon or Nikon are working towards developing their new mirrorless mounts. Ultimately, the H mount has had its time and now Hasselblad should start looking to the future with its new XCD mount.

As discussed above, I think Hasselblad should discontinue the H mount and continue future developments with its new XCD mount. The question some of you may be asking is how? If you remember, a couple of years ago Hasselblad presented a concept camera called the V1D.

This was a beautifully designed modular camera that was inspired by its 500C series. Build quality was incredible, the grip handle could be placed on either side of the camera and it was a mirrorless body. The body was also significantly smaller than the current H6D camera which is a very useful feature. A camera that is like the V1D with the XCD mount would be an incredible option.

To make this work, the square format sensor wouldn’t be practical. This camera would also need to only use the larger version of the medium format sensor. Essentially there needs to be a separation between the formats. The X1D would use the smaller variant only and the V1D type camera would use the larger version only. Both cameras can still use the same mount and certain lenses specific to the larger sensor would need to be developed.

A company that has done this very successfully is Sony. Its current E-mount operates with both APS-C and full frame lenses. If you use an APS-C lens on a full frame body, the camera will allow you to shoot in APS-C mode, preventing any dark corners. Hasselblad could do something similar in order to make this work.

Why This Will Help to Remain Competitive

Using the same mount for both systems offers a clear path for upgrading. The X1D is Hasselblad’s “entry-level” camera system. Its current flagship is its H-mount system, but there’s no proper link between the two.

Having a clear path to upgrade is extremely important. When you have customers that are heavily rooted in a system, it not only prevents them from switching but also increases their chance to upgrade. Essentially, they can have the X1D as their smaller, non-modular system that uses the smaller sensor, and the V1D will only offer the larger sensor option. This helps to create a clear distinction between the two.

Lenses work on both cameras, but the market position for both systems are clearer. The significantly lower price of the X1D also allows customers a feasible entry point into the Hasselblad ecosystem, without limiting future upgrade potential.

Hasselblad’s major advantage over Fujifilm is the fact that it offers cameras with the larger sensor. Without having a clear upgrade path, that advantage is extremely limited. The fact that Phase One is no longer offering cameras with the smaller sensor puts Hasselblad in a great position if it can get its systems in line and together.

From a very personal point of view, I would love to see Hasselblad thrive as a company and as a brand. To me, it is a pillar within the industry known for producing exceptional cameras for a very long time. I get the feeling that Hasselblad may yet have a few tricks up its sleeves and I can’t wait to see what it produces.

The road ahead may seem difficult, especially when trying to combat a company like Fujifilm. The resources and experience that Fujifilm has give it a great advantage. Not to mention the excitement it has been able to generate with its latest product announcements.

The potential backing that Hasselblad may have managed to get from DJI could be a huge help towards the future. The worst thing I believe DJI and Hasselblad can do is play a defensive strategy. Instead, if DJI is willing to invest in Hasselblad and allow it to develop interesting products like the V1D, competing will be relatively easy.

In any case, the fact that we have more competition in the medium format industry can only mean good things for consumers. The price of medium format cameras has come down by a significant degree, and even Hasselblad adjusted its pricing. Companies like Fujifilm may not be the easiest to compete against, but, I’m very optimistic about Hasselblad’s future especially because of cameras like the X1D.