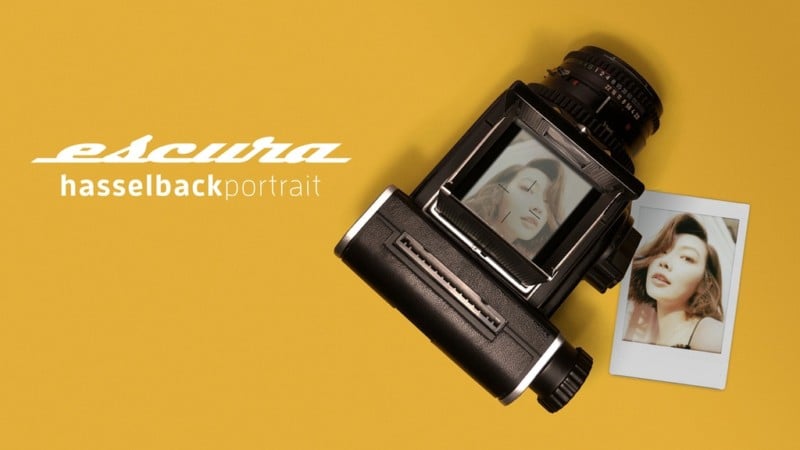 Analog photography company escura wants to “take instant photography to a new level,” so they’ve taken to Kickstarter to fund something called the Hasselblad Portrait: “the first fully compatible instant film back for your Hasselblad V-System camera.”

The concept behind the Hasselblad Portrait is pretty straightforward: it’s an instant film back that lets you shoot Fujifilm Instax Mini film—currently going for $13.50 for a twin-pack of 20 total exposures—on any Hasselblad V-System medium format film camera.

The back is designed to fit seamlessly onto your Hasselblad camera, installing in one click and letting you expose photos as normal. A viewfinder adapter, focusing table, and darkslide are also included. Once you’ve taken a photo, a knob on the side of the instant film back allows you to manually eject the photo and watch it develop.

Build-wise, the Hasselblad Portrait is made of military-grade aluminum, weather-sealed, and wrapped in artificial leather that is designed to match the fit and finish of your Hasselblad.

Here’s a quick look at the current Hasselblad Portrait prototype in action:

And some sample photos captured with the current version:

“You can take exposure shots again as easy as it has been with the original Polaroid back,” boasts the Kickstarter campaign. “However, for 60 cents per shot in comparison to $7 for expired FP100C!”

This idea has obviously resonated with owners of the old V-System cameras: the crowdfunding campaign reached full funding in just 2 hours when it launched this past weekend. With 27 days left to raise money, they’ve already banked nearly $85,000 on a goal of less than $20,000. Assuming proper management—and this isn’t escura’s first successful Kickstarter—the first batch of Hasselblad Portrait instant film backs will begin shipping to backers in July 2020.

If you want to learn more or pledge your support for the escura Hasselblad Portrait, head over to Kickstarter campaign page where you can still “reserver” a 1st batch Hasselblad Portrait for 25% off the eventual retail price, or approximately $232.

Apple Reveals the Winners of Its ‘Night Mode’ Photo Contest