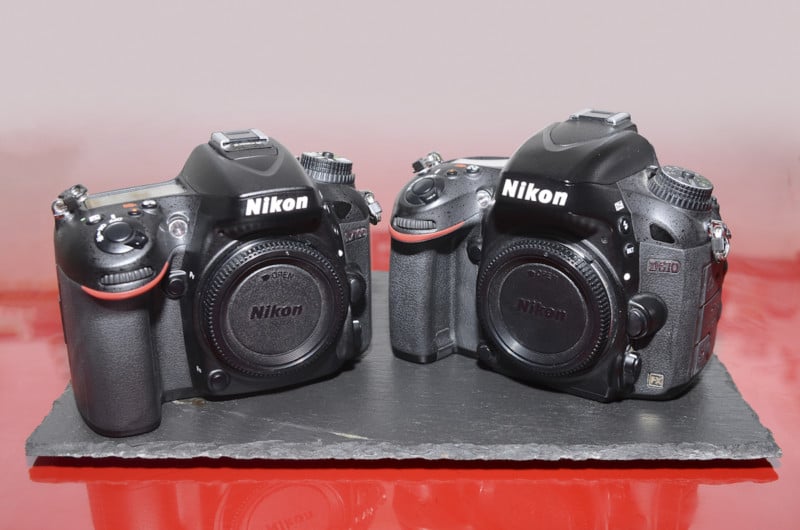 Since I got my Nikon D7000 camera 6 years ago I’ve used it almost everyday. That is a lot of shutter clicks, 148,558 to be exact. It looks like I will be in the market for a new camera soon as the D7000 is only factory tested to 150,000 clicks. My dilemma is should I go full frame, or stick with my cropped frame?

I keep asking myself, is a full frame camera really worth it? I took a Nikon full frame D610 and a Nikon cropped frame D7100 on a test drive around Paris to see the real world differences.

What exactly is a “full frame” camera?

Film was the unchallenged king for a century and the most popular format was 35mm film. It was sometimes referred to as “small format” to differentiate it from “medium format” or “large format” cameras, but for most of us it was the standard film we used. Although called 35mm, it actually measured 36x24mm.

When they started making digital cameras they used a smaller sensor than their film counterparts, roughly 24x16mm, but the bodies still took advantage of the same 35mm lens. The smaller sensor size meant there was a part of the image that never made it to the smaller sensor. About a decade ago, developers in Japan decided to increase the size of their sensors to the equivalent of 35mm film and as a very cleaver marketing ploy, called them “full frame” renaming their current cameras as merely “cropped frame.”

Makes you feel like you’re missing out right? Lets take a look at some of the key differences.

Using the same lens whilst shooting the Column at Bastille, I was able to make the angel larger in my shot in the cropped frame image. This extra zoom is great for wildlife or sports photographers.

To test out the high ISO performance I thought I would slip into the dark underbelly of Paris and visit the Catacombs. Flash and tripods are not permitted in the museum, and with only some low intensity lighting to illuminate the skulls of the over 6 million dead that lay rest there, it was the perfect testing ground.

I shot the two images with the same settings and changed the focal length to mimic the same field of view. From the offset, the D610 looks to have better ISO performance. The D7100 has a pink cast, especially in the shadows as a result of the noise of the image.

The enlargement below is from one of the shadow areas. The full frame is on the left and the cropped frame on the right. I brought up the shadow details and blacks in the processing (the same amount for both images) because grain really starts to look ugly when we do this and I wanted to push them to their limits to check the results.

Whilst they are close at normal exposure, by bringing them up like this you can see clearly that the full frame outperforms the cropped frame here. 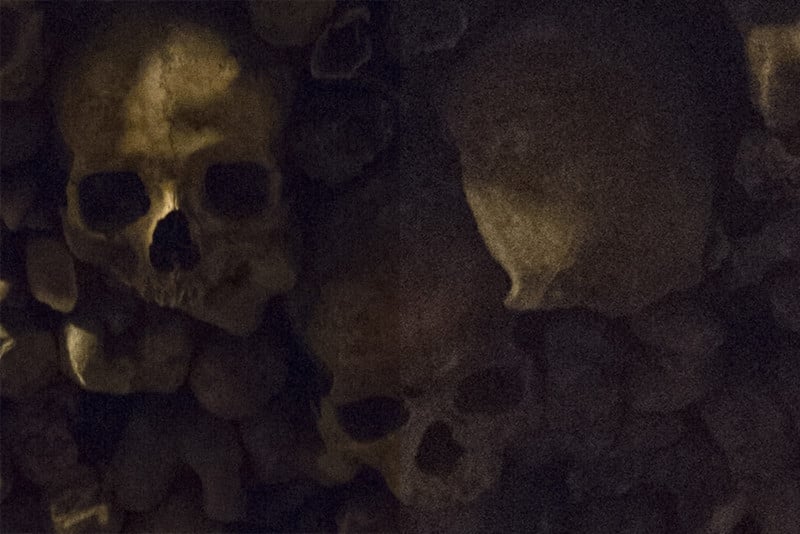 Dynamic Rage is the amount of luminance that can be captured in an image. If a scene has bright whites and dark blacks, you want your camera to have a large enough dynamic range to capture both parts of your image without blowing out to pure white, or clipping to complete blacks.

I went down to Port de l’Arsenal for this test and I must admit they look incredibly similar. I feel the full frame image here is a little more contrasty. Looking at the windows and the side of the boat, and then looking at the shadows created by the trees I honestly get confused as to which camera is which.

Then I went into the heart of the Latin Quarter to the Pantheon. At first glance, I thought the same as the port. The full frame appeared to be more contrasty and the cropped image was flatter… unless I looked at the shadows of the column on the doors.

Whilst still very dark, you can still make out the detail of the patterns in the full frame image, whereas they are almost entirely black in the cropped version.

We often hear that a 50mm lens on a full frame camera is the equivalent of a 75mm on a cropped lens. What we are talking about here is field of view.

Does a full frame camera have better Depth of Field?

Yes and no. Technically, the depth of field between a full frame 50mm lens and a cropped frame 40mm lens should be identical, their field of view will differ as explained above. So, to get our foreground subject (which, in our example, is our coffee cup) to be the same size within the image we will need to either zoom in, or move closer to our subject.

If we zoom, we will be compressing the background (and the blur with it) making it look more blurry. If we move physically closer to our subject, we will shorten our focal distance and consequently decrease our depth of field.

Canon and Nikon both make lenses specific for cropped frame cameras. Nikon call theirs FX for full frame and DX for cropped. Canon EF and EF-S. Whilst full frame lens will work with both of the different formats, the cropped body lens won’t always work. They are specifically designed for the smaller sensor and therefore have a smaller area to cover. They consequently use less glass and are usually cheaper to manufacture and will weigh considerably less too.

You can mount a cropped frame lens on a full frame camera, but is it worth it? When you shoot your image, the centre of the image will look perfect, but at the edges you will find black fall off from the smaller lens at the edge of the barrel.

Nikon has a DX mode feature in their FX cameras that essentially just crops your image back to a DX sensor size. On Canon you will just need to crop the image yourself.

When you choose to operate this, way your full frame camera will basically become an expensive cropped frame camera and behave as such with everything else mentioned here. The drawback will be the reduction in megapixels.

The D610 has 24mp but only in FX mode. In the DX mode it will drop down to about 10mp. At this point you are far better off using the DX lens on the D7100 and taking full advantage of the 24mp.

The quality of full frame lenses will be better. Both Nikon and Canon don’t make “professional grade” lens in their cropped frame series. But they will be more expensive and heavier for their quality.

When choosing a lens you should really consider this. Even if you only have a cropped frame camera now, if you think you might upgrade one day or use it on a 35mm film camera, you might want lenses that will continue to be useful with your new camera rather than having to buy a new arsenal of lenses as well.

Is a ‘cropped’ image smaller?

Whilst the field of view is “cropped” there is no cropping of your actual image. Depending on your camera the physical image size might not be smaller at all. The image size is determined by the megapixels in a camera, not the physical sensor size.

So for our test, the 24mp D610 has 24mp, practically the same file dimensions as the 24mp D7100 camera, which, as you guessed, also has 24mp. If you wanted to print images from your camera, they would both be the same maximum size because the dimensions of your image in pixels between this full frame and cropped frame camera are the same.

So which format should you choose?

I really enjoyed running these tests and analyzing the results from the images around Paris. There were a few surprises in there for me. I expected the full frame camera to outperform the cropped frame hands down, but in reality the differences weren’t as large as I thought. It does appear that the full frame has won the competition, but at what cost? The selection of lens that work with the cropped frame camera is far greater, but the quality of them is far lower. Full frame bodies are by in large more expensive but even this is changing with new cropped frame cameras becoming more professional—it is really hard to make the justification I need to make the switch.

The cropped frame can zoom 1.5 times further, and when I was out shooting the fireworks at Bastille Day, the difference between a 200mm on a cropped frame camera and the same lens on a full frame camera really makes all the difference to my shot. But if you prefer wider for street photography, then maybe you prefer the 1.5 times wider side of your lens. 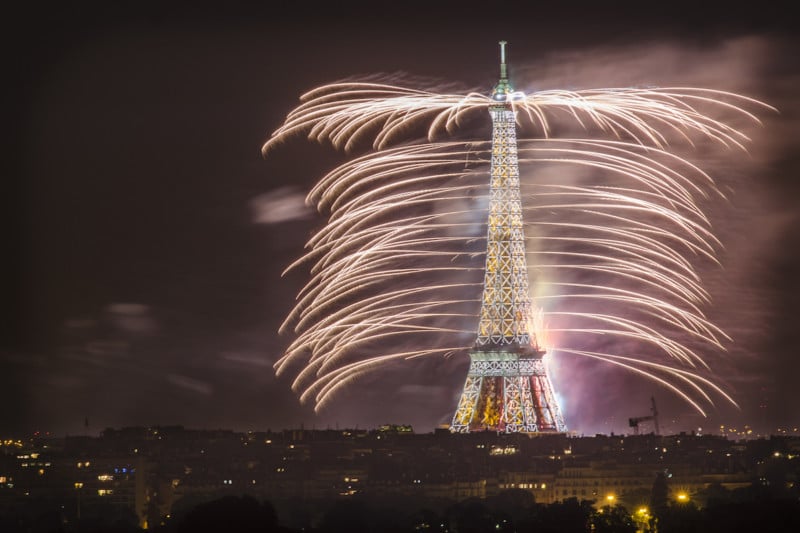 So, ultimately, this only leaves Depth of Field as an inherent change in the performance of the two formats. The rest comes down to what feels good in your hand. What other bells and whistles do you want with your camera? The cropped frame D500 offers 4K video whereas the full frame D610, which costs the same price, doesn’t. The D7100 performed remarkably against the D610 and it is half the price.

For now, I think I might keep the cropped format, and spend the extra money in some new higher quality lenses to really get the best from both worlds.