Reporters Without Borders just released this new video, titled “War Reporters,” as part of a new campaign to raise awareness and support for conflict photographers.

“Without independent reporters, war would just be a nice show,” the video says. “Support those that risk their lives to bring us the truth.”

The number of conflict photographers covering wars has dwindled 40% over the past 15 years, the organization says, but without them, we would never know the realities of war. Governments paint a heroic and rosy picture of war through their official photos and videos, but it’s the front-line photographers that show us the realities of violence, injustice, and suffering.

Renowned war photographer James Nachtwey says: “I have been a witness, and these pictures are my testimony. The events I have recorded should not be forgotten and must not be repeated.”

Nachtwey received a Lifetime Achievement Award from the American Society of Magazine Editors in early 2015, and he accepted the award with a powerful speech on the power of photography to change the world. A famous photo of Nachtwey at work is featured prominently at the end of the video above: 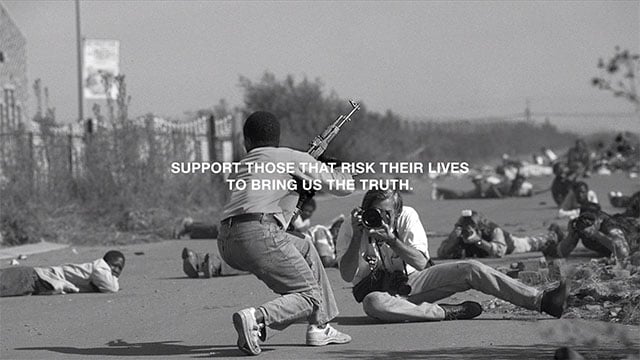 “Let’s support those who risk their lives every day to keep us informed and provide us with independent images that are very different from the official ones served up by governments,” writes Reporters Without Borders. “Let’s support photoreporters, so that they are able to work in way that provides a vision of the world that is nuanced, human and complex, one that makes a debate possible.”

“Let’s support those who show us what the official images don’t show.”

(via Reporters Without Borders via Co.Create)