Conflict photographers like Michael Kamber and Louie Palu have spent years covering the conflicts in Iraq and Afghanistan. They’ve lost friends, been very nearly killed themselves, and come back with incredible (and sometimes hard to stomach) photos.

Both of their work is currently on display alongside many of their peers’ at the Corcoran Gallery of Art in Washington DC, and in the short video above, they share the stories behind some of their most moving imagery. (Note: the above video contains some strong imagery)

The exhibit, titled WAR/PHOTOGRAPHY: Images of Armed Conflict and Its Aftermath, actually began at the Museum of Fine Art in Houston and covers conflict from 1846 through the Spring of 2012:

But when ReasonTV sat down with Kamber and Palu, the subject was the most recent conflict.

“Those of us who are lucky enough to survive, we get to come here and be at this museum and do this opening,” says Kamber, who almost lost his life when an IED exploded right behind the Humvee he was traveling in. “But we also have a responsibility to try to keep telling the story.”

Kamber has spent a decade photographing the Iraq war. His book, Photojournalists on War: The Untold Stories from Iraq, contains images from 39 photographers, all friends of his, not all alive to see their work in its pages. Palu has a different perspective to offer. A documentary photographer, he quit his job and went back to Afghanistan in 2010 to photograph some of the worst conflict zones without an editor to guide or censor him. Though he arrived with what he calls “youthful, naive excitement,” all of that changed when he covered a suicide bombing.

“Something photography does not do, is it doesn’t explain two essential things about war,” explains Palu. “One, combat is about sound […] it’s gunfire, it’s explosions, it’s people screaming; and it doesn’t explain smell: the area around Kandahar city where all the fighting takes place is surrounded by grape fields. It is about the contrast between the grapes and the bullets … the bounty of nature and the bounty of war.”

Since he’s covering the war on his own dime, Palu’s photography — in particular his striking portrait series — offers a different view of Afghanistan than you’ll find in the majority of newspapers. 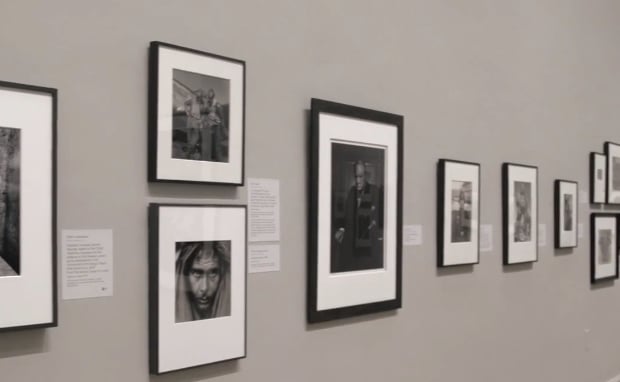 You can check out the video at the top for many more insights from both Kamber and Palu. And if you would like to find out more about the WAR/PHOTOGRAPHY exhibit, head over to the Corcoran Gallery of Art website here.

Zeiss f/0.7: You Can Now Rent Two of the Largest Aperture Lenses Ever Made