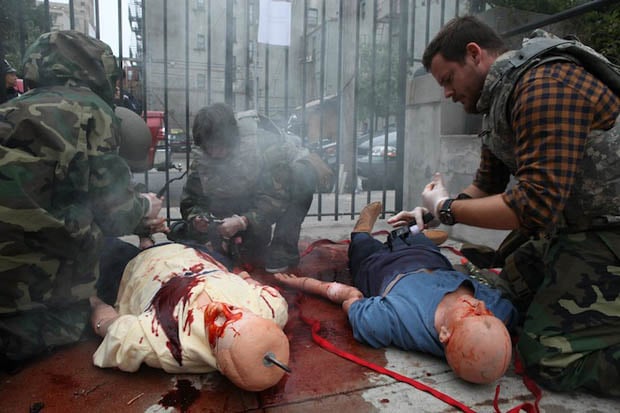 When photojournalist Tim Hetherington suffered a mortar shell wound to the groin in Libya in April of last year, he ultimately died of massive blood loss. His death, according to friends, may have been prevented. “Tim was my closest friend,” says Michael Kamber […] “He bled to death because he was surrounded by photographers who didn’t know how to stop the bleeding.”

In response to this assessment, Hetherington’s other close friend and co-director of the Oscar winning documentary Restrepo, Sebastian Junger, founded [RISC] of which Kamber sits on the board. The organization simulates real war-injury scenarios […] complete with pools of blood, contorted limbs and frenetic movement amid smoke-clad air, in order to train photographers and journalists in potentially life-saving techniques. “We go to great lengths to achieve the feel of war,” says Kamber.

War Reporters Train in the Bronx, Complete With Blood, Smoke and Gunfire [Wired]