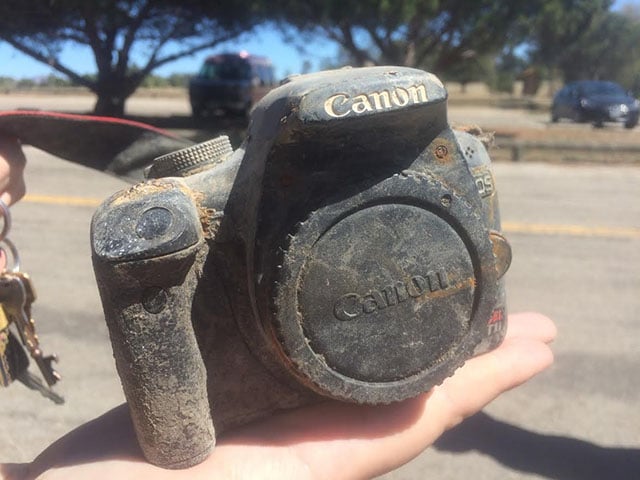 The photos on the memory card in a DSLR can survive more than what you might think. This past weekend, a man named David McFadyen was exploring Laguna Lake in San Luis Obispo, California, when he found a Canon Rebel T1i DSLR camera on the dry lake bed.

It turns out the camera had been lost two years ago, and the photographs inside managed to survive all that time at the bottom of a lake.

Local news station KSBY reports that the owner of the camera was discovered to be a Southern California photographer named Kelly Donohue, who lost the camera while covering a charity bike ride back in 2013.

The race was in a city over 15 miles away, and Donohue has no idea how the camera ended up in Laguna Lake.

McFadyen was able to find Donohue after looking through photos from the camera’s SD memory card and seeing photos from the 2013 bike race. After contacting some people from the race, they pointed him to the photographer, whom he met up with to return the camera.

Donohue tells KSBY that she’s never heard of a memory card surviving being waterlogged at the bottom of a lake, and that she’s excited to have found a collection of precious long-lost photos.

(via KSBY via Bokeh)

Image credits: Video and photo by KSBY and used with permission

How to Post-Process a Milky Way Photo in Lightroom