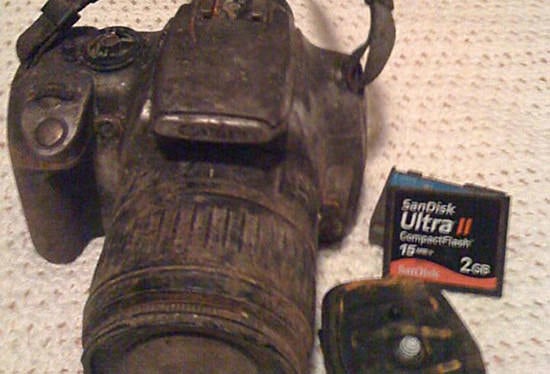 How long can photos stay alive inside a Canon Rebel DSLR sitting at the bottom of a muddy creek? A crazy new lost-and-found story suggests that the answer is at least 3 years.

The story, first reported by John Alexander over at PostStar, is fit for a Sherlock Holmes short story.

Last month, Vermont resident John Noerr stumbled upon a Canon XT DSLR sitting on the bottom of a small creek. When tried accessing the beat up memory card inside, he was surprised to find that it still worked.

There were 581 images on the card, with the most recent one dating back to June 2009 — the camera had been sitting lost underwater for roughly three years.

This is where the story gets interesting. Noerr then put on his detective hat and realized that he might be able to locate the owner using details from the photographs — photos that included glimpses of urban scenes, people, and signs.

Using two photos showing a house number and a street sign, Noerr was able to locate the neighborhood on Google Street view.

He then looked up public tax records, which revealed the last name of the house’s owner.

Finally, Noerr searched for the last name on Google, leading him to a Twitter account of a woman whose profile photo matched one of the self-portraits on the camera.

His message to the woman? “I think I found your camera in a stream in the Adirondacks”

Turns out it was the woman’s brother, Michael Comeau, who had lost the camera back in 2009 after dropping it from a bridge during a camping trip.

Just like that, a crusty camera found at the bottom of a creek was transformed from a piece of junk to a time capsule of precious photos.

Update: After having the camera shipping to him, Michael created this unboxing video:

Lost Photos: An App That Searches Your Emails for Forgotten Pictures