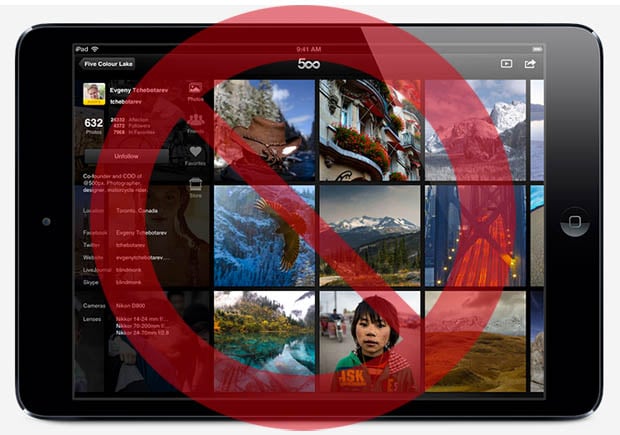 If you were planning to install 500px’s popular photo sharing app on your iPhone or iPad today, you’re out of luck. The app was abruptly yanked from the iTunes App Store earlier today over the fact that users can search for photos showing artistic nudity.


500px co-founder Evgeny Tchebotarev tells us that the situation started last night after the company received a call from Apple, informing them that their latest version 2.0.3 update could not be approved due to the reason stated above.

Although the company promised a fix within the next day, Apple sent an email an hour later informing the company that the app would be pulled entirely. It made good on its word at around 10am-12pm EST today.

500px is currently working to modify its backend to minimize the number of artistic nudes that can be searched for. This change will affect both future 500px app versions and 3rd party apps that use the company’s API. Tchebotarev tells us,

We are always working on better filtering, and before the change, any new account was ‘safe’ by default. The only switch we had was on the site (so that if you are fine with nude, you can enable it). Along with that, we would filter all nude photos by marking them appropriately — with help of community (there’s a report button on the web, and we get hundreds of reports a day) and customer support. In addition, we don’t allow pornographic or violent content, so such content is completely removed from the web (and Apps, of course).

The 500px app had been quite popular prior to its removal, amassing nearly 1 million downloads over the past 16 months and 80M page views per day.

Tchebotarev says his company wants to maintain a “good relationship” with Apple, but expressed frustration over the App Store’s review process, calling it “strangely erratic.”

After all, the app had been approved and available for over a year prior to this development, and has been progressively stricter and stricter with its nudity filters over time.