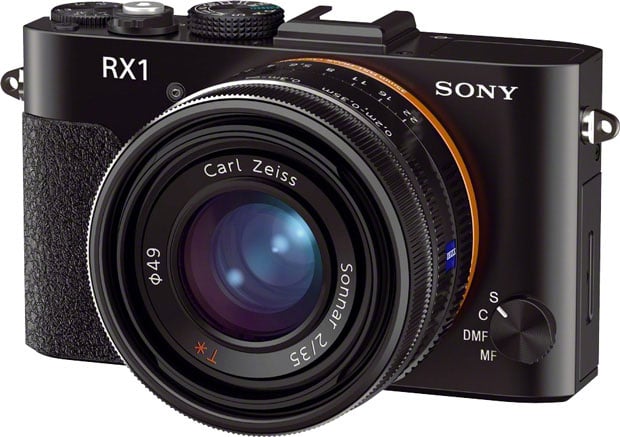 Sony shook up the digital camera world today by announcing the RX1, a game-changing camera that was somehow kept under wraps until news about it leaked a few days ago. Regardless of whether or not ordinary consumers will readily adopt it, it’s a bold camera that sets the bar for what the world can expect in a point-and-shoot. Why is it so revolutionary? It’s the first time a full frame sensor has been put inside a compact camera body.

The fact that the camera uses a fixed lens will be a downer for photographers who want the flexibility of an interchangeable lens system, but Fujifilm did the same thing when it kicked off its X-series lineup with the fixed-lens X100 (which it soon followed up with interchangeable lens cameras). Sony made a fantastic choice for the lens though: it’s a 35mm f/2 Carl Zeiss lens — the perfect lens for photojournalism and everyday photography. Other specs and features include 24.3MP resolution images, a near-silent in-lens shutter, an ISO range of 100-25600 (expandable to 50-102400), a 3-inch LCD, a macro switching ring on the lens that reduces the minimum focusing distance to 20cm, 14-bit RAW files, 5fps continuous shooting, the ability to save/restore 3 sets of camera settings, manual focus assistance via magnification and focus peaking, and 1080p/60p and 24p video recording, 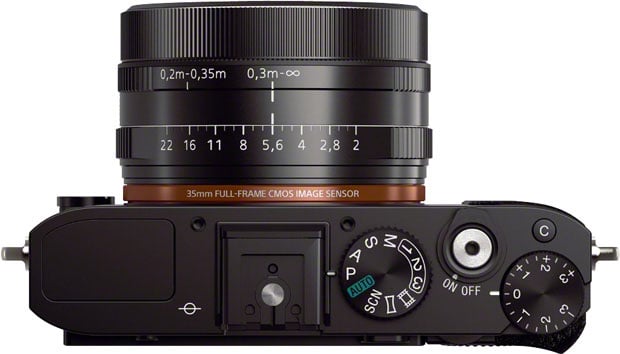 The RX1 is smaller than every full frame DSLR by a large margin, yet features the same image quality and manual controls. There’s dedicated rings on the lens for controlling focus and aperture, a dial on the front for selecting focusing mode, a main dial on the top for choosing shooting mode, and a secondary dial on the back for adjusting your settings based on which mode you’re in. If you’re familiar with DSLR controls, this camera should feel quite natural.

There’s even a mode dial on the top that’s dedicated to exposure compensation adjustments. Here’s a video introducing the RX1:

…and a quick hands-on first look:

The RX1 will hit store shelves in November 2012 for the not-so-compact price of $2,800, putting the camera in the same price ballpark as popular full frame DSLRs. The external EVF and OVF attachments will cost $600 and $450, respectively, further increasing the price for serious shooters.

This launch feels very similar to the X100 launch two years ago (wow, time flies, doesn’t it?). Both featured a revolutionary camera (with the X100, it was the sleek, retro design) with a fixed-lens and relatively steep price tag. Hopefully Sony follows Fujifilm’s lead and unleashes an interchangeable lens full-frame RX camera soon, even though it would cannibalize the NEX line of mirrorless cameras. After all, what’s a little friendly competition among family members?