One of the interesting technologies Sony introduced into its line of NEX mirrorless cameras last year (starting with the NEX-C3) was “focus peaking”, a feature from the video recording world that highlights in-focus areas of an image to aid in manual focusing. You know those colorful pixels that image editing programs use to indicate blown out or underexposed areas of photos? It’s like that, except for focus. What’s awesome is that you can adjust things like focus, focal length, and aperture, and then see the depth of field adjust on your screen in real time. Check out the 10-second video above for a demo. 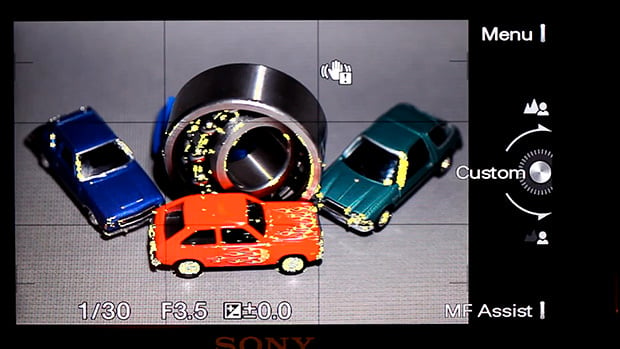 The feature not only makes eye-balling proper exposure a breeze for photos and videos, but it can help you focus precisely on very specific points — a tip of a toothpick, for example.

If you’ve been drooling over this feature and have been dying to get your hands on it, here’s the good news: it might be coming soon to a camera near you. More and more manufacturers (and third-parties) are now baking it into digital cameras: Pentax is offering it in its K line of DSLRs, and the feature can be added to many Canon DSLRs using Magic Lantern firmware. According to 43Rumors, Panasonic will be offering focus peaking as a feature in its upcoming Panasonic GH3 mirrorless camera.

Pretty exciting stuff. Before we go, here are some more demo videos to whet your appetite: