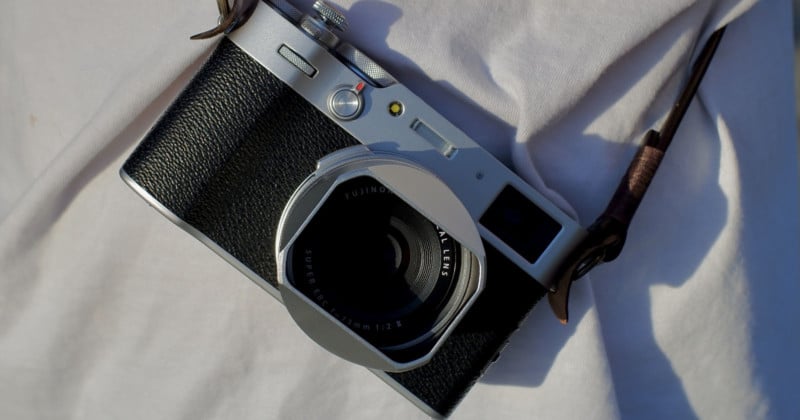 The X100V is so popular that Fujifilm has announced it is temporarily stopping orders for the digital camera because the company has too many purchases to process.

But now, less than three years later, FujiFilm Japan has announced that it is having to temporarily cease new orders due to having too many backed up to properly fulfill.

Fujifilm Japan broke the news in a public notice on its website on Thursday.

“Regarding the high-end compact digital camera ‘FUJIFILM X100V’, we have received orders that have greatly exceeded our initial plan, and we are unable to keep up with the supply of products,” the company writes. “So we will temporarily stop accepting orders from today.”

“We sincerely apologize for any inconvenience caused to our customers,” the company adds. “In addition, we will inform you again from our website about the resumption of orders.”

According to DPReview, it seems that the termination of new orders will only be impacting the Japanese market.

However, it remains to be confirmed whether the company will take similar actions with the X100V in other regions.

‘The Most Popular Camera on TikTok’

The X100V has proven to be one of the most popular cameras — with TikTok users driving up its demand.

In November, PetaPixel reported that the prices of used Fujifilm X100 cameras had skyrocketed, due to TikTok users praising the camera on the social media platform — with X100V prices rising to around $3,000 on Amazon.

On TikTok, the hashtag #fujifilmx100v now has over 4.3 million views and the camera has been lauded online for its color science, compact size, and image quality.

However, the XV100V seems to have particularly gained traction on the social media platform when photographer Kylie Katich posted a viral video series about the camera in September.

Katich captured Generation Z viewers’ curiosity when she described the Fujifilm X100V as ““a digital camera that mimics film” and declared that the photos she had taken on the model required “zero editing.”

Since then, the Fujifilm X100V has gained a reputation as the most popular digital camera on TikTok for it ability to produce the film aesthetic without shooting film.

@feelingfriday The most convenient camera to bring with me on trips is the X100V. #fujifilm #35mm #camerareview #x100v #photographyeveryday #filmphotography #kodak ♬ original sound – Kyle Rothwell

There have been videos declaring that “This is your sign to buy the Fujifilm X100V” and assuring viewers that they will never have to “worry about buying another camera… again.”

‘You Don’t Need a Fuji X100V to Take Beautiful Pictures’

While there are plenty of TikTok videos praising the Fujifilm X100V, there has been a growing number of photographers in the last month questioning the camera’s unrivalled reputation on the platform.

TikTok users, like cinematographer Kevin Lithium have poked fun at the social media platform’s singular obsession with the X100V camera.

Meanwhile concert photographer Theresa Ambat posted a video on TikTok telling viewers that they did not need to spend thousands of dollars on a Fujifilm X100V to get “beautiful Fuji colors” and suggested a used Fuji XE3 as a cheaper option.

Photographer Lisa Marie Hurley also gave advice to TikTok viewers who had been captivated by the viral videos about the pricey Fujifilm X100V and reassured them that there were more cost-effective alternatives out there. Other photographers have recommended a used Leica V-Lux 1 as an affordable alternative to the X100V.

TikTok has become a major force in terms of influencing camera trends. PetaPixel previously reported how Generation Z on social media is bringing back the point-and-shoot digital cameras of the early 2000s.