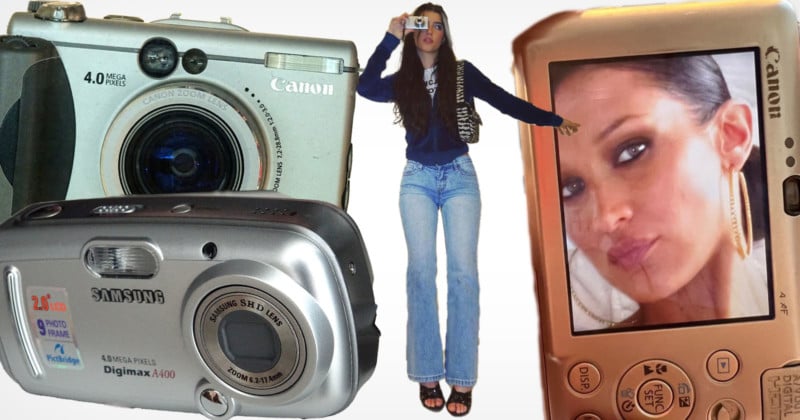 There is a new camera trend that has taken off among Generation Z users on social media. Featuring grainy images and timestamps, the point-and-shoot digital cameras of the early 2000s are making a comeback.

In the last year, these pre-smartphone cameras have been popularized by celebrities on Instagram like Bella Hadid, Devon Lee Carlson, Matilda Djerf, Emily Ratajkowski, and Nicola Peltz Beckham.

When they are not taking photos on their old point-and-shoot digital cameras, stars such as Charlie D’Amelio are instead posing with the 2000s relics looped around their wrists — while other celebrities like Dua Lipa mimic the instantly recognizable Y2K aesthetic in their photos.

On TikTok, the hashtag #digitalcamera has over 124 million views with videos declaring that “this is your sign to buy an old digital camera.” There are also clips recommending the Sony Cybershot DSC-W220, the Nikon Coolpix L15, the Samsung MV900F, and the Canon Powershot SD1300 as the best second-hand digital cameras.

There is even a video tutorial, which has over 4.5 million views, that shows TikTok users how to turn their iPhone into a “sh*tty 2000s digital camera” by putting plastic wrap and lip balm on the lens then shooting with the flash on.

In a recent article on the digital camera’s renaissance in i-D, the owner of Aperture Priority, a DePop shop selling second cameras, spoke about the rise in the demand for digital in recent months.

“Initially, I was against stocking digital cameras… Two years later and the store is 50/50 film and digital and I am currently getting more interest in digital than film,” she tells i-D.

“I think we’ve become numbed to the novelty of things — everything is on our phone now and you choose between an Apple or Android, but the cameras are all pretty similar. With digital cameras they all have a different aesthetic.”

This is not the first time Generation Z has looked to the camera technology of the past for inspiration. The resurgence in film photography and disposable cameras can be widely attributed to this younger subset of creators.

The rise of point-and-shoot digital cameras over film in recent months could also have something to do with the accessibility of this type of photography. Using a digital camera is far easier than learning to use a film camera. Moreover, film photography can quickly become a pricey endeavor with the increasing cost of developing film.

And while the point-and-shoot digital cameras may seem outdated and redundant, using this pre-smartphone technology is genuinely compelling and nostalgic for Generation Z. As a product, these digital cameras were as exciting in the early 2000s as the latest iPhone is now and younger users are able to appreciate this fact, even if it was before their time.

21-year-old Zoe Nazarian, who uses a Canon S100, tells PetaPixel “I love the fact that when you take the picture you can’t immediately post it to social media. There’s something so refreshing about taking a picture and waiting.”

She adds “I also love the ‘lower quality’ and grainy look that my camera gives compared to my iPhone.”

The popularity of the 2000s digital camera aesthetic can also be linked to the many trends that have seen Generation Z rebelling again the highly-edited, picture-perfect photos commonly seen on social media.

With the rise of 0.5 selfies, blurry photos, and apps like BeReal that ban editing and filters, there has been a shift away from taking curated photos with the latest phone camera technology. Younger users are drawn to the imperfect and authentic images taken on an old point-and-shoot digital camera.

According to an article in Refinery29, celebrities are now deliberately shooting images through an “intentionally imperfect lens” to appeal to this sentiment.

“In the blink of an eye, these stars have gone from making regular folk feel self-conscious about the sub-par camera quality of their out-of-date iPhones, to posting images that seem plucked from an unhinged pre-teen’s flip phone in the early aughts.”

Then again, perhaps it was always inevitable that point-and-shoot digital cameras would make a comeback in modern society’s cyclical culture. Regardless, there is likely to be a generation of younger users that will be revisiting and celebrating this Y2K camera technology for the next few years to come.