Instagram head Adam Mosseri admits that the company had “gone too far into video” and insists “photographers are all still relevant” on the app.

Mosseri made the statements during his weekly Ask Me Anything (AMA) session on Instagram yesterday — despite doubling down on the company’s singular commitment to video for the past year.

During his AMA, an unnamed follower asked Mosseri “How can photographers continue to stay relevant on Instagram?”

Mosseri responds “I think photographers are all still relevant on Instagram today, contrary to popular belief.”

Mosseri continues, “video still matters but we need to…” before his camera cuts off mid-sentence.

In December last year, Mosseri declared that Instagram was no longer a photo-sharing app and the company would prioritize video instead. 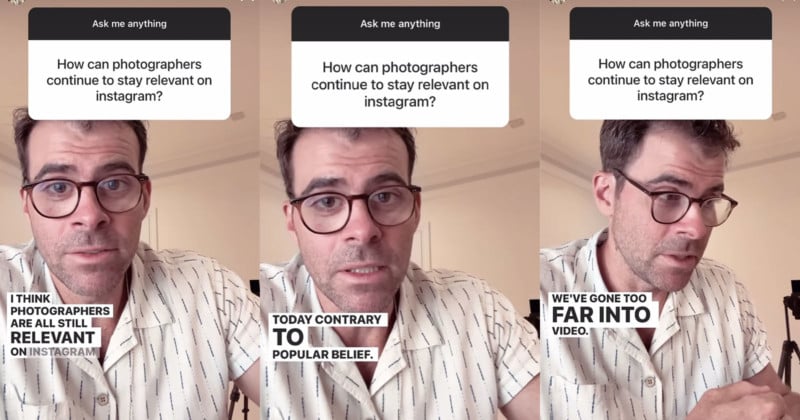 Since then, Instagram has adopted more TikTok-like features in spite of widespread backlash. Photographers have especially voiced their frustration over Instagram’s recent video-centric changes and how the app has abandoned the creators who helped build the platform into the tech giant it is today.

Mosseri’s admission yesterday that Instagram has been too video-focused may have come a little too late for photographers. In spite of Mosseri’s claims to the contrary, photographers still complain that the app no longer pushes photos in their algorithm and many have already started finding potential Instagram alternatives.

Photo-sharing app, BeReal also had the perfect growth opportunity while Instagram chased TikTok’s astronomical growth in short-form video. BeReal has surged in popularity this year and still dominates the number one spot in the U.S. on Apple’s App Store charts in the last month — even beating TikTok.

During his most recent AMA, Mosseri answered a selection of questions from anonymous Instagram followers.

Mosseri was also asked if the company would “ever expand 10 pics for photo dumps” and whether there was “a way to only see content from friends” on the platform.

Another follower asked him whether “creators are really making money” on Instagram,” and Mosseri mentioned how the company were working on subscriptions as a new form of revenue. This comes after a report yesterday revealed Meta would be adding more paid features to Instagram, Facebook, and Whatsapp.