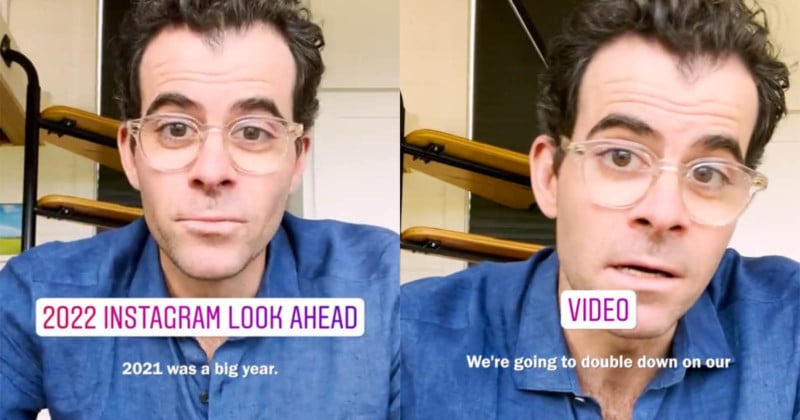 Instagram head Adam Mosseri has revealed that the social media platform will put an even bigger focus on its video features, such as Reels, in 2022. There will also be a focus on improving the app’s messaging service, monetized content creator tools, and transparency.

Instagram’s Move Away from Photos in 2021

2021 marked a pivotal shift in Instagram’s evolution after it was revealed the popular social media platform will move away from being a photography platform — Mosseri made waves in July when he stated that Instagram was “no longer a photo-sharing app.”

Instead, Instagram began to embrace video features and started exploring different business tools for influencers and brands, such as paid creator subscriptions, link stickers available to everyone, influencer affiliate shops, and more.

In a new video published to Twitter, Mosseri discussed the direction Instagram aims to take in the new year, noting that much of 2021 was already spent focusing on the app’s video formats and features, and on giving users more control over the content they consume and over the interactions with other users. For example, Instagram launched its “Sensitive Content Control” feature and allowed users to disable likes on posts to enhance the experience on the app.

This next year is going to be pivotal for Instagram. In addition to our industry-leading safety and wellbeing efforts, we’re focused on these four key priorities.

Hope you’re all able to get some rest over the holidays. See you in the New Year! ✌🏼 pic.twitter.com/iY8uQ1EnMZ

Going forward, Mosseri says the app’s 2022 priorities begin with rethinking “what Instagram is” in the fast-paced modern world that constantly changes. As part of this, one of the major focuses in the next year includes continuing the development of video features, particularly centered around Reels. The app put the plan in motion already during 2021 as it tried to attract video content creators through various paid incentives.

The app is further working to give user controls and transparency to shape how the app works for them — in the form of various privacy and safety controls, for example.

Lastly, Instagram is prioritizing influencers and other creators who make money on the platform. Mosseri says the app will introduce a number of new products that will allow creators to monetize their efforts on Instagram.