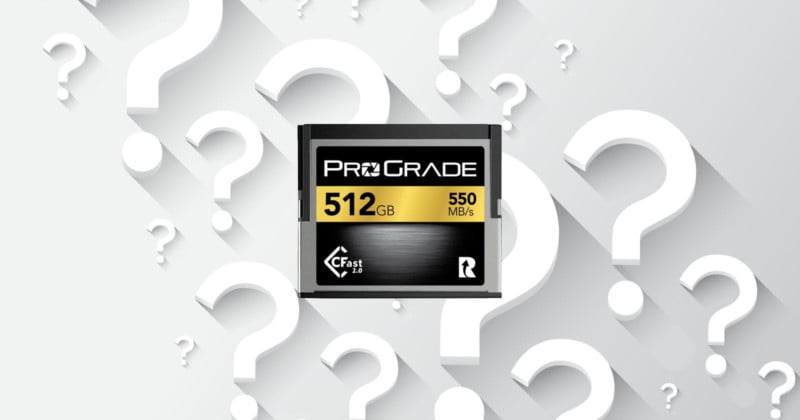 Almost six years ago, I spoke with industry experts about the state of memory cards and all of them told me that CFast was about to be a thing of the past. So did that actually happen? Is CFast really dead?

In 2016, I spoke with folks at Lexar, SanDisk, and Sony about the state of memory. At the time, CFast was the fastest memory card format on the market, but it was being challenged by a Sony memory card format called XQD. Very few cameras used XQD — namely Nikon and a few high-end Sony camcorders — and CFast could be found in a bunch of options from Canon DSLRs through RED cinema cameras. CFast was king!

But that was not to last.

The Compact Flash Association (CFA) had already decided that it was leaving CFast behind and transitioning to a new format called CFexpress thanks to a partnership with Sony. CFexpress was, in effect, XQD, and thanks to its superior PCIe design would be able to overtake the maximum speeds of the SATA-based CFast.

“From the get-go, XQD was going to be the winning pony. With the PCIe interface instead of CFAST’s SATA, it was undoubtedly more future-proof than the aging infrastructure of CFAST,” I wrote at the time.

As part of that article, I said CFexpress would roll out before 2020 and that CFast would disappear.

CFast Versus CFexpress in 2022

Most photographers who have purchased a new photography-focused camera in the last several years already know that nothing currently made by Canon, Nikon, Sony, Fujifilm, OM-Digital, Panasonic, or Leica uses the CFast memory card format. The CFexpress 2.0 specification rolled out in 2019 and was quickly picked up by a majority of camera manufacturers to the point where nearly every new high-end camera utilizes some form of the specification.

Nikon and Sony have been using CFexpress for a long time, even longer if you consider the Nikon D500, D850, and D5, which launched with support for XQD, became compatible with CFexpress thanks to a firmware update. Canon notably swapped the 1DX Mark II CFast card slot with a CFexpress one on the 1DX Mark III back in 2020.

Today, CFast is barely clinging to life in just a few select places. Canon’s C200 and C700 take CFast, but those are on close-out and once the current models on shelves are sold, no more will be produced — Adorama isn’t taking returns or exchanges for them and they are listed as “final sale.” The C300 and C500 have moved to CFexpress.

RED is still making the Komodo which takes CFast, but the company’s latest camera, the V-Raptor, has moved to CFexpress. The biggest outlier is Blackmagic, who still produces cameras that take CFast, but notably hasn’t made anything new in a while.

“For the most part, most companies have gotten out of CFast with a few exceptions,” Mark Lewis, head of marketing at ProGrade Digital says.

“CFast is limited and will not get any faster and has quickly been replaced but there are some laggards that still use the card. The Compact Flash Association created the standards for Compact Flash, CFast, and CFexpress. They moved on from CFast to CFexpress and they are not looking back,” he adds.

“Like anything in this industry, sometimes things move slower than we think but I don’t know of any new cameras that have been introduced in the last approximately year-plus that use CFast. Anything still being sold is either legacy cameras like Blackmagic’s or a camera like the Komodo that launched a little over a year ago and it feels like they are still trying to ramp up and meet their demand.”

As someone who has a giant wallet of CFast cards still, it is certainly painful to think about how much money I dumped into the format only to see it left behind. And while CFast has not truly died yet, it hardly has a pulse. I haven’t reached for one of those cards in at least four years.

The last few vestiges of the format can still be found in the video space, but the photography-focused cameras left it behind a long time ago.