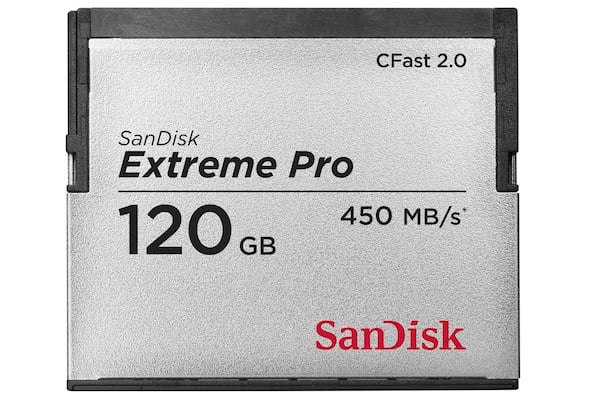 SanDisk made it clear last September that it would not be pursuing the XQD memory card format, but instead would focus its energies on CFast 2.0, the then newly-announced high-speed CompactFlash spec.

Almost a year later, SanDisk has finally debuted the fruits of that decision: a card that is both the world’s first CFast 2.0 card, and the world’s fastest memory card of any kind.

The card’s official name is the SanDisk Extreme Pro CFast 2.0 card, and by anybody’s standards this thing flies (metaphorically speaking of course). With read speeds as fast as 450MB/s and write speeds up to 350MB/s, the card decisively strips the “world’s fastest write speed” title away from Toshiba’s Exceria Pro SDHC cards.

For now, the only thing that will hold the new CFast 2.0 card down is compatibility. Only the Arri Amira currently supports the pinless cards, although SanDisk admitted to working with Canon last year, so that compatibility might be expanding very soon.

The card is supposedly already available in the U.S. and Europe at select photo specialty stores and at ARRI authorized retailers in both 60GB and 120GB versions, although no prices are mentioned (and we all know what that means).

P.S. For the regular CF card users out there, SanDisk also announced a new 256GB card yesterday that, according to the company, is “the world’s first high-capacity, high-performance CompactFlash card with the latest Video Performance Guarantee (VPG-65) specification.” That high-capacity doesn’t come cheap though … the 256GB behemoth will run you $1,810.