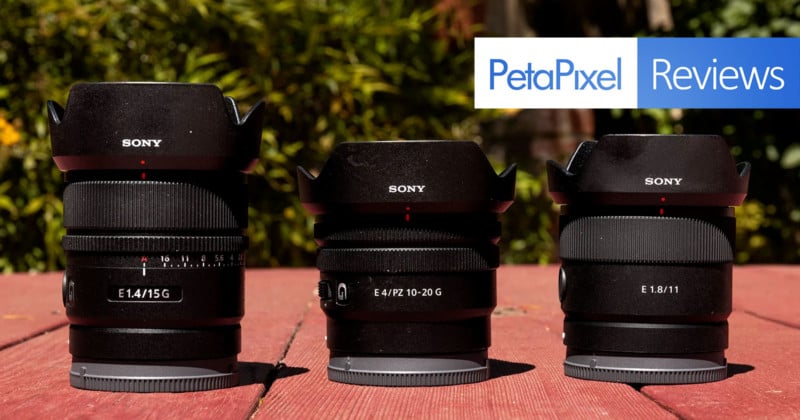 The year is 2022 and it’s apparently APS-C’s time to shine. With Canon showing off what they’ve cooked up and Fujifilm making a big announcement of their own, today Sony is bringing out three more wide-angle APS-C lens options: 10-20mm f/4 PZ, 15mm f/1.4, and 11mm f/1.8.

In appearance, the Sony 10-20mm f/4 PZ G certainly gives the impression that it is newer Sony lens. For its stubby size — about 2.5 inches wide (64 millimeters) by 2.16 inches long (54 millimeters) — there are a lot of extras on the side including a power zoom rocker, a programmable button, and focus mode switch. The miniature plastic focus and zoom rings have an infinite spin to them and feel fairly nice in motion, but adding some rubber would have gone a long way to making them feel more premium. Fortunately, the lens does not expand in size as it zooms. 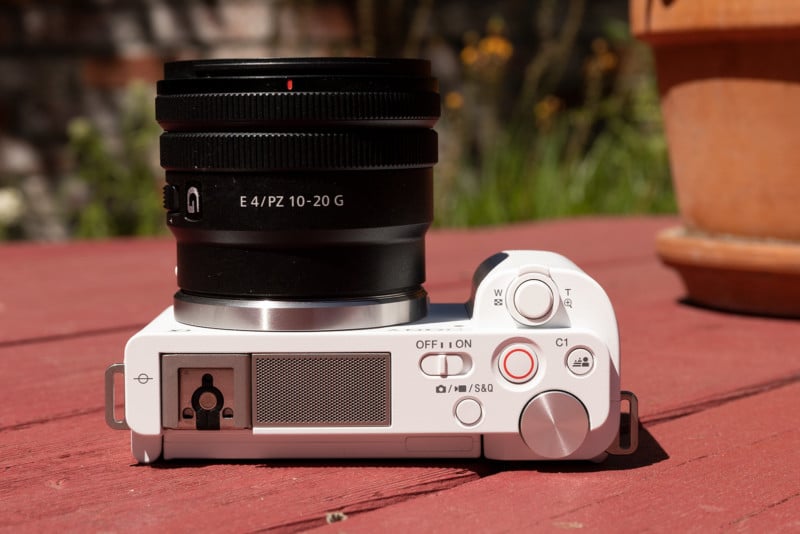 Sony claims that not only is the 10-20mm f/4 PZ G the smallest ultra-wide APS-C zoom lens but it’s also 46% lighter than competitors. It weighs 6.2 ounces (175 grams) and paired with a compact camera like the Sony ZV-E10, the total package is extremely travel-friendly. While hiking around with this kit, I would often just leave the camera in my hand for miles at a time because it felt like more of a bother to store it away in my pack than to just simply keep holding it. 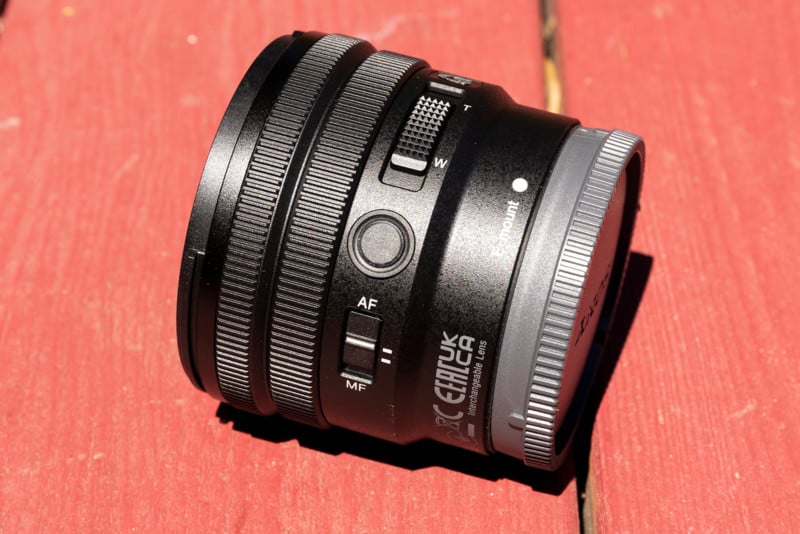 While the front element is bulbous in shape, the lens still accepts 62 millimeters filters. At the rear is a thin rubber gasket for some protection against dust and moisture getting at the mounting point.

Inside, the 10-20mm f/4 PZ G uses two extra-low dispersion elements and one extra-low dispersion aspherical element. Out of the three new lenses announced today, this one seemed to have the best performance as far as backlit shots go. The lens flaring is clean, although blobs of color can still pop up. It holds its contrast well and there’s no easily apparent color fringing at the high-contrast edges.

Testing the sharpness of 10mm at the center, I found that wide open at f/4 was OK, stopping down to f/6.3 was showing its best, and at f/9 is when the picture clearly started to lose sharpness. At the corners, it was one-stop down at f/5.6 which looked sharpest.

Looking at the sharpness of 20mm at the center, f/4 was an improvement over what was seen at 10mm, f/6.3 was still the best, and down at f/13 is when the image began to soften. The corners were interesting because it seems like the more closed down the aperture was, the softer it got. Unlike the other two new lenses today which only stop down to f/16, the 10-20mm can stop down to f/22.

The minimum focusing distance is just a few inches from the front of the lens and measures out to be 5.11 inches (.12 millimeters) at 10mm and 6.69 inches (.16 millimeters) at 20mm. This can create some interesting looks due to the super-wide angle of view while retaining focus on up-close objects. When shot wide open at f/4 like this, there’s even some possibility of subject separation from the depth of field.

If I had to pick which of these new lenses looks the most premium, the Sony E 15mm f/1.4 G would be my choice. It measures about 2.5 inches in diameter and is 2.73 inches long. It’s a tight little prime lens while still boasting an f/1.4 aperture. 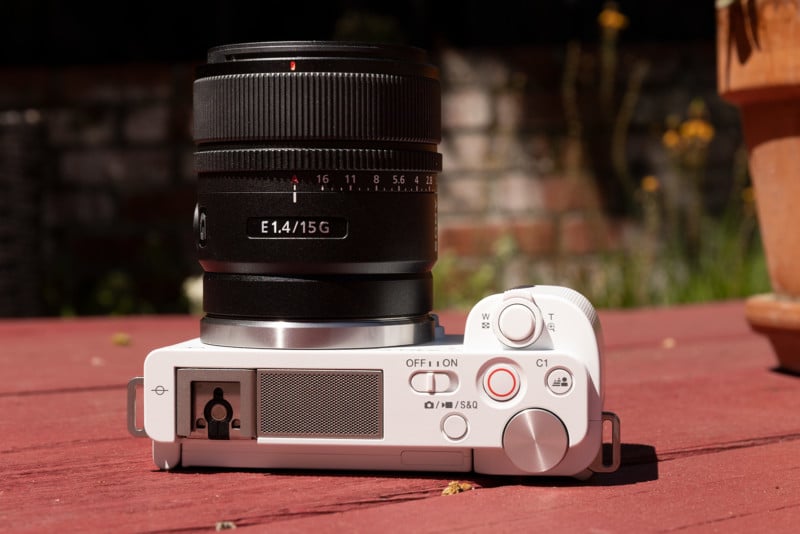 In addition to the plastic focus ring, the lens also features an aperture ring, an aperture de-click switch, a programmable button, and a focus mode switch. The focus ring feels OK while turning but would have been improved by a rubber ring instead of plastic. The aperture ring while de-clicked has a better glide than the focus ring does.

The lens weighs 7.7 ounces (218 grams) which is a little heavier than the 10-20mm but is going to be much better at working in low-light scenarios given the f/1.4 maximum aperture. When paired with the Sony ZV-E10, the kit matches up well in size and is easy to carry around for long periods of time. 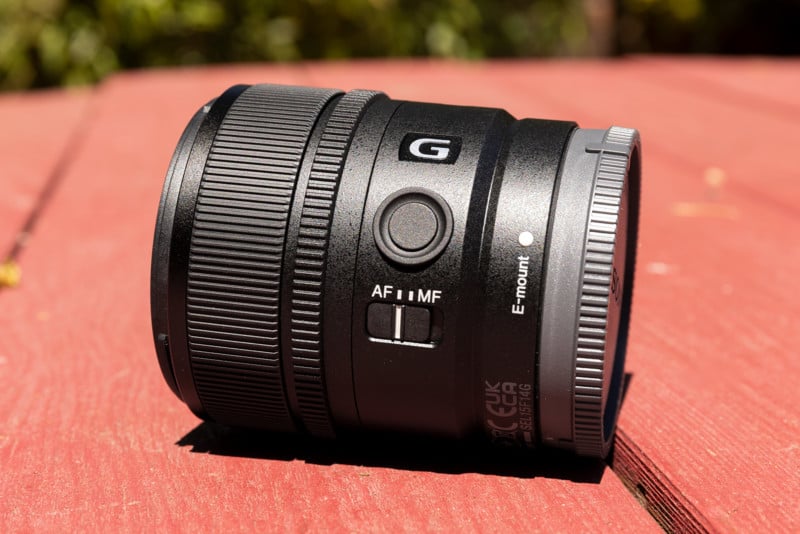 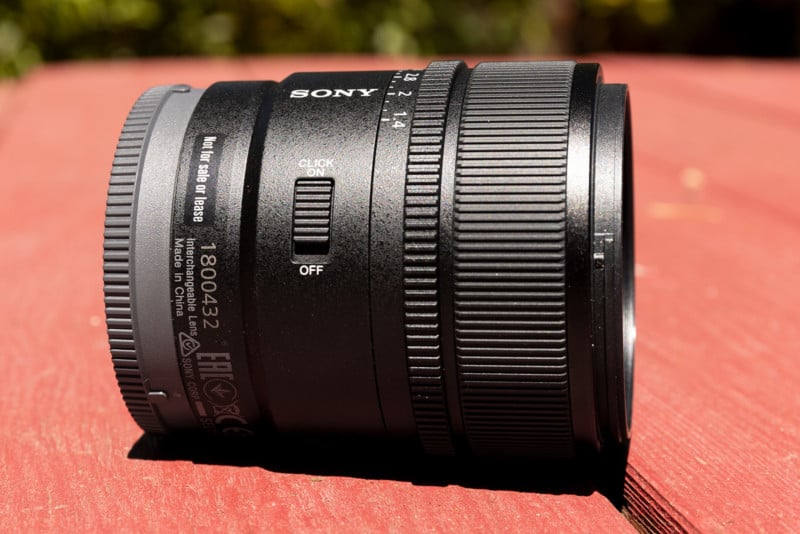 The front element does stick out a little bit, yet the lens does 55 millimeters filters. At the rear is a thin rubber gasket for some protection against dust and moisture getting at the mounting point.

Inside the 15mm f/1.4 G, three aspherical elements are used within the optical formula to help retain sharpness across the image. In my testing of the center sharpness, I saw that wide open at f/1.4 was good, down at f/3.5 was the best, and finally at f/11 is when there was apparent softening to the image from diffraction. Looking at the corners, it was f/5.6 that looked the sharpest. 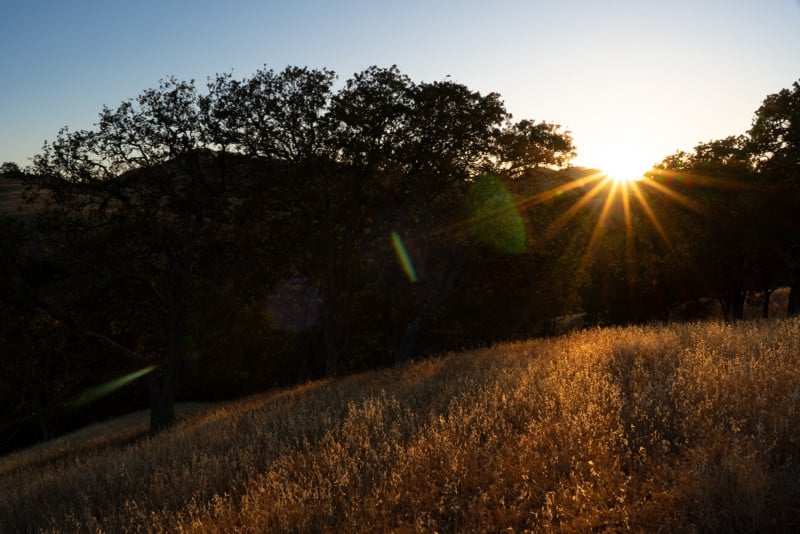 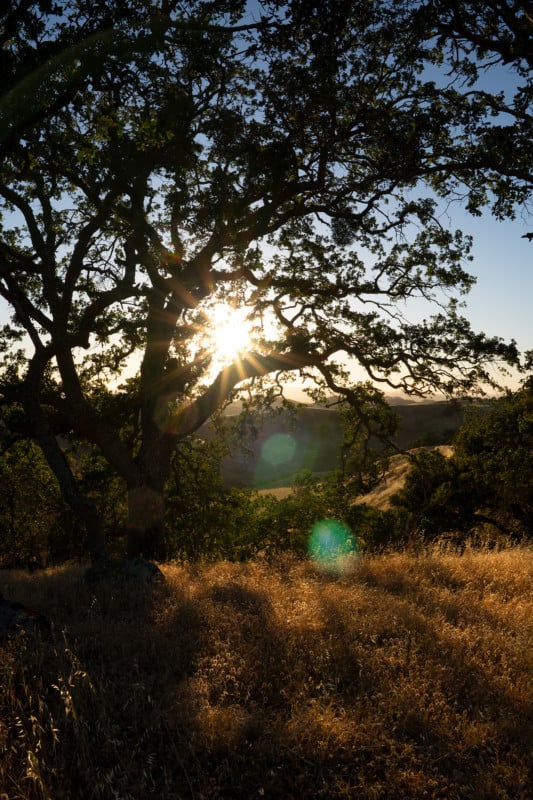 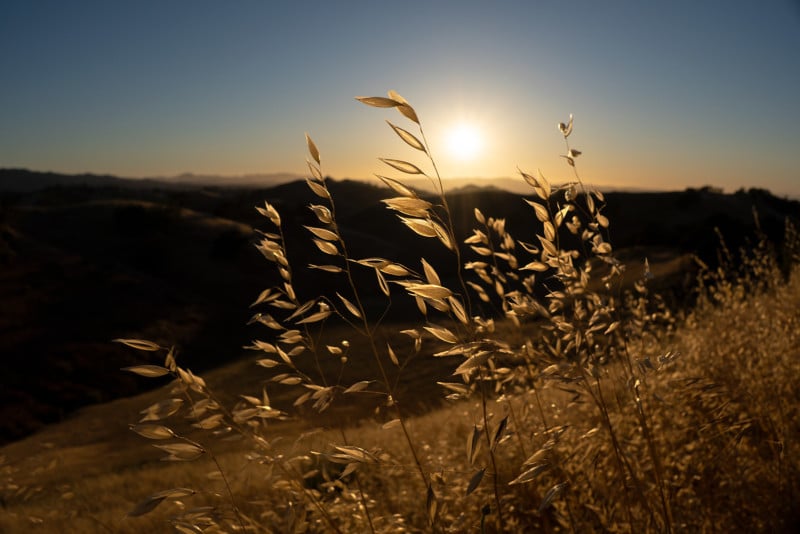 One of the downsides to the 15mm f/1.4 G is how much lens flare there is with bright light sources. I’m guessing there’s not a lot going on in the optics to prevent this, since it seems like just about every shape and color shows up across the frame. For landscape photography, I’m not sure this is the lens I’d want to buy because there will be a lot of separate exposures happening to control this and then composite together. On the plus side, color fringing on high-contrast edges doesn’t seem to trouble the lens much at all.

This lens features a seven-bladed aperture and examining the defocused areas of an image it can look fairly busy. The barrel distortion of this wide-angle lens also produces cat-eye-shaped bokeh balls which circle the center of the frame. That’s a look that I personally enjoy over something more sterile, but it’s not everyone’s cup of tea. 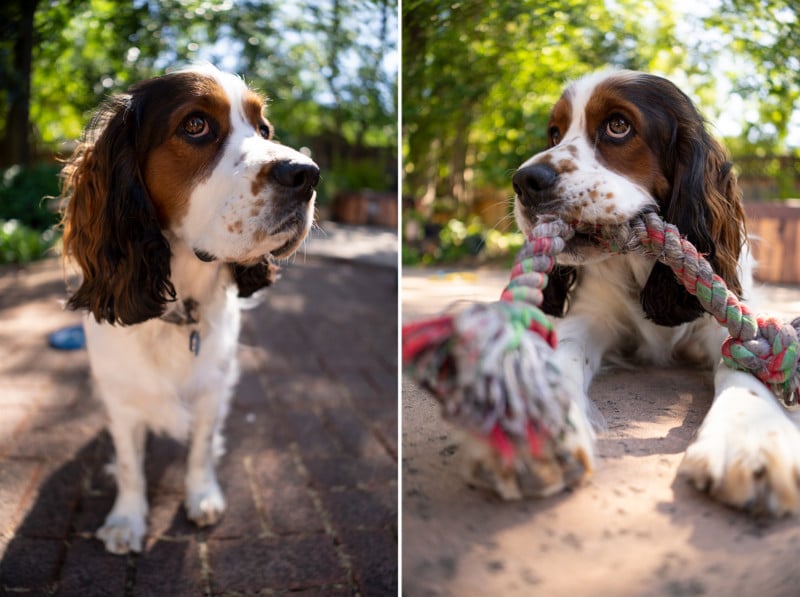 The minimum focus distance of this lens is 7.87 inches (0.2 meters) in autofocus or 6.69 inches (0.17 meters) in manual focus. Either way, at this end of things it’s going to allow for some good separation when used in conjunction with that fast f/1.4 aperture and still provide a wide angle of view.

Last up is the 11mm f/1.8 which is the only lens of the trio which does not get the Sony G designation. 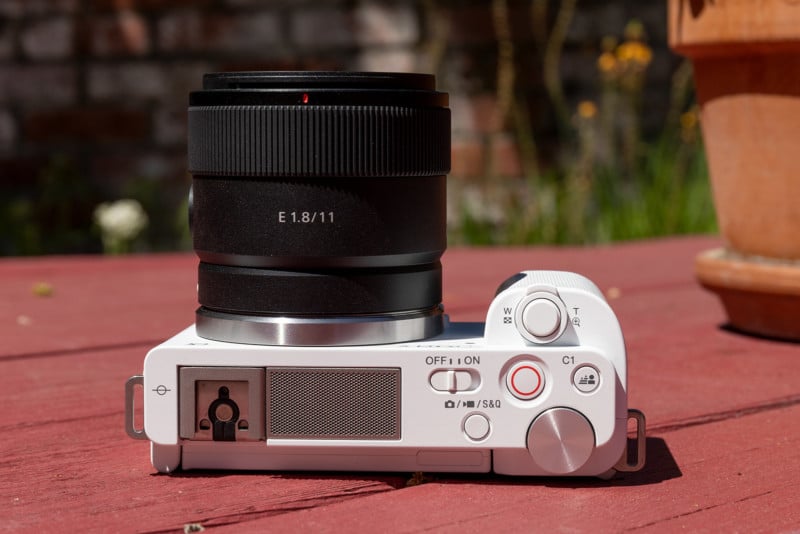 Compared to the 15mm f/1.4 G above, it’s essentially just missing the aperture ring and aperture de-click switch, otherwise retains everything else on the outside. There’s still a useful programmable button and the focus mode switch. The focus ring is plastic and has an OK glide, but compared to the 15mm it is more gritty feeling, especially on the starts and stops.

This lens measures about 2.5 inches in diameter by 2.26 inches long. It’s impressively compact considering the wide-angle of view and fast f/1.8 aperture. At 6.3 ounces (178 grams), it’s nearly the same weight as the 10-20mm f/4 featured above. These have all been easy to get along with in my hiking bag or being carried for long distances due to the compact nature of them. 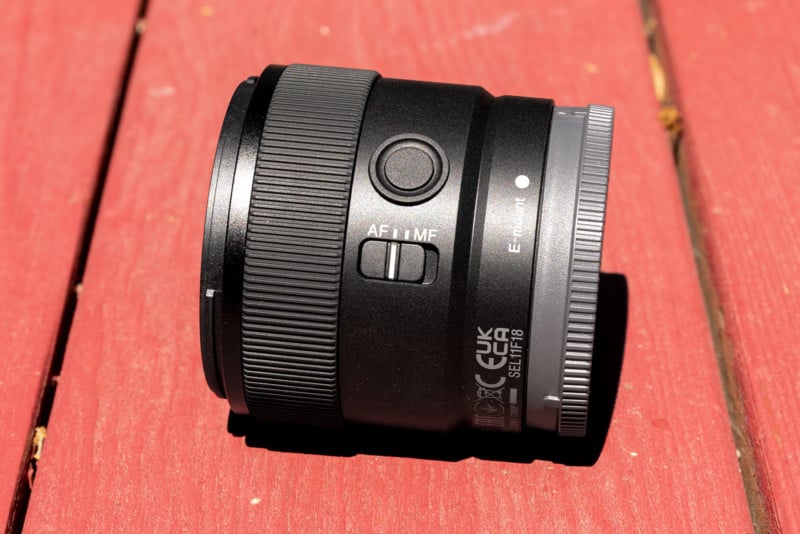 The front element is bulbous in shape, but 55mm filters will still be able to be attached. The mount side of the lens does have a rubber gasket for some level of dust and moisture protection from the elements getting in there.

Just like the 15mm f/1.4 G lens, this one also has three aspherical elements within the optical formula to help extend the sharpness from corner to corner. Testing out the 11mm f/1.8 for center sharpness, I found that f/1.8 can be a little bit soft but sees good improvement at f/2.5. Stopping down to f/5 was the sharpest and at f/9 is where the lens would begin to soften. At the corner, I saw that the more closed down the aperture was, the softer it would get. Again, as a reminder, this lens and the 15mm f/1.4 G can only stop down to f/16. 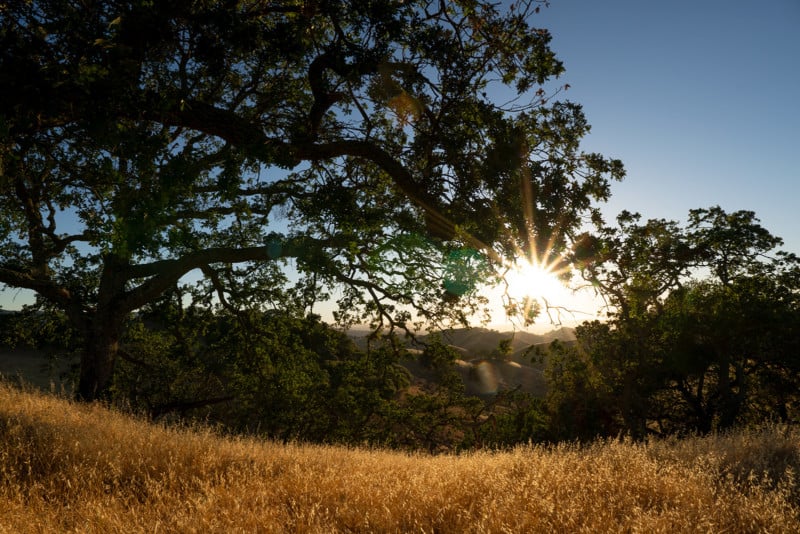 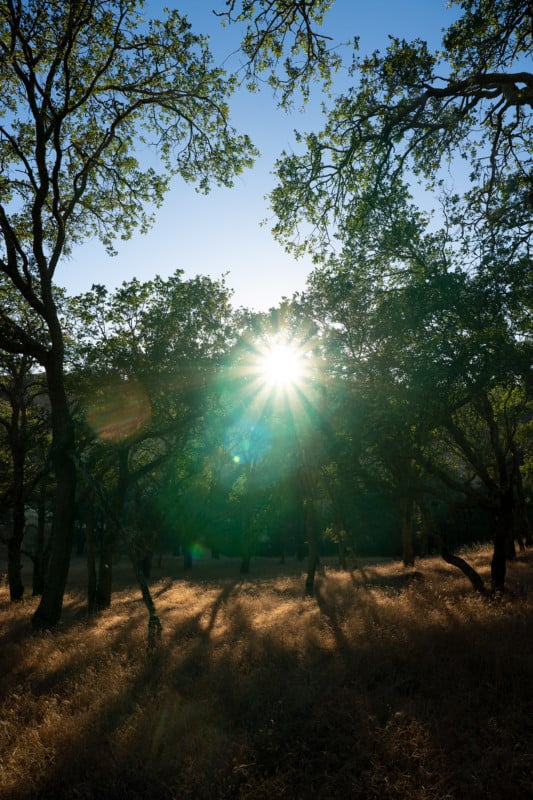 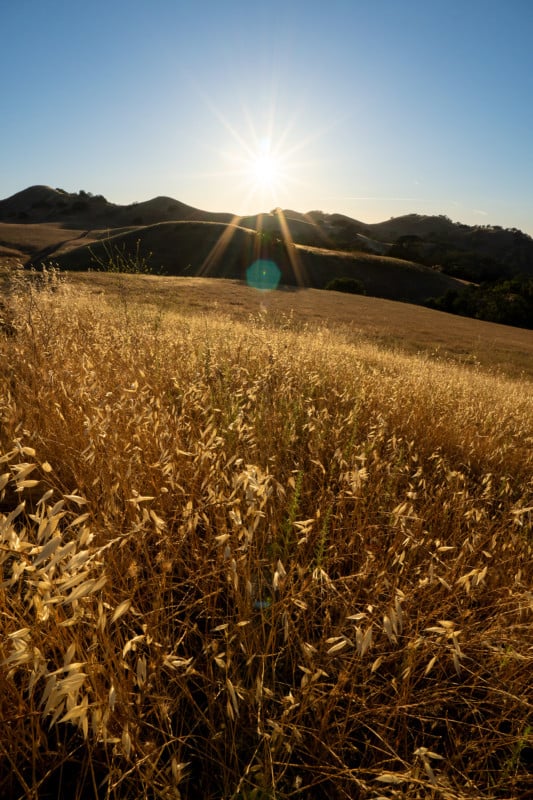 This lens seems to enjoy its fair share of flare as well. I don’t believe there’s much inside the lens to prevent this from happening, and in some cases it can absolutely take over the attention of a photo. Landscape photographers who shoot into the sun a lot will want to be aware of this problem because it will take consideration to overcome.

The 11mm f/1.8 has a seven-bladed aperture, but with such a wide-angle of view I feel it’s less of an issue here than with the 15mm f/1.4. Defocused areas are moderately busy but it’s harder to notice unless shooting very close up to get that kind of depth of field effect.

With a minimum focusing distance of 4.72 inches (0.12 meters), this does allow for interesting close-up images with a super-wide-angle look. The f/1.8 aperture is good for exposing more light onto the sensor, but again, the depth of field effect it creates isn’t going to be as pronounced.

The Future Is Wide

The world of APS-C has been moving slowly for some time now, so it’s a little bit funny that when the action picks up for Sony it’s in the form of three fairly similar lenses. I’m not sure why the company would choose to release all three of these right now, but I have to admit it’s not bad to have options. The 15mm f/1.4 G had the best overall image quality, the 10-20mm has all the versatility, and the 11mm is either going to be cheaper or wider in comparison.

Previous to the Sony 10-20mm f/4 PZ G announcement, the company also has the 10-18mm f/4 OSS in the lineup and has for nearly a decade now. The one bright spot of this lens over the 10-20mm would be the Optical SteadyShot image stabilization, otherwise it’s an easy choice to go new.

An alternative to the Sony 15mm f/1.4 G would be the Sigma 16mm f/1.4 DC DN Contemporary. It cuts away all of the extras seen on the Sony, but it gets you to f/1.4 at nearly the same focal length. Stripping away the extra features is also going to make it a decent amount cheaper as well.

The new Sony 11mm f/1.8 could be compared against the Rokinon 12mm f/2 AF lens. It’s still an ultra-wide-angle lens with a faster aperture, but it takes away a couple exterior features of the Sony.

Should You Buy Them?

Yes. Considering the prices of these lenses, I would have expected better flare suppression, but overall I can’t say it’s a deal-breaker. These are acceptably sharp lenses that go wide but aren’t wildly distorted. Best of all, they are true APS-C designs that factor in portability as much as they do image quality.