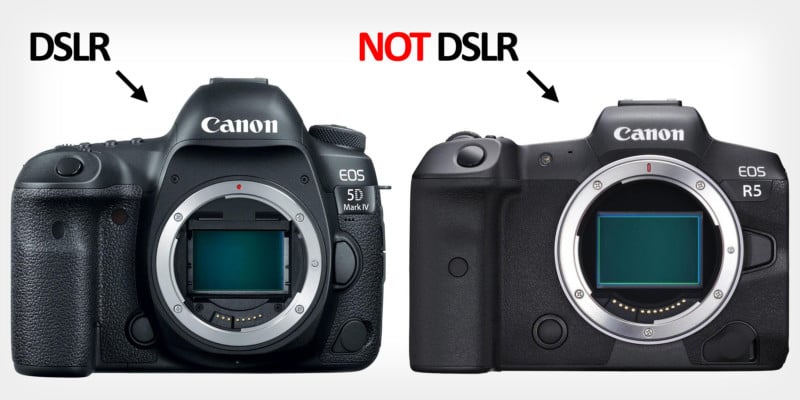 Even though the heyday of the DSLR is well behind us, it does not seem like we’re going to shed the acronym any time soon. A newly-published shopping guide by the New York Post confirms as much: nearly half of its picks for “Best DSLRs” are actually mirrorless cameras.

Standalone cameras are part of an increasingly-niche hobby thanks to the rise of the smartphone camera, and the average person these days may have no idea what they’re getting themselves into.

There is a lot wrong with this guide, titled “The 8 Best DSLR Cameras for Beginners and Pros to Buy on Amazon” (which NY Post probably put together just to try and scrape that sweet, sweet search engine traffic).

For example, while the Nikon D850 DSLR is shown in the header image and a photo of it is in the list, it’s not actually being recommended. No, the NY Post meant to grab a photo of the D7500.

I also chuckle at sentences like “If the Gods used a DSLR camera, it may as well have been this one” to describe the Olympus OM-D E-M1 Mark III mirrorless camera and “This Sony camera really is the alpha dog” to describe the two-generation-old Sony Alpha 7 II.

Even if we just look at the cameras being recommended in this list and ignore these unhelpful descriptions and misidentification, it’s a mishmash of outdated cameras that might be okay for a beginner but are probably not the best picks for a professional (the two groups this list claims to service).

Common Confusion About What DSLRs Are

But the main issue that this story points out is that the average person just has no idea what a DSLR is, and who can blame them? For at least 15 years, the term “DSLR” has commonly been used to refer to any interchangeable lens camera (versus fixed lens or compact cameras). And while hobbyists and photographers have long understood the difference, the average person generally calls anything that’s not their smartphone a DSLR.

Even today, when all but Pentax have given up making new DSLRs, the “Best DSLR Camera” has the exact search volume (the number of searches for a term in a month) as “Best Mirrorless Camera.”

NY Post has fallen into this trap. The company even goes so far as to incorrectly explain what a DSLR is:

Shutterbugs and amateur photographers alike can benefit from using a DSLR camera. The acronym stands for digital single-lens reflex, which is a type of digital camera that allows for the user to change the lenses depending on their photography needs.

To its credit, the company does actually land on the correct answer further down:

It also does have a mirror feature, unlike a mirrorless camera, that reflects the image back to you in the viewfinder to help get that perfect shot.

This is correct. DSLR cameras use a mirror to reflect the incoming light into the viewfinder, giving the photographer a real-life optical view of the world they’re framing. When the shutter button is pressed, the mirror flips out of the way and the light hits the image sensor behind the mirror. In a mirrorless camera, there is no mirror (hence the name) and the incoming light always hits the image sensor. The viewfinder is electronic instead of optical, giving the photographer a view of the world through a digital display.

Unfortunately, the NY Post‘s corrected definition doesn’t save the publication from completely ignoring that definition and recommending mirrorless cameras for nearly half of its list.

An Acronym That May Be Hard to Shake

Anecdotally, I understand this problem. Friends and acquaintances who come to me asking for a camera recommendation usually say that they want something better than their iPhone, and ask me if I can recommend a DSLR. As someone who has been deeply plugged into the photography world for more than a decade, I will immediately cringe at hearing that because I know that what they are looking for isn’t necessarily a DSLR, but any time I try and explain the difference I can see their eyes glaze over.

They aren’t listening to me, they don’t care, they just want me to tell them what camera to buy. So I’ll sigh and nod, defeated, and give them my recommendation.

Does it matter that mirrorless cameras aren’t DSLRs? No, not really. Not to most ordinary consumers who just want “good photos” of everyday life. It’s one of those things that we all know and will do our best to inform others of, but it’s a losing battle. DSLR is easier to say than mirrorless and it’s a term that appears inextricably linked to higher-end cameras, mirror or not. I give up, and am resigned to our fate: we may never be able to leave this acronym behind.

So yeah, go ahead and pick up a Sony Alpha 7 II DSLR. It’s great.