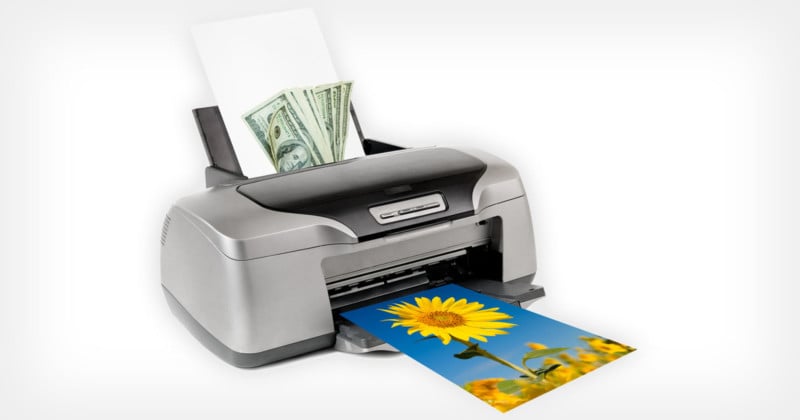 Remember those halcyon film days? You mailed off that little black cartridge in an envelope and then about a week later negatives and prints were magically returned. With the rise of digital, the inkjet printer promised instant gratification at low per print prices. What could possibly go wrong?

Well, as it turned out, plenty of things to the point that the industry is now seen as the proverbial used car salesman who sells you a thoroughbred on a promise and then delivers a turkey. Is it time to bin the inkjet before it metaphorically burns a hole in your pocket?

The rise of digital decimated the photo print industry. The Fujix DS-1P arrived in 1988 and ushered in a true end-to-end digital shooting experience however it took another decade for prices to tumble to the point that cameras became genuine mass-market products.

The 2000s were all about compact camera sales, peaking at a lofty 120 million units by 2010. And with the rise of the digital camera came digital printing. While consumers were used to receiving C-type prints from a lab, you couldn’t fit one of these in your home office; the humble inkjet printer stepped in to the breach as a low-cost, high-quality solution for the print-at-home community.

Inkjet printing technology actually dates back to the 1950s where it was actively developed by both Canon and Hewlett Packard. By the 1970s digital printers were widely available, but the SOHO (small office / home office) market didn’t kick off until the late 1980s.

I distinctly remember buying a dot matrix printer in 1990; laser printers were the top of the tree (the first desktop laser arrived in 1984 for the princely sum of $3,500!), drum printers were great for text (useless for graphics), dot matrix could do both but with marginal quality, while inkjets hit the sweet spot of quality and price. The output genuinely was good and I remember lusting after a Canon Bubblejet at the time, but they were beyond my budget.

The trick to developing a successful desktop inkjet lay in solving the problem of spraying ink from a cartridge onto a sheet of paper. The ink, print head, and paper needed to be precisely controlled so that the droplets ended up in precisely the right part of the sheet, without problems with blocked print heads.

Drop-on-demand systems became the favored solution, using a thermal process to transfer the ink. A heating element in the ink chamber vaporized the ink which formed a bubble; this caused a pressure increase ink-side, which shot a droplet onto the page. The first inkjet, the Hewlett Packard DeskJet, arrived in 1988 and cost $1,000.

Where Did It All Go Wrong?

The inkjet printer offered the fullness of the promised land: a low-cost desktop unit, low per print costs, impeccable photo quality, and (under the right conditions) archive quality output. Were you suckered in by the manufacturer’s hyperbole? Did you take marketing at face value? Well, some thirty years later the bubble (of the bubblejet) is well and truly burst: inkjets are not fit for purpose when it comes to photo printing.

The fall from grace is so big that it has shattered the dream, broken the promise. And, perhaps inevitably, it has been driven by greed. So why is the inkjet the bogeyman of photo printing?

Let’s start with the obvious problem: OEM inks are ridiculously expensive. I mean, not just extraordinarily expensive, but inordinately expensive. When it comes to expensive liquids, there are two types: those that are truly eye-watering, such as scorpion venom at $10 million per liter, and then those that will just break the bank, such as printer ink at $720 per liter. Note that this is more expensive than human blood and GHB!

The niggling question is: why is ink so expensive? While undoubtedly some R&D has gone into its formulation, it’s actually because the manufacturer has a near-monopoly and can charge exorbitant amounts. The printers themselves are sold at a loss and the profit is made on the inks. This leads to some odd market behavior as a result.

The printers obviously need to produce good quality output, but after that, anything goes. For example, there is a drive to make the hardware as cheap as possible regardless of the impact on functionality or longevity. They have become unrepairable – disposable – items that are lining landfill sites, sold on the promise of cheap, high quality, printing.

Not only that, but any development that can increase the volume of OEM ink (and paper) use as much as possible appears to be actively pursued. This might be through increasing the throughput of ink or restricting the use of third-party inks.

For example, Hewlett Packard has an Instant Ink subscription program that costs a fixed amount per page regardless of whether you print letters or photos. That can be good value if want to print photos all day every day; you use the HP inks sent to you. However, what is irritating is that the T&Cs block third-party inks forever regardless of your Instant Ink subscription. HP has got form here having previously used firmware “improvements” to block non-HP ink but rolled back after the backlash.

Meanwhile, Brother has taken a different approach to the phrase “limited life” in the form of their MFC-J4410. As with other printers, every time you switch it on, it goes through a clean cycle to ensure the heads are clear which, yes you guessed it, uses up ink at a cost of $720 per liter! That’s kind of them to maintain the printer so meticulously.

Now, what happens to the waste ink? It goes for collection to a waste tank which, when full, gives you an error message that prevents you from printing. If the tank isn’t really full (as is often the case), you may have success in using a reset code to switch the message off or might have to resort to third-party software to do the job. If the tank really is full then… you have to throw the printer away! I kid you not!

Now, Brother isn’t the only culpable manufacturer here, but the methods employed are like a sickness or disease among vendors.

Even a common scenario such as this is frustrating: you’ve successfully printed several photos and are embarking on another run of images. This time you get banding on your print so throw it away and start again. The same thing happens, so you run a head cleaning routine to clear a blockage (which uses ink), then print again. There is still a problem, so you run a print head alignment routine, run a test sheet through, and then print it again.

Now, I don’t wish to appear churlish and restrict all my criticism to inkjet printers, so perhaps the final word can go to Amazon Reviewer Hugh Coles, who commented on his brand new Polaroid Hi-Print dye-sublimation printer:

Straight out of the box the thing didn’t work! It got halfway through the first color cycle then jammed with the print half in and half out, breaking a brand new printer cartridge because the ink roll was stuck between two colors. I reset the machine, cleared the paper jam, and installed a new paper and ink cartridge but now it won’t recognize any paper or ink despite resetting/reinstalling numerous times. Now I’m two ink cartridges down and left with a broken device.

This review, more than anything I’ve seen, sums up the frustrations that users have with inkjets. They promise so much and then break that promise, and that’s before we’ve even got to the various nefarious marketing practices that manufacturers indulge in. We’ve all been tempted by the headline per page costs, which are of the order 1-15 cents for color, but really that’s just a finger in the air, best case scenario. In reality, you’ll never actually achieve that.

So what’s the answer? In this digitally connected internet age, it really is simple. Send your photos to a specialist lab to print because they can do a better job at a lower price. Then buy yourself a laser printer for office printing because they produce better output and are cheaper to run.