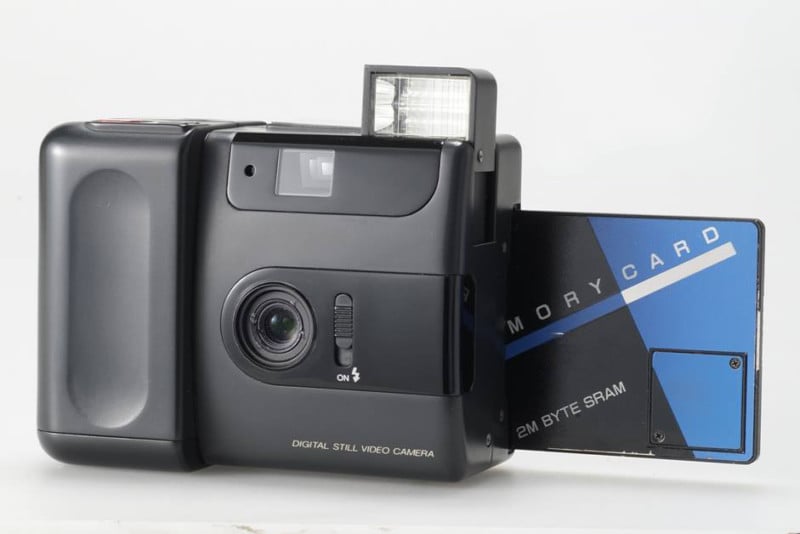 The story of the world’s first “fully” digital camera leans pretty heavily on that word “fully,” because what Fuji revealed at the 1988 Photokina show in Germany was “the world’s first camera to save data to a semiconductor memory card.”

Called the FUJIX DS-1P, it was revolutionary for its time. It captured images using a 400 kilopixel CCD that Fuji began developing in the 70s—Sassoon’s camera was created in December of 1975—but its claim to fame wasn’t how it captured digital images, but how it stored them.

Before the DS-1P, electronic cameras stored frames to a magnetic medium (analog, not digital) called a video floppy. “Although video floppies were inexpensive, their data capacity was poor,” explains Fuji, “and imperfect rotation could negatively impact image quality.” Unfortunately, semiconductor memory was extremely expensive back then, and nobody was willing to develop a camera that used it… until the DS-1P.

In Fuji’s own words:

Fujifilm saw much more affordable semiconductor memory and much higher-performance image sensors and image compression technology on the not-so-distant horizon. So in defiance of the conventional wisdom, Fujifilm took on the challenge of developing a digital camera that stored still photographs on a semiconductor memory card. The result was the world’s first fully digital camera, the FUJIX DS-1P.

It was a big deal, and just as outdated by today’s standards as you might imagine. The card, which was developed with Toshiba, boasted 2 megabytes of SRAM, and could hold between 5 and 10 photographs total. Reminds us of the 3.75 megabite IBM harddrive from the 50s that you had to move with a forklift.

This Hilariously Bad Carl’s Jr. Ad Shows a Guy Eating a Photo of a Burger