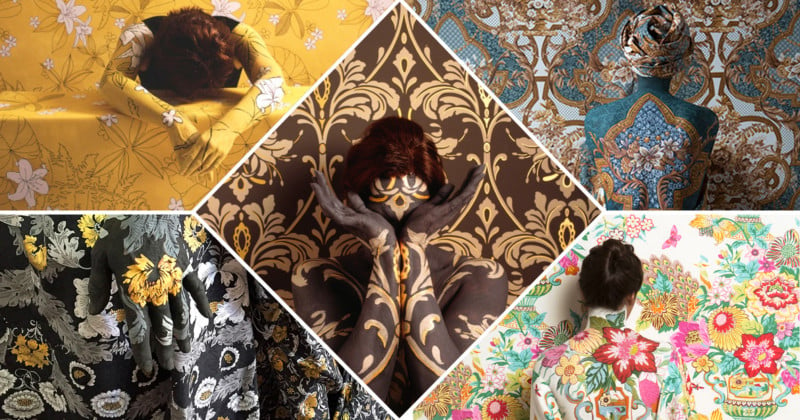 In a series of photos designed to explore the theme of identity, Peruvian photographer Cecilia Paredes camouflages her body against patterned backdrops to create gorgeous, visually-striking images.

Paredes paints her skin to match backdrops and, by presenting herself as part of the landscape, says the purpose of her images is to portray her own identity in relation to the part of the world where she lives and raise questions about how our environment influences who we are. Her face and arms are painted to match the pattern of her backdrop, with only her hair and eyes untouched.

Peru’s early citizens supposedly revered nature, and as such Paredes often chooses to blend herself into floral patterns to reflect that history. She uses a mix of patterns like animals, objects, and different fabrics to portray her thoughts on how she and others fit into the environment. The idea is to visually portray her intimate conversation with nature, and it is supposed to be challenging to see where her body begins and ends when contrasted with the patterns.

“I wrap, cover, or paint my body with the same pattern of the material and represent myself as part of that landscape,” Parades says of her art. ”
“Through this act, I am working on the theme of building my own identification with the entourage or part of the world where I live or where I feel I can call home.”

Paredes honed her skills in art at the Catholic University of Lima as well as the Cambridge Arts School in the United Kingdom. IN 1998, she was awarded the Rockefeller Foundation Bellagio Center Residency Program. She lived and worked in Costa Rica from 1998 until 2004, and now splite her time between Lima, Peru and Philadelphia.

Paredes is represented by Ruiz-Healy Art, and her work is exhibited widely across the Americas, Asia, Australia, and Europe and has had solo exhibitions at major institutions including the Moscow Museum of Modern art and the Costa Rica Museum of Art. You can also find her work as a part of numerous collections such as the Museo del Barrio in New York, the San Antonio Museum of Art in Texas, and the Museum of Contemporary art in Panama.

Image credits: All photos by Cecilia Paredes and used with permission.