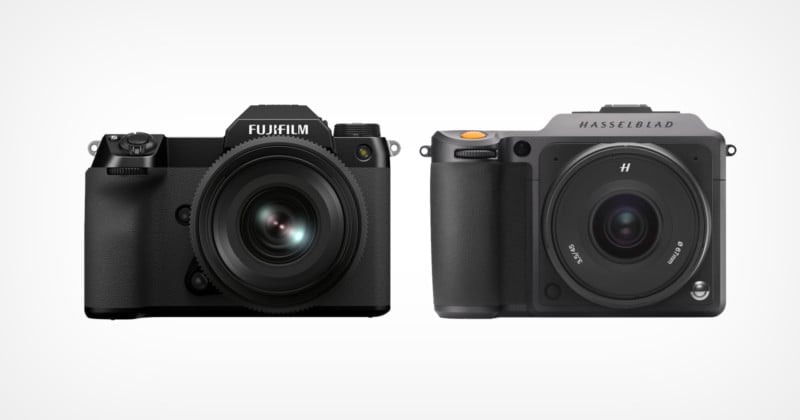 For decades, medium format film was the standard for professional photography work, so it’s no wonder that its bigger-than-full-frame resolution, shallow depth of field, and magic tonality is still sought after by pros and enthusiasts to this day.

Previously, we explored whether mirrorless cameras depreciate faster than DSLRs, what Leica-M gear sells the fastest, and which Micro Four Thirds system held up better over time.

For decades, medium format film was the standard for professional photography work, so it’s no wonder that its bigger-than-full-frame resolution, shallow depth of field, and magic tonality is still sought after by pros and enthusiasts to this day.

Of course, the industry has largely moved away from film altogether (we haven’t, though — still love it — never gonna quit it), and after a decade or so at play in the DSLR space, medium format recently joined the ranks and took the leap into mirrorless over the last 5 years.

Two brands, in particular, have been at the forefront of the mirrorless medium format race — Fujifilm and Hasselblad. Of course, both manufacturers have a long history with the format — from the 500CM to the GF670 — there’s decades of expertise and excellence on both fronts.

Both brands announced their respective systems — the Fujifilm GFX and Hasselblad X — in 2016, and have been steadily releasing cameras, lenses, and accessories ever since.

So, which system has proven to be a better investment so far? Let’s take a quick look at our data to shed some light on the subject.

Before we get into it, let me state that this isn’t a comparison of features, ergonomics, or durability. There’s plenty written on those subjects out there already, and having shot both these systems quite extensively, I can guarantee that the image quality and usability for both are excellent.

So, if you’re in the market for these types of products, there’s really no wrong choice, and I encourage you to try both out before making the plunge to see which one works best for you.

What we’ll be looking at here is the average used buy and sell prices for these systems over time to see how they stack up next to each other.

How is this helpful, you ask? Well, it can give you an idea about things like trends in purchase price and resale value, which are really good indicators of the overall health and longevity of the systems. After all, if you’re going to invest a good chunk of change, it’s good to get a sense of what the past, present, and future look like.

As always, the Tilt-Shift Report is built upon KEH’s proprietary data on these products. Being that our buy/sell prices are based on demand and supply within and outside of KEH, the trends seen here reflect what’s going on in the market as a whole, whether it’s private sales, auction sites, or other resellers. 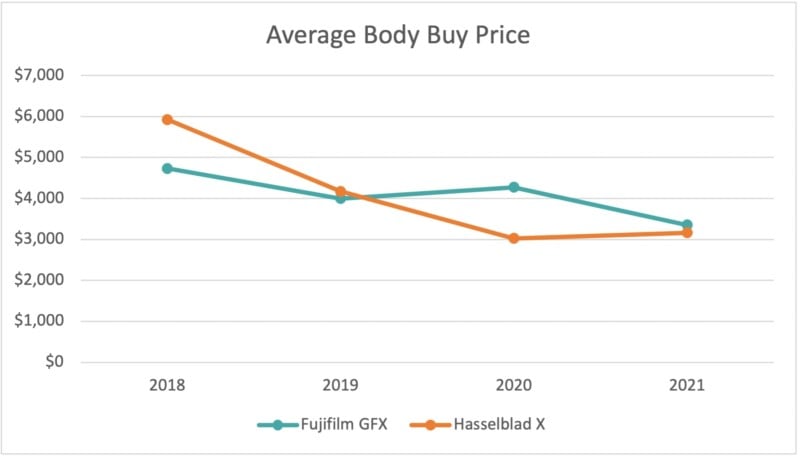 As you can see, body prices for both systems have been declining over the last three years, with Fujifilm seeing a 29% drop and Hasselblad a larger 47% decrease.

Overall, this is an indicator that it pays not to be an early adopter, at least when it comes to saving some dough on buying in. Bodies always take the brunt of depreciation, so no surprises. Having said that, Hasselblad bodies have seen a bigger decrease in price over time.

On the other side of things, let’s look at the average body sell prices over the same period of time. 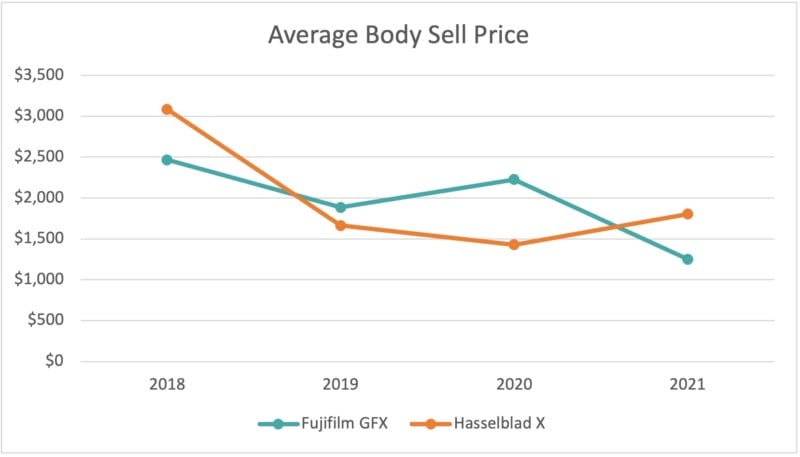 Here, the drop is similar, with Fujifilm dropping by 49% in comparison to Hasselblad’s 42% drop. So, while Hasselblad has seen a bigger drop in buy price, they’ve managed to retain resale value a bit better than Fujifilm, at least when it comes to bodies.

Could be that Fujifilm has simply released more bodies over this span of time, and updated their product lines more often, giving consumers more buying choices and hence driving down market value on older products.

Next, let’s look at the same data for lenses. Here’s the average lens buy price. 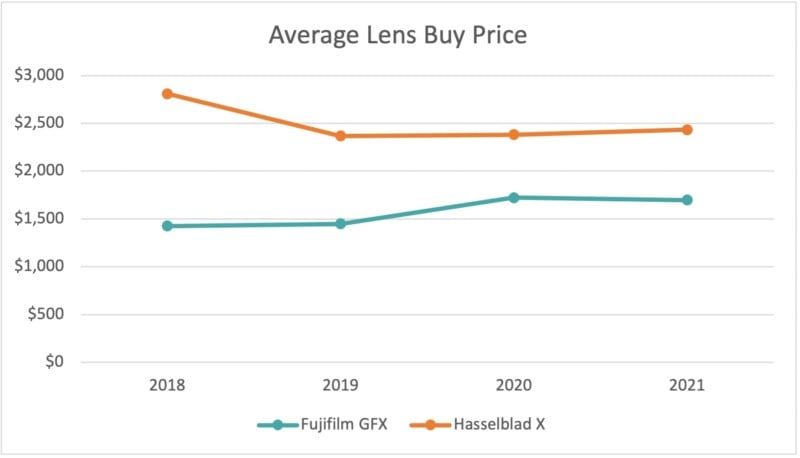 There’s a bit more of a pronounced gap in price between the brands. Fujifilm lenses are generally more affordable than Hasselblad’s, but the trend lines are reversed as far as value.

Fujifilm lenses have increased in price over time by 19%, whereas Hasselblad lenses have decreased by 13%. That gap could be narrowing for a number of reasons, but I think it’s mostly due to the different strategies in filling out their each respective product lines over time.

Let’s see if these trends are also reflected in the average sell prices. 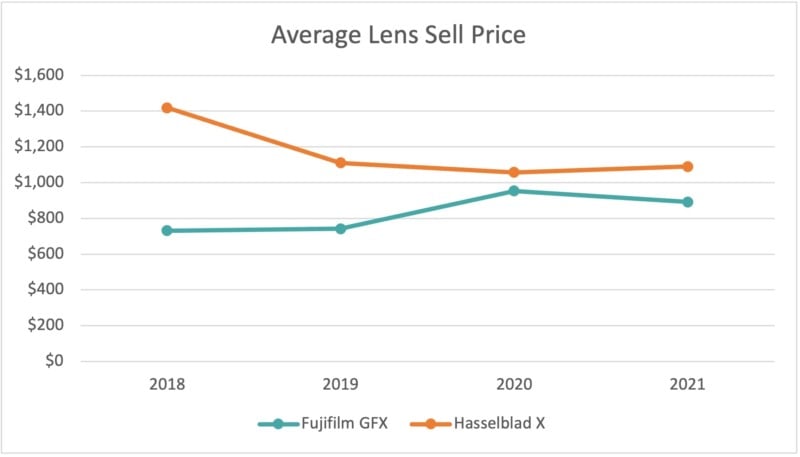 To a large extent, they are similar here as well. The average buyback value for Fujifilm lenses has increased by 22% over the last three years, whereas Hasselblad’s has decreased by 23%. This could mean that there’s more demand for Fujinon lenses, perhaps because more photographers are using the system overall.

Bodies and lenses aren’t the only things that matter when it comes to investing in a system—what about accessories? The cost on things like batteries, lens hoods, and straps add up quickly.

Here’s how they stack up. 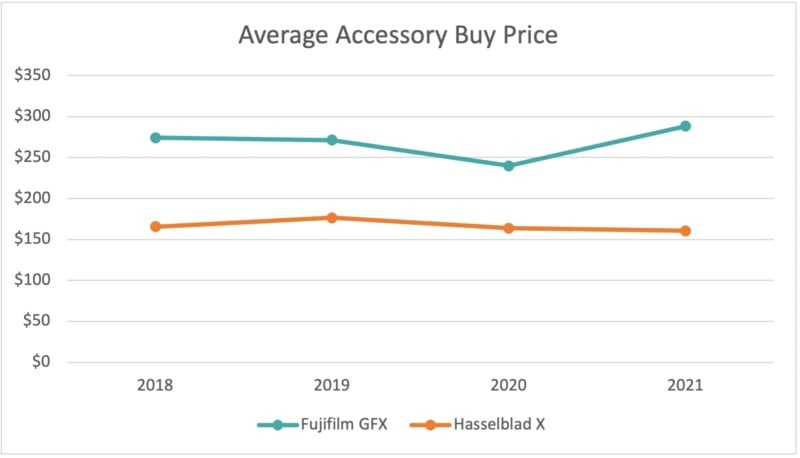 Not a huge change for either brand here. Fujifilm accessories have on average increased by 5% over the last three years, and Hasselblad have decreased by 3%.

Let’s look at the average buy prices next 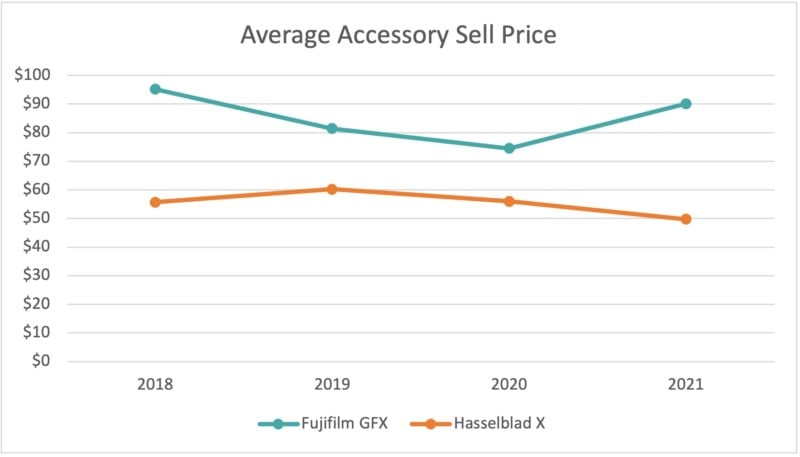 Again, nothing too major here. Both brands have seen a drop, Fujifilm by 5% and Hasselblad by 11%. Overall, the difference doesn’t add up to much, but it is something.

So, overall, I’d say that if you’ve been waiting to get into mirrorless medium format, right now is a good time to be buying used, as prices have come down quite a bit from launch into a more palatable range.

Plus, prices have also seemingly stabilized for the time being, so there’s probably not going to be a huge change over the next few years.

As far as which system seems to be healthier, I’d say Fujifilm probably has a slight edge. And judging by the lens buy/sell prices, it seems to be the system that more people have embraced, which is consistent with sales data. But that doesn’t mean that Hasselblad has been slouching, and overall, I tend to prefer the handling and build quality of their X-mount products.

Ultimately, there’s never been a better time to make the leap into mirrorless medium format. The question is more along the lines of how does it stack up against very capable full-frame mirrorless systems? Is it worth making the switch? But those are questions for another day.